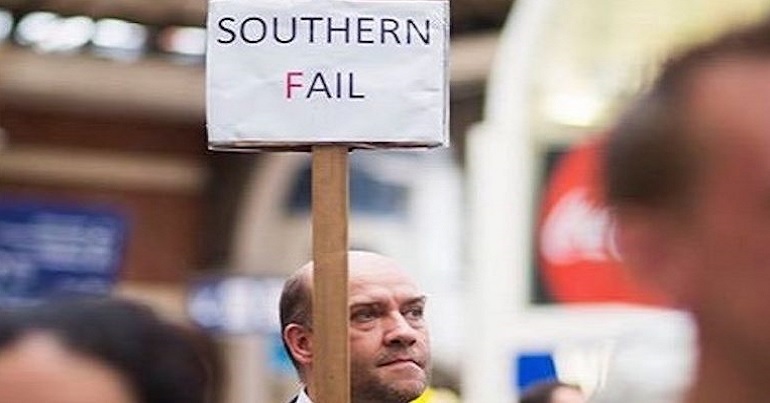 There were chaotic scenes at a Southern Rail station on Sunday 25 February. And it does actually have to be seen to be believed.

Redhill… proved too much for the man (and the women, and the children)

Redhill station in Surrey is on the main line to Gatwick Airport. On Sunday, hundreds of people were left stranded as a rail replacement service effectively collapsed.

One social media user filmed the scale of the problem (although mistakenly laying the blame on “National Rail”):

National Rail MUST pay for our missed flights from #Gatwick Airport. It was a mental and unsafe situation for everyone. I’ve never seen a worse organisation. And there’s still loads of people waiting in #Redhill. Indignant. #nationalrail #nationalrailPAYBACK pic.twitter.com/L2IsiaxaJH

Hey @networkrail @SouthernRailUK this is Redhill Station now. No one can get in or out of the station. Total gridlock whilst people (inc children & older people) struggle to get buses due to engineering work. Doesn’t feel very safe. pic.twitter.com/JS1KmzHG2m

A bus reversing into crowds @SouthernRailUK @BBCNews horrendous situation that could end in tragedy pic.twitter.com/OYXVnyK1bj

They couldn’t make it

The police had to be drafted in for crowd control:

Chaos at Redhill station. Never seen this before. pic.twitter.com/zf5kC0XdOC

Some people put the number affected at 1,000:

People described the situation as “horrible”:

@GatwickExpress @Gatwick_Airport
It's incredible what is happening today in trains to Gatwick. Thousands of people waiting buses during more than 40 minutes, nervous and some of them losing flights. No information available…
Horrible 👎👎👎 pic.twitter.com/o9iFvtlFeA

A spokesperson told the Evening Standard:

We apologise to any passengers delayed at Redhill this afternoon. Demand for the rail replacement service has been greater than expected. We will ensure that plans for upcoming weekend engineering works take a higher capacity requirement into consideration.

Unfortunately for passengers, Southern Rail had some other news for them this past week.

…what’s left of its reputation

We will be bidding for it because I think when we get to the end of the contract people will look back and say we have done a bloody good job… We have delivered all the things we were asked to do and I think we will have changed the face of travelling through London.

They’re leaving. On that midnight train to [insert appropriate location].

But some passengers may not be happy.

As The Canary has been documenting, Southern Rail has been dogged by controversy over the past two years. It’s one of the worst performing rail companies for punctuality. Too often, only around 50% of its trains arrive at their destination at the “right time”. And the 2017 National Rail Passenger Survey named [pdf, p6] it the worst rail company in Britain for “overall satisfaction”.

Meanwhile, it has been locked in an industrial dispute with the Rail, Maritime and Transport Workers union over the introduction of Driver-Only Operated (DOO) trains. Also, these issues are aside from ongoing accusations by the Association of British Commuters, Transport for All, and Disabled People Against Cuts that Southern Rail are breaching the Equality Act 2010 by not providing ‘turn up and go’ accessibility at all their stations, in part because of DOO trains.

The chaos at Redhill is just another PR disaster in a long line of PR disasters for Southern Rail. And with more trade union strike action imminent, the public must be wondering whether the privatisation of our railways in the 1990s was all it was cracked up to be.