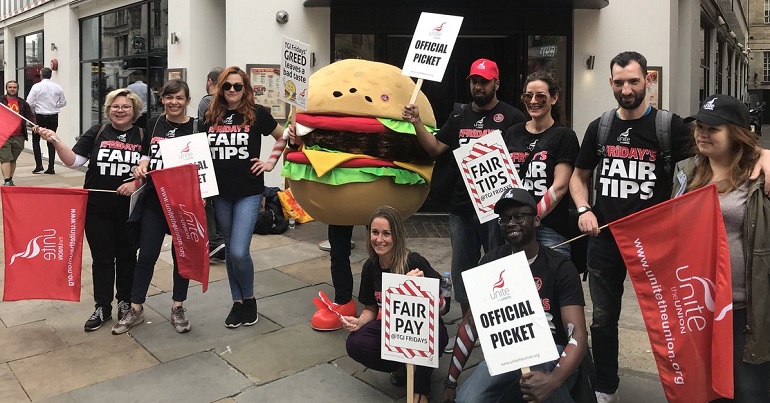 Restaurant chain TGI Fridays is probably ruing the fact it named itself after that particular day of the week, as some of its staff have walked out for a second consecutive Friday. It’s reportedly the UK’s first ever strike over tips.

Members of Unite the Union are on strike at the American-themed restaurant chain in a dispute over the allocation of tips. Currently, 40% of “service charges” (or tips) given by customers on credit or debit cards goes to back-of-house staff like kitchen workers. Members of Unite believe TGI Fridays is doing this to avoid giving kitchen staff a pay rise. So the union staged its first strike at the Milton Keynes and Covent Garden branches on Friday 18 May. Then, on 25 May, those two branches were joined by Piccadilly (central London) and Manchester, with more strikes planned at other outlets over the summer.

All eyes on TGI Fridays

In January this year, we were only given two days’ notice that the tips we receive from card payments are going to be cut by 40 per cent. The reason given? To accommodate the kitchen team’s request of a pay rise by the company. Instead of actually delivering on a pay rise, TGIs has divided the workforce and is subsidising low pay by stealing our tips.

The company is promoting an unfair and unjust tipping system… As for us? TGIs has refused to hear a collective grievance. We believe this is an unfair loophole the company has adopted to minimise labour costs from their own multi-million pound pockets, and instead take hard-earned money from minimum-waged waiting staff.

So, staff walked out of TGI Fridays restaurants on Friday, and took to social media to share their strikes:

Big solidarity shout out to workers @TGIFridaysUK at the Trafford Centre on strike for the first time for the next 24 hours! They’re protesting for #FairPay and #FairTips #AllEyesOnTGIs https://t.co/org3RY4bql pic.twitter.com/ggJVJxxRAY

The strikes are for a good reason. As Baker told Labour List, the situation with tips is:

causing huge financial difficulties for us. Many of us are young mothers and students, and already being paid well below national living wages, both inside and out of London. We have tried to reach out to the head office of the company; we’ve sent multiple emails and letters. But we’ve gotten no sufficient response or action to help minimise the financial strain we are going through.

Our union, Unite, has also revealed that kitchen staff wages are lower now than they were four years ago. In 2014, a senior shift, back-of-house leader was paid £9.35 an hour. Today the hourly rate is just £8.40 an hour, with some staff paid as little as £5.90 an hour.

TGI Fridays’ behaviour is typical of a corporation: sneakily trying to get out of paying staff a decent wage, effectively by robbing Peter to pay Paul – and attempting to divide the workers in the process. But as was seen with the McDonald’s strikes, gone are the days when hospitality staff can be pushed around by the bosses. We’re seeing a new era of industrial action in the UK, and restaurant chains had better watch out.

Featured image via Unite the Resistance