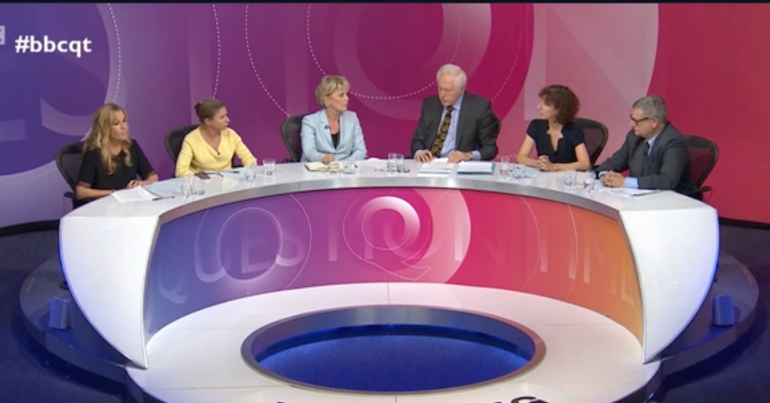 On 24 May, a member of the Question Time audience asked an important question. But viewers were quick to point out that there was a serious problem with the panel answering it.

An audience member asked the panel:

Do you think [the] bastion of white, middle-class, southern privilege spreads beyond just Oxford University?

Being discussed by an all-white middle class panel on the bbc’s flagship current affairs show as we speak. Thanks, you’ve proved my point perfectly! #bbcqt https://t.co/CirZhhwI5G

The question related to a tweet that Lammy himself posted on 23 May regarding a report released by Oxford University into its admission statistics:

My response to Oxford University access data published today. (This thread will be long, and will include facts and figures).

Lammy also tweeted some of the problems the report highlighted:

You are twice as likely to get into @UniofOxford as a white applicant (24%) than a black applicant (12%). Why? 1/4 Oxford colleges did not admit a single black student in a whole year group at least once between 2015-17. 8 colleges less than 1% black. Why?

For four of the biggest courses – Law, PPE, Medicine, Geography – you are twice as likely to get in if you are white compared to if you are BAME. Oxford need to address these institutional failings instead of spinning the figures and blaming the schools or applicants.

Viewers were not impressed

The all white #bbcqt and chair, at least three of whom went to Oxford, discuss the lack of diversity in Oxford. We've reached peak Privilege.

And as others pointed out, the absence of a single person of colour involved in a debate over racism is a real problem:

All white panel on #bbcqt talking about how they think black people experience life at elite universities. That's exactly the problem 😂

If the all-white panel wasn’t bad enough, it got worse. Firstly, when Oxford-educated Lawson was asked if the country as a whole was a “bastion of white middle-class privilege”, he responded: “No, I don’t think it is”:

But it was host David Dimbleby who managed to drag the debate down even further. A member of the audience raised the issue of the panel directly:

We’ve got an all-white panel tonight

Viewers were not impressed:

Audience member; "We've got an all white panel tonight"

As Lammy pointed out, the Question Time panel “proved [his] point perfectly”. All our institutions, whether we’re talking about the media, universities or our police force, need to take a long hard look at how privilege and discrimination permeate through all sectors of society.

Because unless we start recognising and taking action against this entrenched inequality, it will only continue and get worse.