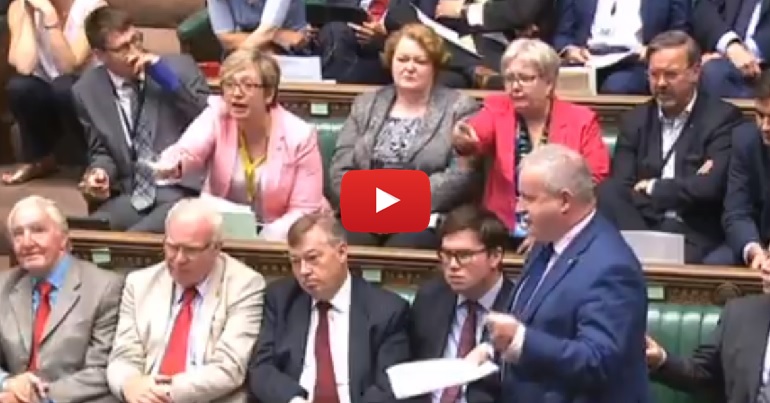 On 12 June, the SNP’s Westminster leader Ian Blackford asked what his party could do to make the government understand Scotland’s concerns about an “unprecedented power grab” during Brexit discussions. And the despicable answer of one Conservative MP seemed to sum up the hostile and anti-democratic attitude of some people on the pro-Brexit right.

As Blackford asked “what options are available to us in this house…?”, viewers could hear Tory MP Ian Liddell-Grainger shout “suicide”:

When @IanBlackfordMP asked the speaker what options are available ( referring to Scotland devolution and the lack of debate) , Ian Liddell-Grainger shouts 'suicide’

What an absolute disgrace. #EUWithdrawalBill

As @IanBlackfordMP raises a point of Order, asking what Scottish MPs can do to ensure proper debate, Tory Ian Liddel Granger shouts “suicide”. This complete contempt is what the Scottish people are up against.

According to the National [paywall], the Mental Health Foundation responded to the comment by saying:

It is regrettable that, on the same day that suicide prevention was being discussed in the Scottish Parliament, an MP would apparently use suicide as a slur towards their colleagues. Language is important and we shouldn’t tolerate this behaviour in any workplace, let alone an elected parliament.

One Green MSP, meanwhile, highlighted the apparent inaction from the Conservative Party:

Tory MP shouts at @IanBlackfordMP that he should consider suicide during last night's debate. In any organisation short of the morally bankrupt he'd have been suspended immediately. In the Tory party, nothing.https://t.co/FdEwvFeUwU

Liddell-Grainger later told Somerset Live that he had “made a remark about ‘political suicide'” and that critics could “take their objections and stuff them”.

The SNP takes a stand against a parliamentary ‘power grab’

When the UK voted to leave the EU, Scotland voted to remain – by 62% to 38%. This included all 32 Scottish council areas. And there is clearly concern in Scotland about the potential effects of Brexit.

The EU Withdrawal Bill – which is at the centre of the Conservative-led government’s Brexit strategy – is one cause for concern. Its aim is to help with a smooth transition when EU law no longer holds sway in the UK. But the Scottish parliament says Westminster is reclaiming power over policy in devolved regions that the EU currently decides. Most policies will fall under the control of devolved parliaments, except for 24 areas. According to the BBC, these include “agriculture, fisheries, food labelling and public procurement”. The Scottish government claims this could prevent it from passing its own laws in these areas for seven years.

At Prime Minister’s Questions on 13 June, Ian Blackford insisted repeatedly that this was a “power grab”. And he said Scottish MPs had not received a real opportunity to debate the issue in the House of Commons:

My SNP colleagues and I were treated to the same braying and disrespect that we receive on a continual basis. Scottish Tories told me to sit down. Let me be clear, the SNP shall not 'sit down' and allow the people of Scotland to be treated in this way. #PowerGrab #PMQs pic.twitter.com/GUT984iJNg

Blackford then took a stand, by refusing to sit down. As a result, John Bercow ordered him to leave the House of Commons. And Blackford’s fellow SNP MPs walked out too.

SNP MPs are simply seeking to represent the views of their constituents. But Brexit has been causing heightened tensions across Britain.

The right-wing media has essentially called the 48% of people who voted against Brexit traitors and “saboteurs“, and judges upholding the law “enemies of the people“. But while a narrow majority of voters opted for Brexit, any suggestion (from pro-Brexit politicians or media outlets) that MPs should be silent and not stand up for their constituents if they voted against Brexit is thoroughly anti-democratic. As Green Party MP Caroline Lucas said on 12 June:

This should not need saying, but:

In a healthy democracy MPs should not be threatened by the media for standing up for their constituents.

And in a democracy people should be allowed to change their minds. #Brexit pic.twitter.com/mUOYcNivlV

SNP MPs have simply been doing their job – standing up for their constituents – and the Tory MP who suggested they commit suicide instead says everything about how little some on the pro-Brexit right value democracy.