After Farage calls medical experts a 'disgrace', one doctor tells him where to go - The Canary 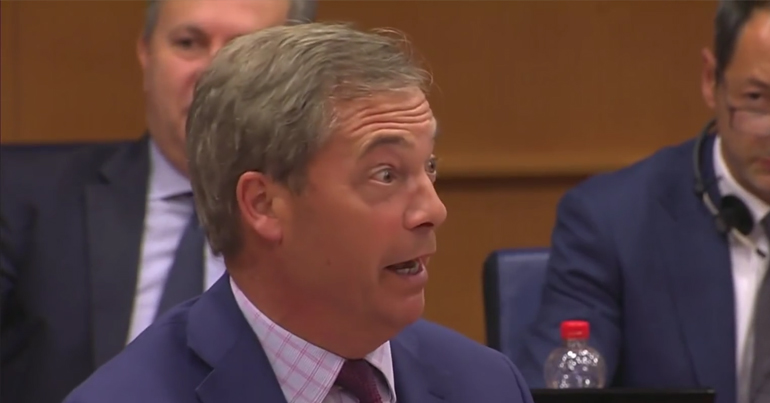 Nigel Farage called the British Medical Association (BMA) an “absolute disgrace” on Twitter. But one doctor didn’t take it lying down. She hit back with a tirade of facts and fury.

The BMA warned that a no-deal Brexit could seriously hamper future attempts to co-ordinate medical responses across borders. In a research briefing shared with the Independent, the association said this could make the UK more vulnerable to infectious diseases. It pointed out that NHS stockpiling of medicines shows the government hasn’t properly thought about the impact of a no-deal Brexit on health.

This is the most extreme form of project fear yet, these people are an absolute disgrace. https://t.co/9J4DJCRQsC

But one NHS professional wasn’t going to let him get away with that claim. Palliative care doctor Rachel Clarke let Farage know what ‘disgraceful’ actually means:

Disgraceful is an NHS hospice forced to close a *third* of its beds because some its nurses – wonderful, extraordinarily kind individuals – feel so unwelcome now in Britain they have been driven home to Spain, Portugal, Italy etc. 2/n

She highlighted the experiences actual doctors and nurses go through with their patients:

Disgraceful is the racism, abuse & hate unleashed by your foul & toxic referendum campaign – and, in particular, the racism towards EU staff we have witnessed, post referendum, in my own NHS hospital. 3/n

Disgraceful is having to look a World War Two veteran in the eyes, as he weeps and trembles with relief that at last – at last – a hospice bed became available for his dying, desperate wife. 5/n

She pointed out that Brexit has been responsible for the NHS “haemorrhaging” staff and not finding replacements:

Disgraceful is the staggering – and sustained – 96% reduction in applications to the NHS from EU nurses since the referendum. 7/n

Clarke ended with a finishing blow that characterised Farage as a man utterly disconnected from real people:

Because patients are vulnerable – so incredibly vulnerable. And if you really were a man of the people, as opposed to the racist demagogue you are, you would show some goddamn humility about the human cost of what you’ve done. 10/10 ends

Clarke is a high-profile doctor who has been critical of many government healthcare decisions. In August 2016, she criticised then health secretary Jeremy Hunt’s plans for a seven-day NHS. She has consistently written about understaffing and underfunding. And her latest indictment – like Clarke’s past opposition to NHS treatment requiring passports – takes on misdirection about problems facing our public healthcare system.

Farage is no stranger to ignoring medical expertise. At the time of publishing, he hasn’t responded to Clarke’s comments. But she said what we’d all love to say to Farage, and she did it perfectly.

– Read more about the NHS at The Canary.