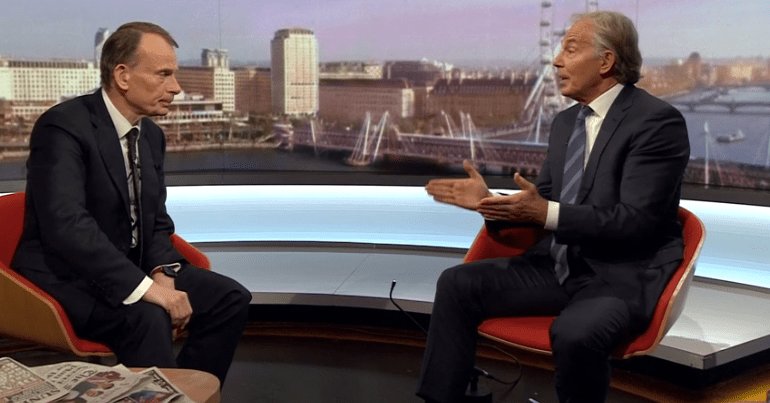 Nobody can quite get over what Tony Blair said to Andrew Marr on 25 November. Arguing for a referendum re-run, Blair tried to illustrate that Theresa May’s Brexit deal is not what people voted for:

It’s a bit me like me having come in as leader of the Labour party and then suddenly deciding I’ve become a Conservative.

But many people hold the view that Blair did just that:

Tony Blair on how the whole debate around a Brexit deal has changed since the referendum:

“It’s a bit like me having come in as leader of the Labour Party and then decided I’m a Conservative.”

Did Tony Blair really say it was 'like me saying I was Labour and then suddenly becoming a Conservative?' I wasn't listening properly. If he did say that it's hilarious because that's exactly what happened. 😂 #marr

Tony Blair, when arguing for a 2nd referendum: 'It's also like me becoming Leader of the Labour Party and then deciding I'm a Conservative.' I feel like he may wish to reconsider his analogy! #Marr

It’s not just Labour supporters that view Blair as Conservative-leaning. When asked what her greatest achievement was, Margaret Thatcher famously said:

Blair carried on the Thatcherite consensus of privatisation and war. As Richard Seymour notes in the Guardian:

On the Andrew Marr show, Blair continued his alignment with Conservative politics. The former prime minister said he had “a lot of respect” for May and that:

Hearing Tony Blair call Theresa May a decent person is why Jeremy Corbyn had to happen. A decent person doesn't inflict austerity on the poor while giving tax breaks to billionaires. #marr

Tony Blair says he "admires" Theresa May, a politician who sent 'Go Home' vans to proudly mixed communities, whipped up lies and bigotry about migrants, deported gay refugees to countries where their lives are at risk, and has helped plunge Britain into turmoil. Yuck.

Blair thinks May, the architect of the hostile environment, the Go Home vans and the Windrush scandal, is "a decent person". #Marr

YouGov has found that almost 60% of British people have a negative view of the former Labour leader. While many are divided over Brexit, people are seemingly united in their dislike of Blair.