The DUP just threatened to bring down the Tory government - Canary 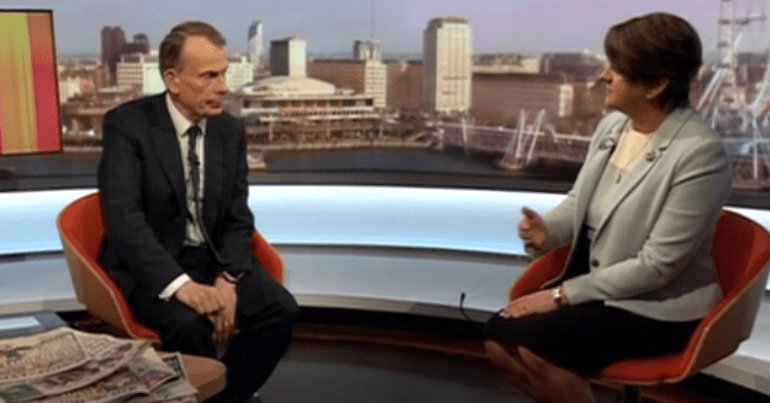 The Democratic Unionist Party (DUP) just threatened to bring down the Conservative government.

Speaking to Andrew Marr, DUP leader Arlene Foster threatened to end the arrangement that enables the Conservatives to govern:

If [parliament] did decide to back this deal, then obviously we would have to review the Confidence and Supply Agreement.

So Foster will not only vote down Theresa May’s Brexit deal, but her party may bring down her government in the unlikely event that the deal passes.

May cannot count on DUP in a confidence vote

The DUP is opposed to the withdrawal agreement because it could end economic alignment between Northern Ireland and the UK.

Underlining this, Foster has also threatened not to support May in a confidence vote should parliament vote down the deal. And without the support of the 10 DUP MPs, May could lose through votes from opposition MPs only. Following that, an alternative government has two weeks to win another confidence vote or a general election goes ahead.

On Andrew Marr, Foster explained how far the deal could diverge Northern Ireland from Britain:

We’re seeing us staying within the European Union in terms of the single market; the customs union rules will apply to Northern Ireland; we’re in same VAT regime as Europe; we’re in the same state aid as Europe. And there is very much a border down the Irish sea as a result of this, and that’s why we can’t support this deal.

On 24 November, Foster said [paywall] that she viewed May’s deal as worse than a Jeremy Corbyn-led government:

I think it is and the reason I say that is on day one of us leaving the European Union there would be no difference, we would be exactly the same as the rest of the UK but in year five or ten we would be different. If people are looking to Dublin for representation in Europe because we’re the subject of EU rules that is so dangerous in terms of the Union . . . All the things we build the Union on — the economic unit, the cultural, social, political and historical start to diverge.

On top of the DUP, many Conservative Brexiteers and Remainers do not support May’s deal. Without support from the DUP and her own ranks, May could have to depend on Labour votes to get her withdrawal agreement through.

But Labour is also opposed. And the party appears to be confident it won’t have many Labour rebels willing to support what is widely viewed as a bad deal.

Even if May gets her deal through parliament, the DUP is threatening to take down the government. All paths are looking seriously precarious for her government now.