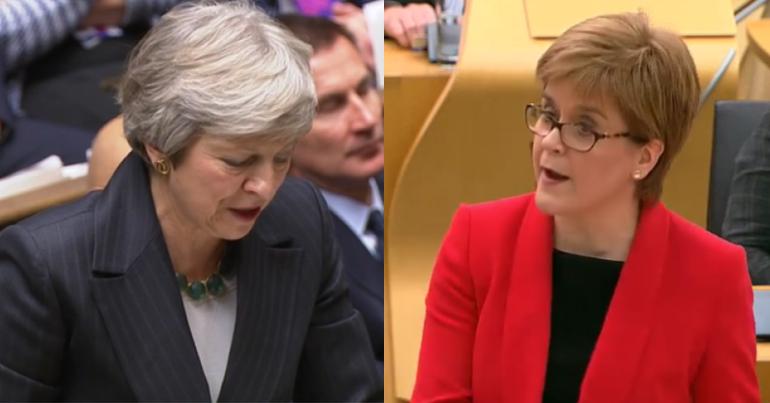 Nicola Sturgeon just challenged Theresa May to a TV spectacle that might actually be worth watching.

The first minister of Scotland threw down the gauntlet to May on 24 November, challenging the PM to a live leaders debate on the Brexit deal. Reports emerged earlier that day that May was considering a live debate with Jeremy Corbyn on the deal.

I can’t speak for @jeremycorbyn, but I’d be up for a full leaders debate on the ‘deal’. So, how about it PM @theresa_may? https://t.co/0mg8R9NCUd

It is fair to say that things have been heated between the two government leaders since the deal was announced. Sturgeon has blasted the PM for overlooking Scotland in the Brexit plan.

May, on the other hand, said the SNP is ‘frustrating’ the will of the British people. Number 10 claimed the Scottish Government had rejected discussions around the deal. Sturgeon quickly rebuffed the “outrageous” claim:

This is outrageous. My office got a call around 6pm last night to offer a meeting this morning – purpose not clear. I wasn’t prepared to cancel my constituency commitments at such short notice for @scotgov to yet again have to hear empty platitudes rather than be listened to. https://t.co/8QGwEKp5Mz

The UK government’s Scottish secretary, David Mundell, has not fared much better. The SNP has accused him of selling out on fishing quotas.

Mundell had repeatedly threatened to resign over various issues relating to Scotland, including fishing. But even his own Conservative colleagues have claimed fishing is not protected, saying the deal is “unacceptable”. Mundell, however, hasn’t yet stepped down.

It’s not all about the SNP though

If the debate was to go ahead, it would give Corbyn the chance to debate May freely, without the constraints of Prime Minister’s Questions (PMQs).

It would also throw up the possibility of seeing DUP leader Arlene Foster take on the PM directly. With the Confidence and Supply Agreement between the parties seemingly on the rocks, this could be a damaging aspect for the government.

In the run up to the 2017 general election there would have been little chance of a debate going ahead because May refused to take part in them. But, in phone-ins on LBC and 5live, we have seen a slightly different May who shows a willingness to be seen to be reaching out. She has also written to the public asking for Brexit backing.

With the proposed deal in trouble, this could be a gamble the PM is willing to take. I for one will be tuning in if she does.