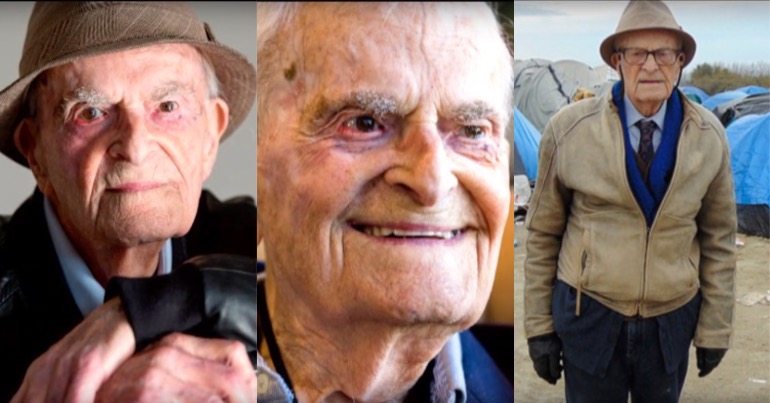 Few people have managed to unite in admiration people in and outside politics quite like Harry Leslie Smith. Not only in the UK but around the world too.

The outpouring of solidarity in the wake of his passing is a testament to this and his socialist legacy.

The message we hoped would never come

Thousands of people across the UK and the world have waited with bated breath for news as the veteran political campaigner fought against ill health in a Canadian hospital.

His son John stayed by his father’s side and provided constant updates on Harry’s changing situation to a watching world. And, for a while, it seemed as though he was on the mend.

Harry had a good night last night according to the nurse, less agitated, but looks very tired. #istandwithharry

But, sadly, this hope was short lived and John warned of what was coming.

At 3:39 this morning, my dad Harry Leslie Smith died. I am an orphan. #istandwithharry

But despite all the sadness it’s heartening to know that until his last moments he was happy.

Before losing consciousness I was able to play the clip below to my dad and when he heard his name being chanted he smiled with pleasure. https://t.co/qwHh0iUUoR

Harry reached many people, whether through books such as Don’t Let My Past Be Your Future or via his prolific use of social media. The huge outpouring of condolences shows how many lives he touched.

After he dedicated so much of his existence to encouraging social solidarity, it’s hard to think of a better expression of his dream than the coming together of people to celebrate his life.

The BBC put together a moving tribute video of Harry’s life and politics.

We will all miss Harry Leslie Smith – he was one of the giants whose shoulders we stand on.

A World War Two veteran who dedicated his life to fighting for our National Health Service, a peaceful world and for countries to meet their moral responsibility by welcoming refugees. pic.twitter.com/1RW63dSa6Y

And he took Harry’s legacy to parliament:

"We thank Harry for his life and his work" – @jeremycorbyn pays tribute to his friend and "irrepressible campaigner" Harry Leslie Smith, who has died aged 95https://t.co/uVYTlIPDo7 #PMQs pic.twitter.com/nPXqnwF6G2

The general secretary of the Labour Party, Jennie Formby, succinctly described that the best tribute we can pay Harry in death is to continue his work:

The best tribute we can pay to this remarkable, warm, inspirational man is to continue his relentless fight for justice.
RIP Harry 💔
⁦@Harryslaststand⁩ https://t.co/CxikwAyh7x

And as others added, a practical way to achieve his ambitions is to campaign relentlessly to bring about a government Harry could be proud of:

In the final few years of Harry Leslie Smith's life he supported Jeremy Corbyn because he knew a good man when he saw one. The best tribute we could all pay Harry is to elect a socialist Labour government that will end austerity and prioritise compassion. #IStandWithHarry #JC4PM https://t.co/SY2I6UFjqs

Harry had the attitude needed to bring about change

As Ed Miliband said, it was Harry’s attitude that makes social change possible:

Very sad to hear of the death of Harry Leslie Smith. He was one of a kind who never wavered in his fight for equality and justice. We should all carry his passion, optimism and spirit forward.

And as the rapper Lowkey reinforced, using Harry’s own words, social justice is within our grasp but only if we make it a reality:

Rest in peace to a giant of our times. Harry Leslie Smith, we stand on your shoulders now. #IStandWithHarry pic.twitter.com/PwDz4T8xml

What fighting in war taught Harry

Others chose to acknowledge Harry’s views on Brexit. After all, he wrote of the lessons he’d learned whilst fighting fascists to liberate Europe during World War two. He warned us that:

the madness that created this war came from social and economic divisions that had beset Europe in the 1930s. It had created a pandemic of populism and nationalism that raced through Germany, Spain, Austria and Italy killing democracy and all its institutions.

For me the tragedy of Brexit is that it was the blood, sweat and tears of my generation that helped forge a more perfect union between Britain and Europe. Now that appears lost and our country feels shorn of hope because hollow words of rich Tory politicians will never replace the benefits in trade, culture, workers rights, and security we derived from being a member of the EU.

Harry Leslie Smith has died. He was 95, but he saw much more clearly than so many. Here's his piece for The New European – brilliant and inimitably direct. God bless you @Harryslaststand https://t.co/4QADxRJM98 pic.twitter.com/a2C3GMSLAM

The embodiment of socialism

As Ash Sarkar added, Harry embodied all that socialism aspires to be:

Devastating news that @Harryslaststand has passed away. He taught all of us that socialism is based on empathy, sincerity, and a tireless commitment to do right by people that the establishment would have us demonise.

He will be sorely missed. #IStandWithHarry

Another Twitter user poignantly posted that if Harry fought for social justice in his twilight years, after already giving so much of his life, then what excuse do we have now?

Harry Leslie Smith gave our movement his twilight years. Do one thing that challenges injustice today, and do it in Harry's name. Then do another thing tomorrow. #Istandwithharry

As actor Samuel West noted poetically, Harry passed on the birthday of another visionary:

I hope Harry would appreciate the rightness of leaving us on William Blake’s birthday #IStandWithHarry https://t.co/gPAdnUeMIQ

Like so many others, MP Chris Williamson remembered Harry best for his moving speech at the 2014 Labour Party conference.

Very sad news about @Harryslaststand He was wonderful, beautiful man and a model of human decency. RIP comrade, we will always remember you. https://t.co/gsyuwTpXbJ

You can see his speech in full here:

The lessons of Harry’s life

Harry was a rare link between a stark political past and present. Few people are still alive who clearly remember an age before the NHS and a welfare state. His harrowing account of that bygone era serves as a poignant warning of the suffering people will face again if they don’t fight for socialist institutions. As he warned, ‘don’t let my past be your future’ and “we must be vigilant. We must be vocal”.

It’s all too easy to forget that the social deprivation experienced by Harry in his youth is only a blink away in the passage of time. And so it’s up to all of us to make sure that political laziness does not allow it to return.

Harry seemed to be a beautiful and pure human to his core. He’s an example to all of what we can be if we so choose.

His death was political, as was his life.

Never forget that my dad, Harry Leslie Smith died in the warm and caring arms of public health care.

From everyone at The Canary, we wish Harry’s family all the best during this difficult time. And to Harry, wherever you are, keep being a rebel comrade.