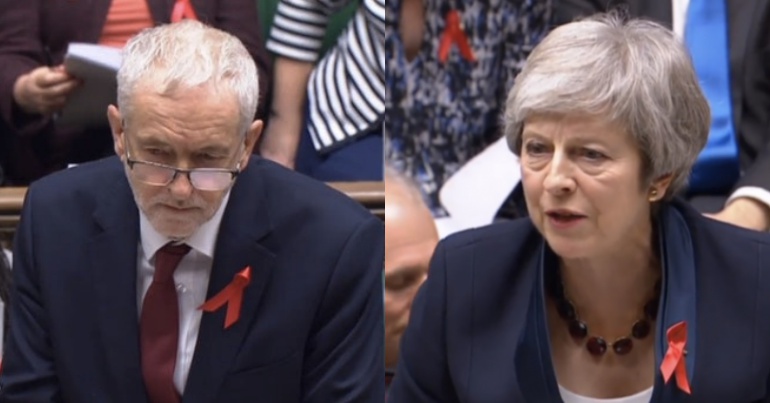 No matter how many times May repeats that her deal “is the best deal” as Corbyn pointed out, this reveals a simple truth:

Well… it’s not hard to be the best deal if it’s the only deal. By definition… it’s also the worst deal.

This was met with roars of laughter in the Commons:

Jeremy Corbyn on #Brexit: "It's not hard to be the best deal if it's the only deal"

Theresa May: "What does Labour have to offer? 6 bullet points. My weekend shopping list is longer than that"

And many people on social media agreed that Corbyn ‘bossed’ it:

Great line from Jeremy Corbyn on the PM's deal: it can't be the best deal if it's the only deal, because, by definition, it is also the worst deal. The Labour leader is bossing Brexit #PMQs.

Great line from Jeremy at #PMQs – it’s not hard for May’s deal to apparently be the ‘best deal’ if it’s the only one. It’s also technically the worst deal if that’s the case. And it certainly is the worst of all worlds. Time for this pathetic government to stand aside.

Faultless logic from @jeremycorbyn that the only deal in town has to be, by definition, the best deal in town. #brexitchaos #PMQs

Some pointed out, Corbyn’s logic even made cabinet ministers ‘smirk’:

Corbyn was on a roll and he didn’t stop there. He pushed May further saying:

Good line from Corbyn at #PMQs just then.

An absolute zinger from Jeremy Corbyn at #PMQs as he tells the incompetent Theresa May:

Just call an election Theresa and put us all out of our collective misery.#PoliticsLive

He also raised the fact that May’s spin seems to be in direct opposition to her chancellor Philip Hammond. According to Hammond, all Brexit outcomes, including May’s deal mean the UK will be worse off “in pure economic terms”. As Corbyn said:

The chancellor,however, said that her deal will make people worse off.

He also pointed out that Hammond wasn’t even there. But May didn’t seem to have an answer for that. She repeated – again – that (yawn) this is “the best deal”.

Since announcing her Brexit deal on 14 November, May has thrown Britain into Brexit chaos. Yet she’s clung on to power despite seven resignations and many MPs – including Jacob Rees-Mogg – openly calling for a vote of no confidence. There’s been widespread criticism of the deal both from many Conservatives and all opposition parties. As Corbyn said, this is “the most shambolic government in living memory”:

This is the most shambolic government in living memory.

And Corbyn’s lines at PMQs leave what little credibility her Brexit plan tattered even further.