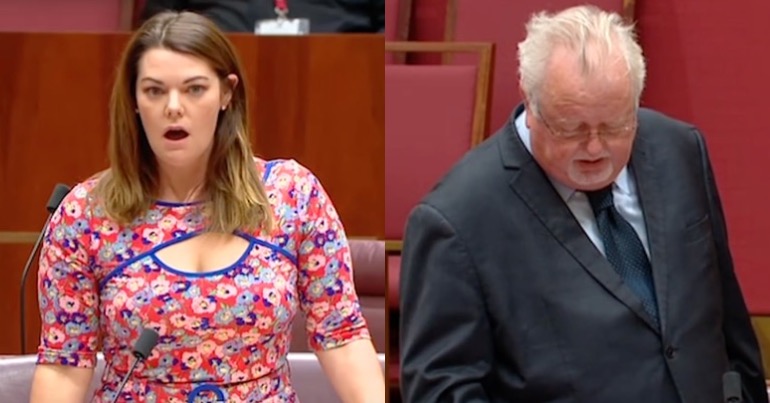 There were extraordinary scenes in the Australian senate on 27 November, as Green senator Sarah Hanson-Young unleashed a breathtaking takedown of what she called “sexist”, “slut-shaming” and “bullying” behaviour by male colleagues.

The dispute was the culmination of what the South Australia senator called a “pattern” of abusive behaviour. And she directed this devastating line at her colleagues:

She then concluded by naming all the offenders one by one.

The incendiary senator speaking at the start of the video is Barry O’Sullivan of the Liberal National Party – the equivalent of the UK’s Conservative Party. O’Sullivan says, referring to Hanson-Young:

There’s a bit of Xenophon in her and I don’t mean that to be a double reference.

O’Sullivan was referring to former senator Nick Xenophon, and he seemed to be making a crude innuendo about the politician and Hanson-Young.

A history of political abuse

This is not the first time Hanson-Young has endured this kind of treatment. As the ABC reported in July, after Hanson-Young discussed easing restrictions on pepper spray to allow women to defend themselves from attacks, a colleague allegedly shouted:

you should stop shagging men, Sarah.

She then claimed she was sworn at when she confronted the individual in question.

Hanson-Young was not a lone voice in the chamber, though, as fellow senator Larissa Waters showed her support:

Fellow senator and Green leader Richard Di Natale, meanwhile, angrily called out the abuse. At the start of the above video, you can hear him calling O’Sullivan “a pig” in response to his comments.

Here is the moment senators O'Sullivan, Anning and Leyonhjelm walked out as Greens leader Richard Di Natale spoke about the treatment of women in the Senate #auspol pic.twitter.com/2zNAQqfuwP

After his intervention, Di Natale was suspended from the chamber for disorder over his ‘pig’ comment.

Senator Hanson-Young embraces Senator Di Natale after he spoke about her treatment in the senate. Yesterday Di Natale was suspended for calling Senator O'Sullivan a pig and for accusing him of throwing "sexist filth" at his colleagues pic.twitter.com/F3BVrFKAjQ

And others were exasperated that the Australian Labour Party supported his suspension too.

Hanson-Young later stated in an interview with Junkee that:

I was angry because I am sick of being targeted by some men in my workplace who, rather than debating ideas with polices, reason and fact, resort to personal insults and sexualised taunts.

She also said during a podcast for the Guardian that:

They used to be things that people would whisper to me in the chamber, designed to shut down my confidence… they’re now just shouted across the chamber.

She also previously gave a moving speech on the need to legalise same-sex marriage in Australia, which has since occurred.

This latest incident is a fresh reminder that, despite the claims of sceptics, sexism is alive and kicking around the world – whether in ‘Western liberal democracies’ or elsewhere.

For Hanson-Young to show such defiance in a male-dominated environment like the Australian parliament takes bravery. And it was a real insistence that Australian women – and women everywhere – deserve so much better.