Theresa May nearly lied to the country about Brexit. Again. - The Canary 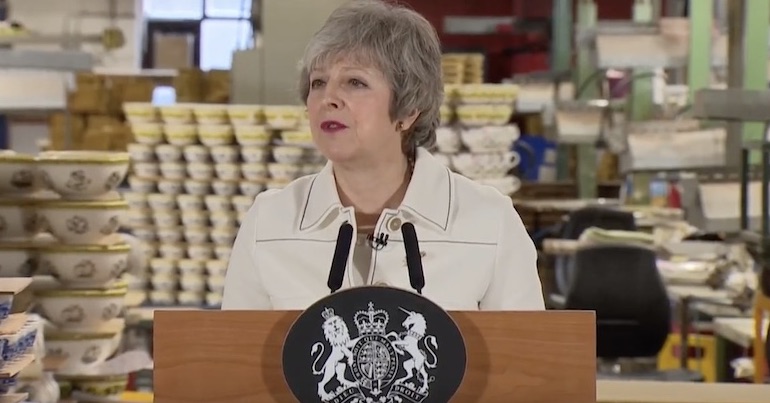 On 14 January, Theresa May gave a major speech ahead of the crucial Brexit vote on 15 January. It was May’s final chance to unite a divided party and sell her deal. But a key part of her original speech was based on a complete lie – a fact that she, and the mainstream media, ‘conveniently’ forgot.

“When the people of Wales voted…”

Many people shared extracts of May’s speech ahead of delivery:

some extracts from May’s speech in Stoke tomorrow, fascinating point about the original vote for a Welsh assembly pic.twitter.com/PKvsgd4ONV

When she actually delivered the speech in Stoke, May amended this slightly and said:

When the people of Wales voted by a margin of 0.3%, on a turnout of just over 50%, to endorse the creation of the Welsh Assembly, that result was accepted by parliament.

She omitted the original line in the pre-shared text that the result was “accepted by both sides and the popular legitimacy of that institution has never seriously been questioned”. But there’s still watertight and valid ground to challenge May’s position.

uh oh….Theresa May claims in her speech that Parliament accepted the result of the Welsh devolution referendum.

What she didn't say, was that she voted AGAINST accepting the result, and the Tories went into the 2005 election promising a SECOND REFERENDUM in Wales…. pic.twitter.com/7Km9lTRjqF

Even in the speech that she gave, May totally failed to acknowledge that she – and many other Tories – actively tried to block the results of the 1997 Welsh referendum.

In fact, Theresa May and 30 other current Tory MPs voted against the creation of the Welsh Assembly in December 1997 despite the new body being approved by a referendum just three months earlier.

As late as 2005, the Conservative Party offered a second referendum on the Welsh Assembly in its election manifesto.

May trying to use Welsh devolution to encourage people to support her botched Brexit deal wasn’t a clever move. Her edited claim that it was “accepted” clearly doesn’t reflect the full picture.

The New Statesman‘s political editor was one of the first to point this out on social media:

The Conservative Party voted not to proceed with creating the Assembly *after* the referendum! https://t.co/ItV1q8VCQN

It will be *very* interesting to see if that line now makes it into May's speech.

If it does, I wonder if any MP will ask if she's willing to rectify her speech with the actual facts of the matter?

If it doesn't, I wonder if any will ask why it didn't?

Ahead of her speech, many political journalists commented on May’s track record. Even the BBC‘s Laura Kuenssberg called it “awkward”:

Awkward PM is mentioning everyone accepting result of Welsh referendum – this is from Conservative manifesto 2005
we 'will work with the Assembly and give the Welsh people a
referendum on whether to keep the Assembly in its current form,
increase its powers or abolish it'

Yet not a single journalist – Kuenssberg included – asked May about this in press questions following the speech:

Not a single journalist in the room questioned May on her earlier statements about Welsh devolution. I guess that event has just been thrown down the memory hole then?

Every time I think we've seen Peak May, she outdoes herself: opts to tweak the Welsh Assembly line in a way that changes it from a falsehood to a non sequitur.

The statements made in advance of May’s speech and their subsequent redaction when they were found to be false shows the desperate position that the PM finds herself in. She is obviously still not in command of her own party and clearly knew ahead of time that the mutual letter exchange with the EU wouldn’t materially change anything – the “backstop” remains, as it always has been, the baseline position until and unless another agreement is made.

“Mislead, bluff, bluster, fudge, capitulate and then move on to the next error”

This is not the first time May misled people over Brexit. She’s continued to bend parliamentary rules for her own purposes. In December 2018, MPs “passed a historic motion to hold the government in contempt” in order to force May to publish the Brexit legal advice in full. Labour’s Keir Starmer said, after reading the documents, that it was “unthinkable” May’s government tried to hide them:

It is unthinkable that the Government tried to keep this information from Parliament – and indeed the public – before next week’s vote. 3/3

Then only days later, May delayed the ‘meaningful vote’ on Brexit until January, because she knew she’d lose.

Dalzell said that, “even in desperate times”, it’s “concerning” that May would even “attempt to mislead people to this degree as if the Internet and other permanent records did not exist and statements could not be checked in real time”. He continued:

It is not, however, surprising. In this single event is an encapsulation of the UK’s entire approach to Brexit from the start. Mislead, bluff, bluster, fudge, capitulate and then move on to the next error. This does not bode well for the next stage of Brexit and the trade negotiations to come.

And he’s quite right. May nearly lied. Yet she, and most establishment media outlets, simply pretended it hadn’t happened, as though a quick edit could fix it all. This is the same woman ‘negotiating’ and (allegedly) leading the UK through one of its most important political moments in history.