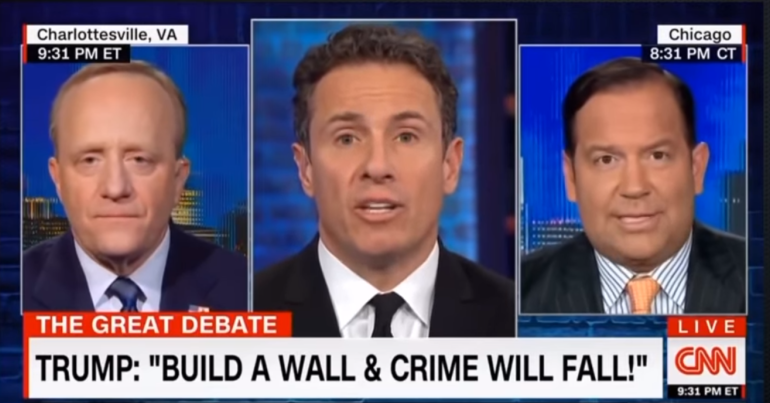 CNN’s Chris Cuomo is the latest establishment journalist to break ranks and slam US media propaganda about Venezuela.

Cuomo was debating Donald Trump’s proposed border wall with CNN colleagues Steve Cortes and Paul Begala on 24 January. And Cortes, who served on Trump’s National Hispanic Advisory Council, suggested that all crime from undocumented immigrants was “100% preventable”. But Cuomo quickly hit back, telling him:

How is poverty 100% preventable? What are you going to say, socialism? Because take a look at Venezuela.

According to his Twitter feed, Cortes was keen to shoe-horn Venezuela into the debate since, in the midst of an ongoing US-backed coup, now “might be a big break, at last, for suffering Venezuelans”.

But after Cuomo’s stunning response, he’ll be regretting he ever mentioned it. Because Cuomo offered some much-needed clarity about Washington’s role in fostering crisis in Venezuela. Slamming the US strategy, the presenter said:

You starve these countries of support. Then you create environments on the ground where they can ball up. And then you stand back and watch them burn. What are we gonna do there now?

ok how is CHRIS CUOMO giving a better response to the “BUT VENEZUELA!” people than like 90% of progressives and even many Democratic Socialists pic.twitter.com/PruGNoog9H

His comments were backed up on 27 January, when former UN rapporteur Alfred de Zayas told the Independent that US sanctions on Venezuela could amount to “crimes against humanity”. He had previously claimed that US sanctions are “economic warfare” that damage the Venezuelan economy and kill citizens.

Many praised Cuomo for breaking ranks with the mainstream media narrative on Venezuela on live television.

Journalist Jules Suzdaltsev called it a “slam-dunk rebuke of nonsense”:

.@ChrisCuomo’s slam-dunk rebuke of nonsense right-wing talking points like “BULD THE WALL & CRIME WILL FALL” and “VENEZUELA!!” is so refreshing that I genuinely feel bad about beefing with him yesterday.

I hate to admit this but Cuomo is… good, folks.pic.twitter.com/VcEaRUklj0

Others praised Cuomo’s straight-talking style. And someone even quoted Leonard Cohen:

“There is a crack in everything, that’s how the light gets through.”
Even on @CNN @ChrisCuomo #poverty #venezuela https://t.co/bXZLbLEm9c

If more mainstream journalists spoke so frankly about US foreign policy, perhaps the US would think twice about continuing economic sanctions and orchestrating another coup in Venezuela.