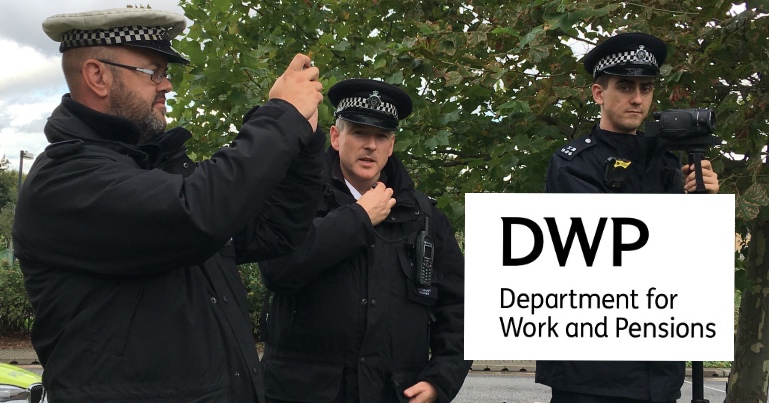 In December 2018, a film released by the Network for Police Monitoring (Netpol) exposed the fact that the police were passing on footage of disabled anti-fracking protesters to the Department of Work and Pensions (DWP).

Disability News Service (DNS) followed up the revelations in the video. And Lancashire Police confirmed it “had passed on information” to the DWP. DNS then asked the DWP, via a freedom of information request, how many police forces were effectively spying on protesters. But the DWP refused to answer.

“A year’s worth of footage”

One protester in the film told shadow chancellor John McDonnell:

The police have given the DWP a year’s worth of footage of everybody who’s been up there on benefits.

McDonnell was adamant in his response:

This wasn’t the only case highlighted in the film. Another protester said that a police officer said he was:

duty bound…to phone up Motability, and tell them that we’ve had this discussion…because you’re using the car for illegal purposes.

Solicitor Raj Chada said that no criminal offences had taken place and that:

What instead this is about… is intimidation and preventing people from using their right to free speech.

The video also highlighted the way police forces have targeted disabled people for arrests and assaults. You can watch the full video here:

Tip of the iceberg?

But these examples may just be the tip of the iceberg. According a person that DNS spoke to, “quite a few” people had been called in for reassessment following the police handing over footage to the DWP.

After the police’s threat to inform the DWP about her car, the woman in the film lost her vehicle, was interviewed under caution, told she had to repay £6,000 and a file was passed to the Crown Prosecution Service. She said she was asked at interview about “walking a few steps forward and then a few steps back, and about being seen leaning on a bicycle as she walked up a hill”. But as she pointed out to DNS:

What they were saying was absolute rubbish. Where are the photos of me falling over, me sleeping for 12 to 16 hours?

And she is clear why the police are doing this:

The freedom of information request from DNS asked the DWP which police forces passed on footage of anti-fracking and anti-austerity protesters. But while Lancashire police acknowledged it had passed on information, the DWP refused to supply any details.

Instead it claimed an exception under section 30 of the Freedom of Information Act. This is a clause that:

can only be claimed by public authorities that have a duty to investigate whether someone should be charged with an offence, or the power to conduct such investigations and / or institute criminal proceedings.

But as DSN highlighted, the Information Commissioner’s Officer has ruled that:

Where there would be no harm in releasing the information, or the public interest arguments in favour of disclosure outweigh those in favour of maintaining the exemption, it will need to be disclosed.

Speaking to The Canary, Netpol’s coordinator Kevin Blowe was clear what this refusal means:

If the DWP refuses to name the police forces giving it information about disability benefits claimants who take part in protests, it is only safe to assume this means all of them are doing so.

Blowe further stated that this is a tactic of “deliberate intimidation”:

This fits a pattern of tactics that campaigners we talk to believe is deliberate intimidation, aimed to deter their participation in protests. It is matched by stories we have heard of parents facing threats to report them to social services for bringing their children to a protest, invariably where the only real risk of violence, in the case of anti-fracking protests, is from the police themselves.

And he pointed out that:

This is not facilitating the right to freedom of assembly. This is using police resources to interfere in people’s lives in order to disrupt their ability to express their political opinions.

The implications of the police effectively spying on protesters for the DWP is horrendous. It is sending the message that disabled people do not have the right to protest and it is a deliberate attempt to scare people away from protesting.

As McDonnell said in the Netpol video, it is vital that this is exposed and challenged. And the DWP needs to start by revealing exactly how many police forces have passed on footage and how many people this affects.