The kids are revolting. They're leading the way and they're incredible. - Canary 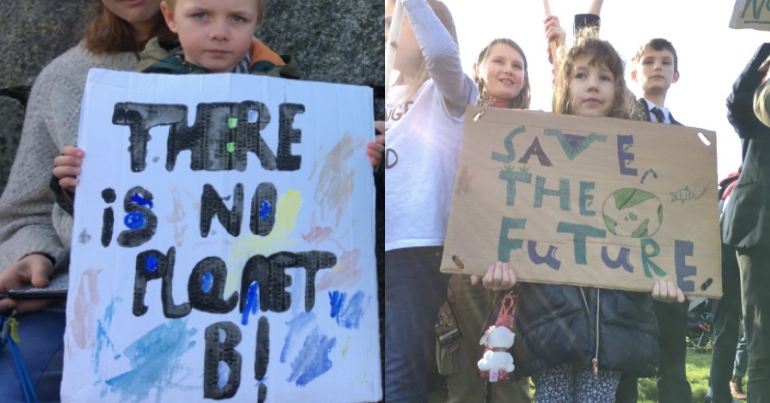 On 15 February, children walked out of schools across the UK as part of the School Strike 4 Climate. The Canary witnessed the incredible power and energy as over 600 children and parents in Cornwall took action to protest against global climate chaos

Save our planet. Save our world.

Swedish 16-year-old Greta Thunberg has inspired children around the world. She’s been on strike, leaving school every Friday, since August 2018, to “urge leaders to do more to tackle climate change”. The movement has grown globally, and on 15 February, children around the UK marched out of school in their thousands to share their rage and demand that the government takes urgent action.

Hundreds of children gathered outside Truro County Hall. They lined a busy road, waving homemade banners and chanting, “save our planet, save our world”. As car drivers hooted horns in support, the children shouted louder.

But two small boys were close to tears as they shouted at drivers, “stop driving your cars, you’re killing us”. Witnessing this combination of both rage and pain from the children throughout the protest was incredibly poignant. As ten-year-old Zennor told The Canary:

One of the strike organisers, 17-year-old Rosie Smart-Knight, a student at Truro College, gave the first of many impassioned speeches. Children shared their sense of urgency and their heartfelt concerns about climate crisis.

“In 2018,” she stated, “the UN announced that we have 12 years left to limit the effects of the climate crisis”. She continued:

And yet, somehow, we are still facing apathy and confusion. Greta Thunberg reminded us of the urgency of the situation by saying ‘the house is on fire’. More than that though, our home is on fire. And we need to stop it. The climate crisis is the defining issue of our generation. It should have been the defining crisis of the generation before us – or even the one before that. But today, we are breaking this cycle of passing problems onto the next generation. Today we say enough!

Her speech was met with cheers and roars from the hundreds of children gathered. At this point in the day, none of the children knew that Theresa May and the government “slammed” the strike. Yet the children had an important message to deliver to those in power. As Smart-Knight said:

We ask them to remember their duty to protect us and our future. And to recognise that they must take responsibility for the crisis we are in and then work to fix it. So to the government we say this: enough. We are young, we are here and we will be heard… we expect action from the people who are supposed to look after us. No more excuses. No more inaction. We want a future and we will fight for it.

After these words, the crowd erupted chanting “we want a future, we will fight”.

May, the UK government and, indeed, leaders around the world need to listen to these children. Because they are a powerful force: their voices and actions grow stronger day by day. As they must. Because time is running out.