In between the glitz, the real stars spoke out at the BAFTAs - The Canary 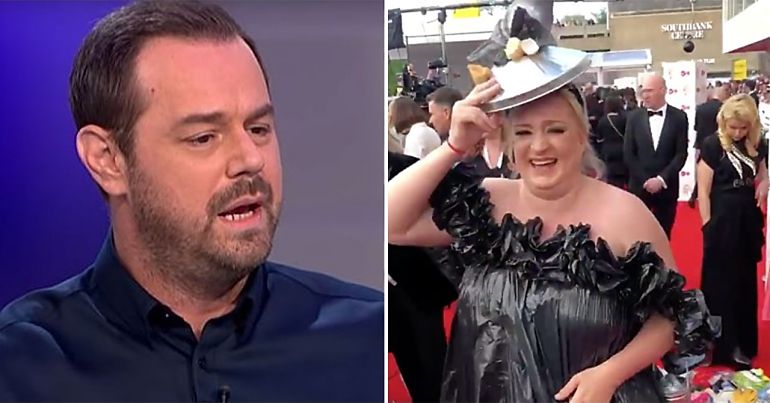 On 12 May, the usual array of stars gathered for the British Academy of Film and Television Arts (BAFTA) awards. But this year, beyond the glitz, some stars used the platform to highlight important political messages.

In June 2018, EastEnders star Danny Dyer perfectly captured the feelings of many people when he questioned the “mad riddle” of Brexit. He also called former PM David Cameron a “twat“. And with no end in sight to Brexit chaos, Dyer’s sharp analysis is the gift that keeps on giving.

Asked to present the ‘Must See TV Moment’ award alongside Holly Willoughby, Dyer asked if he’d been nominated. As Willoughby replied “no”, Dyer responded:

I should have been nominated for calling Cameron a t***, but we’ll let it go. We’ll let it go for now. They did tell me not to say it

Dyer clearly spoke for many people. Some called him a “working class hero”:

Danny Dyer is miffed about missing out on the Bafta for memorable moment after he called David Cameron a "twat". "They told me not to read it out," he said.

Others, meanwhile, suggested he deserves a knighthood:

Knighthood for this chap please

Because Cameron’s actions won’t ever be forgotten:

Danny Dyer is right though, David Cameron is a twat. He ran away from office when the vote didn’t go the way he wanted and to me he will always be that coward who ran away.

Although much of the corporate media went into a frenzy over who wore what on the red carpet, there was a clear winner this year. Daisy May Cooper stole the show.

Instead of spending a fortune on an expensive designer dress, she wore bin bags. Her full-length gown, strewn with rubbish, was made by her mother and friends. When asked by the BBC what she was wearing, Miller said:

I am wearing 60-litre bin bags… There is a reason behind it… I thought rather than spending money on a dress this year, I’d donate it to a local foodbank.

🗑 “Who are you wearing?”… “My mum…” There’s a good reason behind Daisy May Cooper from #ThisCountry’s #BAFTATV outfit. pic.twitter.com/OjVcjaj13a

Be the Daisy May Cooper you need to see in the world https://t.co/EZdLnJ1VOA

the fact that daisy may cooper turned up to #baftatv in a bin bag dress made by her mum and donated what she would have spent on a dress to a food bank… the definition of iconic pic.twitter.com/yKW1VoX55l

We have a lot of love for #DaisyMayCooper this morning: last night at the #BAFTAs she rocked a dress made from bin bags and rubbish so she could donate the cost of a real dress to a local food bank. #respect #foodwaste #EatGood #DoGood @FareShareUK https://t.co/RQYKesVyX5 pic.twitter.com/PCmuntS0o2

The other stand-out moment at this year’s BAFTAs was Channel 4 News winning an award for its undercover work on the Cambridge Analytica scandal.

So the award was well-deserved:

Congrats to everyone @Channel4News for our @BAFTA win tonight and thanks and huge respect to @chrisinsilico everyone at the @ObserverUK & @nytimes but massive respect and love to our undercover team pic.twitter.com/nJR891Lx0g

Christopher Wylie, one of the key whistleblowers who helped break the scandal, also celebrated the award:

It’s amazing to remember all the days stressing out in the @Channel4News boardroom about whether an undercover Cambridge Analytica operation would even work. And now they won a BAFTA! Congrats! https://t.co/cpo7GF55cl

Since Trump took power in the US, actors have increasingly used the Oscars and Golden Globes as a political platform. This year, several UK actors seemed to follow this trend. It’s timely, much needed, and really does show who the real stars are.