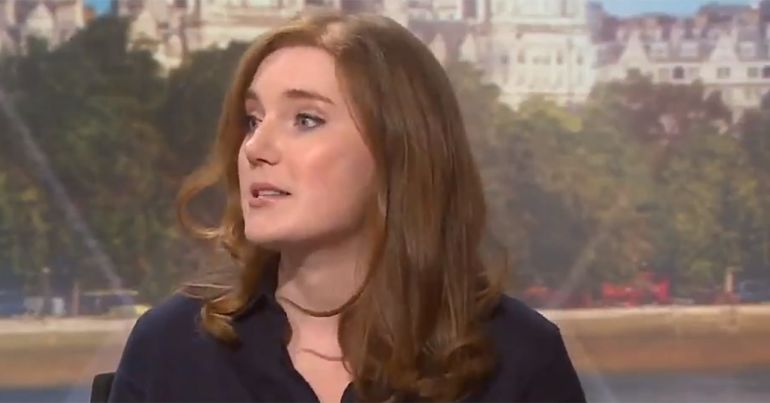 The BBC has billed Ella Whelan, a columnist for the Koch brothers-funded spiked magazine, as a ‘left-leaning journalist’, while she calls for voters to back Nigel Farage’s Brexit party: 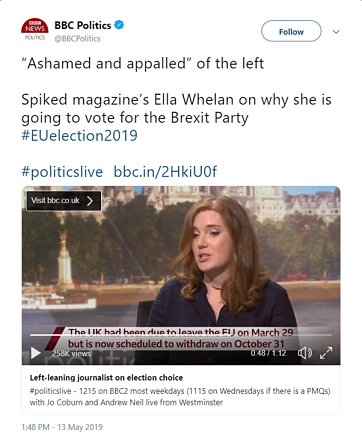 I’m going to vote for the Brexit party and I tell you that was a hard decision for me to make as someone on the left. Because I am ashamed and appalled by the fact that the left has so exited this discussion… eurosceptisim on the left… was a central tenet of left-wing viewpoints.

But the spiked columnist is hardly left-leaning. Whelan is a self-proclaimed ‘anti-feminist’ and has written articles calling for people to stop “obsessing” over sexual assault allegations against Donald Trump.

That didn’t stop the BBC describing Whelan as a “left-leaning journalist” and allowing her to position herself as such during broadcasting.

Charles and David Koch, who have provided hundreds of thousands in funding for spiked, are oil industry billionaires.

The BBC‘s billing of a spiked journalist as “left-leaning” comes against a backdrop where the corporate media marginalises actual progressive voices. Take the sheer number of pro-establishment right-wingers on BBC Sunday Politics. In 19 episodes following the 2017 general election, the BBC brought on pundits well to the right of the political spectrum on every show. By contrast, the public service broadcaster included people on the left only three times during that period. That meant there were 16 episodes without a meaningful leftist viewpoint from any of the three guests.

On social media, people scoffed at the claim Whelan is left-wing:

This is Ella Whelan, a Spiked columnist, who wrote an article for them called ‘Lily Madigan is not a woman’. She isn’t someone ‘on the left’. She’s a fascist. https://t.co/ph38KWqydV… pic.twitter.com/QcfbrlkAh2

The Koch-funded Spiked replaced 'Living Marxism', a title which folded after denying the genocide of Bosnian Muslims, and its leftism should be considered homeopathic (it was once there, traces now undetectable). https://t.co/dXC9JsLvz6

It looks like Whelan is simply billing herself as left wing in order to appeal to that voter base. And the BBC not only left that unchallenged but also described her as ‘left-leaning’. That’s a disservice to viewers.