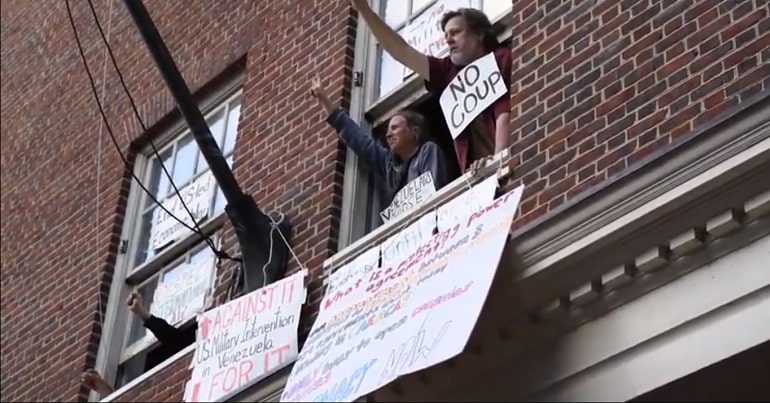 At the request of the elected Venezuelan government, a number of activists have been protecting the Venezuelan embassy in Washington DC from an illegal takeover by the US-backed opposition. On 13 May, however, the struggle for control of the embassy appeared to be coming to an end. Police cleared the embassy’s entrance, and then forcibly entered the building. But in a surprising turn of events, the police left the building shortly afterwards and re-locked the doors – leaving four activists still inside. The situation, however, remains tense.

The Embassy Protection Collective – formed by the likes of CODEPINK, Popular Resistance and ANSWER (Act Now to Stop War and End Racism) – has been inside the embassy for 35 days.

On 13 May (its 34th day of resistance), an unsigned notice was posted on the embassy’s door recognising the self-proclaimed parallel government of Venezuelan coup leader Juan Guaidó. While it acknowledged that the property belonged to Venezuela (and not the US), it argued that embassy protectors should leave because the US backed this coup regime and not Venezuela’s elected government:

This notice recognizing a non-existent government was just posted on the back door of the Venezuelan embassy by federal authorities. Cops are currently clearing out pro-Guaido tent encampments outside and could be entering the building, will update soon. pic.twitter.com/Uv6bD93a6n

Remaining members of the collective then prepared final statements. But they insisted “we are not going to leave voluntarily”:

A final message from the Venezuelan Embassy Protection Collective as police prepare to unlawfully raid the building pic.twitter.com/CL1qLVARlg

After a tense stand-off during the night, four members of the collective managed to resist police pressure to evict them.

Their lawyer, Mara Verheyden-Hilliard, explained that “they were peaceful but they were saying repeatedly that they were… standing up for international law”:

Mara V, lawyer of the #EmbassyProtectionCollective explains what happened today.

The issue here is not about which side people support in the Venezuelan political crisis, as the Independent suggested:

Pro-Maduro activists to be evicted from Venezuela embassy in US after month-long protest.

Instead, the key issue is the observation of international law. Because according to Article 22 of the Vienna Convention:

This is all the more concerning given Washington’s preferred ambassador, Carlos Vecchio, has openly invited US military support to intervene in Venezuela. In any other context, this would certainly be considered treason – i.e. “betraying one’s country, especially by attempting to kill or overthrow the sovereign or government”.

In its attempt to overthrow the Venezuelan government, Washington has consistently violated international law. And as US politician Jill Stein tweeted in relation to the potential seizure of the Venezuelan embassy:

Guaido-Bolton seizure of Ven embassy would violate Vienna Convention & give thumbs up to hostile nations wanting to take over US embassies around the world – like 1979 Iran action the US rails against. Stopping illegal embassy seizure is a win for internatl law, for now.

International law alone, however, won’t stop the US government from illegally taking the Venezuelan embassy (or taking further action against the Venezuelan state). Only the type of sustained direct action like that of the embassy collective can force aggressive governments into concessions.

Indeed, the British state recently planned to violate the Vienna convention. In 2012, foreign minister William Hague threatened to “storm” the Ecuadorian embassy to remove WikiLeaks founder Julian Assange. But as journalist John Pilger reported, “outrage across the world forced the government to back down”.

Pressure can therefore bear results when confronting states that refuse to observe international law. And the embassy protectors in Washington continue to apply that much-needed pressure.