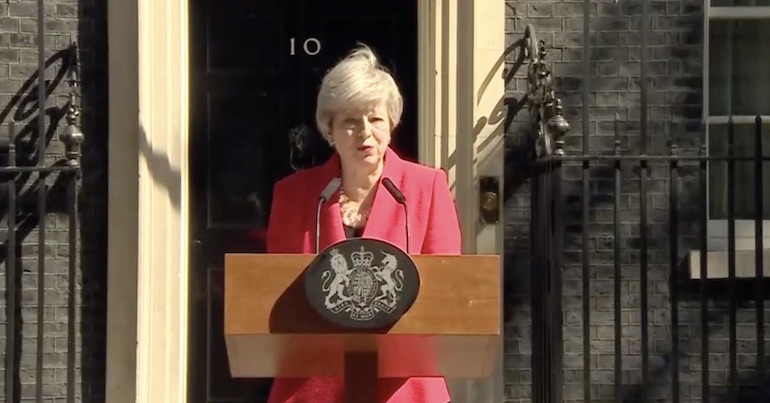 Theresa May has finally announced her resignation. In a statement on 24 May, she told the UK that she’ll step down as leader of the Conservative Party on Friday 7 June. The announcement comes after days, if not months, of speculation over when she’ll leave. But many people found May’s resignation speech “abhorrent”.

The timing of her resignation means that May will still welcome Donald Trump for his state visit on 3 June. In a speech outside Downing Street, May said:

It is, and will always remain, a matter of deep regret that I have not been able to deliver Brexit.

So she’s now the second prime minister forced to resign over Brexit. She went on to insist that the way forward to deliver Brexit could only come “if those on all sides of the debate are willing to compromise”. Although this may refer to Conservative hard-Brexiteers, there was a hint that she also placed some of the blame on Jeremy Corbyn. She seemingly ignored the fact that she faced the largest ever defeat in parliament and failed to get her version of Brexit through three times.

Theresa May is right to resign. She's now accepted what the country's known for months: she can't govern, and nor can her divided and disintegrating party.

Whoever becomes the new Tory leader must let the people decide our country’s future, through an immediate General Election.

May also quoted Nicholas Winton who saved 669 children from Nazis in WW2 by bringing them to the UK. Many people felt this reference was “abhorrent” and “disgraceful” given May’s track record whilst in office:

Fine words @theresa_may but the reality & your legacy is your contribution to austerity and your zeal for a hostile environment. I'm amazed you referenced Nick Winton who saved refugees when your treatment of migrants, refugees and the #Windrush generation has been so abhorrent.

Theresa May evoking Nicholas Winton's incredible legacy – when she utterly failed to protect refugees and is responsible for "Go Home" vans – is pretty disgraceful.

#TheresaMay, who has arguably done more than anyone else to exclude refugees and asylum seekers, particularly children, invoking Nicholas Winton and the Kindertransport is genuinely and deeply offensive to all those she has exacerbated the suffering of with her inhumane policies.

May also mentioned “the tragedy” of the Grenfell Tower fire. She claimed victory for the independent inquiry, that she said was set up:

to search for the truth, so nothing like it can ever happen again, and so the people who lost their lives that night are never forgotten.

Again, many responded with anger:

Shameful for #TheresaMay to use Grenfell in her resignation speech when there are hundreds of people still homeless 2 years after the preventable tragedy.

Although May tried to use her speech to set out what she saw as her ‘achievements’, many people who’ve suffered under Conservative-led austerity and May’s hostile environment spoke out:

There stands #TheresaMay talking about the burning injustices, when will people realise the tories are the cause of these injustices, this inhumane, cold, uncaring woman weeps not for the victims of austerity, but for herself, end this tory shitshow, #GE it's time for #Labour.

Theresa May must go down in history as the worst Prime Minister we’ve ever had. Not only has she completely wasted 3 years with Brexit chaos, but she has entirely neglected everything else and let it collapse. She has governed over the near-destruction of society.

At the end of her speech, May’s voice cracked and she seemed close to tears. But few people responded with any sympathy:

#TheresaMay There will be lots of comments (some sexist) on May's resignation tears. Like others my tears are for those who have suffered/continue to suffer under the Conservative government. Scarily, she believes herself when speaking of 'the country I love'. #NotMyCountry

Although many people were happy to hear that May is finally resigning, it’s unlikely the next Conservative leader will be any better:

So #TheresaMay is resigning on the 7th of June. No need for a celebration though because the prospective candidates for her position are downright awful and shouldn’t even be considered. This is the worst government ever.
A government in name only.

She's only added fuel to the burning injustices she promised to tackle.

And the next Conservative Party leader won't do better.

We need a #GeneralElectionNow & a government for the many.

So June will see the end of May. This will leave the UK with yet another unelected prime minister. So the calls are rising and will continue to rise for a general election and the end of the Tories.