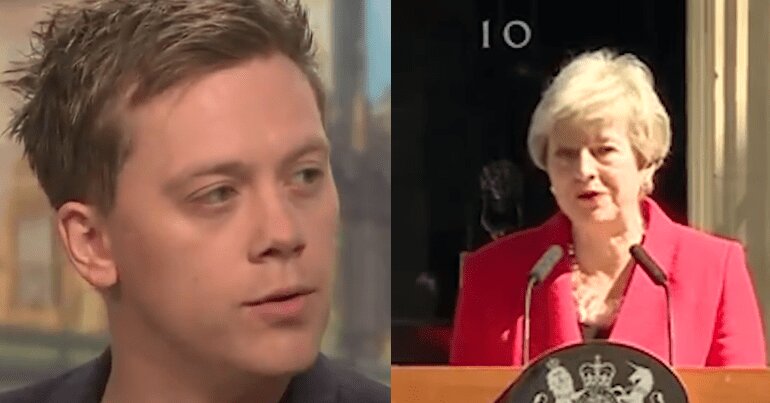 On BBC Politics Live, Owen Jones took apart the ruling class for suggesting we should ‘feel sorry’ for Theresa May.

Jones laid out why he feels “less than no sympathy” for the outgoing prime minister:

“I think of the people she has cruelly treated” Owen Jones on Theresa May standing down #politicslive https://t.co/vbQQtNQPoI pic.twitter.com/H2TtThCv9l

If any sympathy is to be expended today, it should be for the Windrush Britons who, because of her, were kicked out of their homes, denied medical care, deported from their own country. It should be for the children who have been driven into poverty at the fastest rate since 1988. It should be the disabled people having their benefits stripped away. It should be the victims of Universal Credit whose lives have been destroyed. It should be the people driven to foodbanks because of her policies. And I wish we would spend far more time in the media… talking of sympathy; rather than expending it on the powerful who will live affluent and comfortable lives to the day they die, rather than people driven into hardship and insecurity and misery because of their policies

The Guardian columnist also said that this agenda goes further than May:

The only leeway I’ll give her is that she is just one of many architects. This is a team effort by a Conservative Party which over the last decade has plunged Britain into the worst turmoil in peace time. And for that… she and her colleagues will be damned by history.

May will resign on 7 June. During her speech, May’s voice cracked and she verged on tears. One Twitter user quickly went viral with his summary of the spectacle:

THERESA MAY CRIED WHEN SHE LOST HER JOB BUT NOT WHEN 72 PEOPLE BURNED TO DEATH IN GRENFELL. THATS HER LEGACY, CONVERSATION OVER.

As prime minister, May has presided over Grenfell and Windrush. Her Brexit deal suffered the biggest governmental defeat of all time. Before then, she was home secretary under David Cameron’s austerity regime. And as Jones points out, May then continued those crippling spending cuts as prime minister. The fact she hadn’t resigned long ago is a scandal.