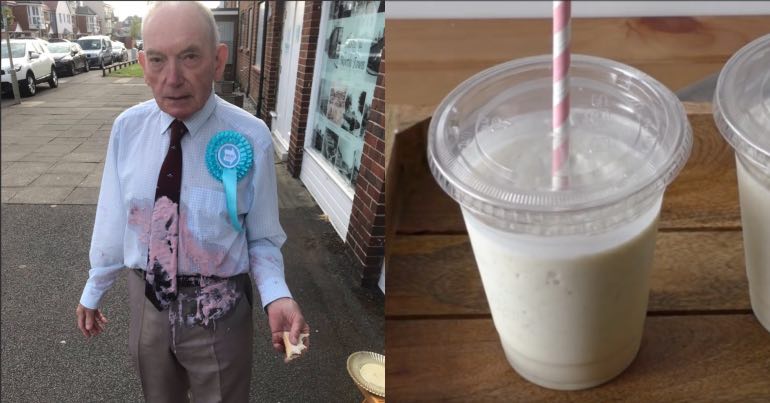 The 2019 European elections will forever be known as ‘the ones where people got milkshakes thrown over them’. And the election’s final day didn’t disappoint, with another Brexit Party activist (allegedly) feeling the cold sting of sweetened dairy.

Social media is awash with conflicting views on the latest incident. For many, it was a simple case of an unjustifiable assault on a political opponent. However, others have gone down a conspiratorial path and suggested the milkshaking was an inside job for election gains.

But the fuss made about this particular incident, including whether or not it was faked, says a lot about the current state of UK politics.

The official version is that an elderly veteran was attacked outside a polling station where he was representing the Brexit Party.

Piers Morgan told the story in his typical ‘angry man of the people’ style:

This elderly gentleman served in the British armed forces for 22 years.
Today he was manning a Brexit Party polling station when he was attacked & had milkshake thrown all over him.
All because he wants the result of a democratic referendum to be honoured.
Disgusting. pic.twitter.com/1vZMHM31M2

Reacting to the story, former footballer Joey Barton suggested that throwing milkshakes is a slippery slope:

And if Barton is right, what comes next? Nukes? One Twitter user had an answer:

Actual footage from outside my polling station pic.twitter.com/3jukgmrUKO

But others are sceptical of the official version of events. Instead, critics suggest it was staged to create sympathy for the Brexit Party. They are part of what is now being called the “milkshake truther” movement:

It's all so well crafted.

Picture posted without any evidence of the actual act. Therefore no idea who, what, where, when whether, nothing re the circs. In my experience, chuckers and egg-splatterers film themselves because they are self-indulgent plonkers. Whiff of Bannon playbook here https://t.co/zFHaiCB4S1

Campbell’s take was particularly interesting considering his own dismissal of conspiracies when questioned about his role in the Iraq war:

One truth seeker even conducted a milkshake “splatter analysis” to test the authenticity of the official milkshake attack theory:

Look at the splatter from a thrown milkshake over Farage, the force from the milkshake flying through the air with high velocity has caused the milkshake to go over Farage from top to bottom pic.twitter.com/d2eAdVIAA0

But others just used the whole situation to take the piss:

This is my father. He was out canvassing for the Brexit Party when a Remainer appeared and threw their milkshake all over him. Please retweet so everyone sees how horrible they can be!!! 😪😪😪 pic.twitter.com/O7COeVmTfA

Did this particular incident distract us from other important issues?

Many believe that the embarrassment of a milkshaking has shattered the far-right’s desire for an image of suited respectability. But some felt that on this occasion, the intense focus on the milkshake drama was counterproductive. And both those expressing sympathy for the man, and those suggesting he staged it, helped distract focus from other serious issues:

Others referred to the damning UN report on poverty in Britain:

Tweeting about this again. It’s sad that on the day after that UN report came out record nos of poverty, both big BBC political programmes spent a good portion of air time discussing how butthurt politicos get by having milkshake thrown on them…this a broken country…

Songwriter and comic Mitch Benn highlighted the scandal of some EU nationals being denied their votes on the very same day:

What’s the betting that precisely fuck all ever gets done about 2 million EU nationals being illegally disenfranchised, but the Old Brexit Guy Fake Milkshake Incident leads to a full public enquiry and multiple arrests?

Others commented on the intense interest and willingness to condemn this act of milkshaking. And yet, they argue, far less energy has been given to matters of life and death involving the far right, and wider issues of political corruption.
Radio presenter, James O’Brien, reminded us of a real neo-Nazi threat:

A neo-Nazi was jailed for life last week after being found guilty of plotting to murder the Labour MP, Rosie Cooper. We seem to have become a country where there would have been more horror & outrage if he'd thrown a milkshake at her.

Others pointed out the selective moral outrage at certain aspects of British politics, while others seem normalised:

But having fascists threatening to take up arms, racists thugs, and guys who publicly laugh about raping MPs standing for political office is fine, is it Damian? #bbcqt #ThrowTheMilkshake

A proven lie plastered on a bus, a fraudulent ‘Breaking Point’ poster, the trashing of electoral law, infecting a democracy with dark money – these are also acts of political vandalism and on a much grander scale than a flung milkshake. So, sure, let’s oppose all of it. Do you?

Milkshakes reveal a lot about our politics

Whether a conspiracy or genuine, the reaction to the latest milkshake incident reveals how messy UK politics has become – in more ways than one. But perhaps more concerning is that while people literally obsess over spilt milk, and rush to condemn the actions of the perpetrators, they are happy to ignore the very real violence of the far-right.

Featured image via Gary/Twitter and One Kitchen – A Thousand Ideas/YouTube.