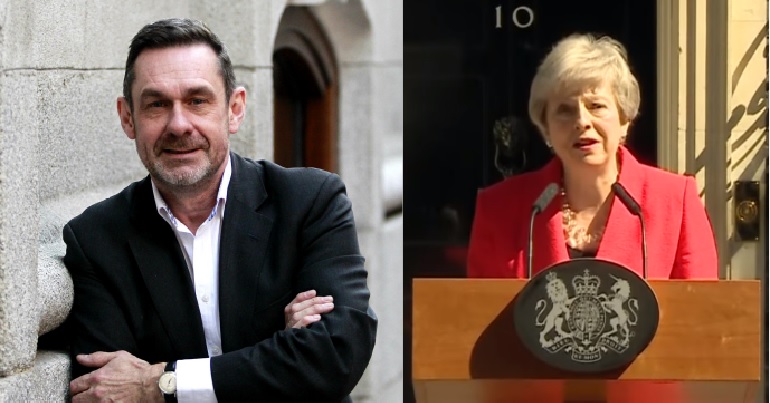 Theresa May finally gave in to the inevitable. In a speech complete with tears and attempts to talk up her time in office, the prime minister announced her departure. She’ll be resigning as leader of the Conservative Party on June 7.

The media has now begun appraising her time as prime minister. One of the many to have weighed in on the discussion is journalist Paul Mason. He didn’t pull any punches.

‘Serving the rich and not the poor’

Appearing on Radio 4’s Any Questions, Mason was among the panel who was asked (2:40) “how will history judge Theresa May’s premiership”. In less than two minutes, he summed up exactly how he thought she should be remembered.

As others have already done, Mason pointed out the hypocrisy of May’s teary exit when viewed in the context of the impact her policies have had on people:

I think it is worth saying, it is good that we see the human in the politicians… who serve us in office. You know, she cracked up at the end. That’s a very human thing to do. But how many people have cracked up in a DWP interview when their benefits have been stopped? If she had been able to see the human in the people she was supposed to be the public servant of, I’d be more sympathetic… for her.

He continued by slamming her government for serving ‘the rich and not the poor’:

It is certain that in every speech she said, including today, she expressed the desire for greater social justice… but the system she serves is one that can’t deliver it. If you’re going to bail out the banks, bail out the giant companies like Carillion that go bust, but then let 20,000 people linked to the steel industry go down the tubes, we know where your priorities are. And I think the priorities of serving the rich and not the poor will be the hallmark of her government, Cameron’s government, and the coalition that came before it.

Mason shifted the focus of May’s time in office away from her bungled handling of Brexit. Obviously that has been disastrous. By not discussing that alone he didn’t let her and her party off the hook for their other policies.

Over a million sanctions were given to disabled benefit claimants between the Conservatives coming to power in 2010 and 2018. A million more children were living in poverty in 2018 than were in 2010. And the number of emergency food supplies distributed by food banks has reached 1.6m according to the latest figures from the Trussell Trust.

This is what May’s time in office must be remembered for. Both her government, and the Conservative-led governments she has served in, have caused untold misery for millions. And no amount of crying over her own departure will cover that up.