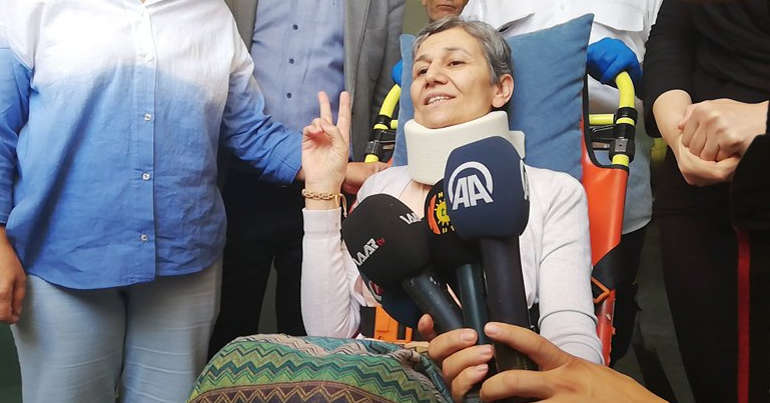 Thousands of Kurdish activists have finally ended their hunger strike. Politicians, political prisoners and activists around the world had been starving themselves to protest the isolation of Kurdish leader Abdullah Öcalan.

Kurdish MP Leyla Güven started the hunger strikes in November 2019, and on 26 May – her 200th day without food – she announced the end of the struggle, stating, “resistance has prevailed”.

In a massive international campaign, solidarity activists around the world have demonstrated, occupied buildings, and contacted politicians and European institutions. In particular, people successfully lobbied the European Committee for the Prevention of Torture (CPT), asking it to take action and visit Öcalan in prison. All of these actions amplified the voices of the hunger strikers, making their demands heard, and putting pressure on Turkey.

Turkey has imprisoned Kurdish leader Abdullah Öcalan for the last twenty years, keeping him in solitary confinement for much of that time, without access to his family or lawyers. The hunger strikers’ demand was been simple: for Turkey to abide by its own law and to lift the isolation.

Turkey finally allowed Öcalan two visits from his lawyers in May. And after months of seemingly ignoring the hunger strikers’ demands, the CPT visited Imralı prison where Öcalan is held. On 16 May, Turkish justice minister Abdulhamit Gül announced that the ban on visits to Öcalan had been lifted.

Öcalan’s lawyers made a statement on the leader’s behalf. They stated:

Öcalan insisted on his call for the termination of hunger strikes and death-fasts, which have achieved their goals… Our client stated that if talks were not held in the future, it could be protested by a political struggle, but actions such as hunger strikes and death-fasts should be avoided. He stated that the main thing is a culture of democratic political struggle and that it is more important for the strikers to be physically, spiritually and mentally healthy.

Of course, there is no guarantee that Turkey will continue to allow Öcalan visits from his lawyers. So it’s vital that people around the world continue to put pressure on Turkey. In her public announcement, Güven said that the isolation of Öcalan means the isolation of all Kurdish people. She continued:

While I promise to act with this responsibility and awareness, today, I end my hunger strike action. I would like to point out that our hunger strike resistance has achieved its goal. But our struggle against isolation and our struggle for social peace will continue in all areas. This struggle must lead to an honourable peace.

Ending the hunger strike does not mean the end of the struggle against isolation. In fact, we will continue to struggle in other forms to ensure isolation is definitively brought to an end.

Scottish Solidarity With Kurdistan emphasised that activists need to keep up the pressure on Turkey:

As we celebrate this victory – at a time when any victory for progressive forces is a rarity – we need to be aware how fragile it is. It can unlock a door to change, but that door will only open if pressure is kept up and increased.

Building on the momentum of the hunger strikes

The hunger strikes have been instrumental in highlighting Turkey’s continuing human rights abuses against the Kurdish people. They have raised public awareness and mobilised people to act. It’s crucial to continue to build on this.

A hunger strike is an action of last resort, only taken when the world refuses to listen, but their message has been made impossible to ignore. We have begun to hear it in our parliaments, in our news media, in our trade unions, in our universities, and on our streets. Today we celebrate the successful action of the most principled, dedicated and unselfish people you could ever meet. Now it’s our turn to act.

Without doubt, this is a massive victory for the hunger strikers and their supporters. But human rights abuses in Turkey continue. And Scottish Solidarity With Kurdistan is right – it’s now time for all of us to act and build on this victory.