Turkey calls itself a democracy. But it's too dangerous for grieving mothers to meet on the streets. - Canary 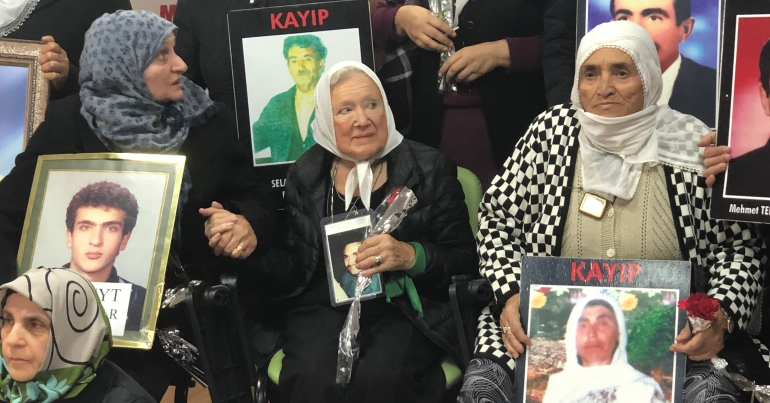 The Saturday Mothers are a group of women who meet every week to remember and demand answers about their children, who were disappeared by the Turkish state. They hold pictures of their missing children and have traditionally gathered in the street to hold vigils.

But women in Istanbul and Amed (Diyarkbakır) are no longer allowed to do this. Their gatherings have been banned by the Turkish authorities. In August 2018, police arrested 47 people, fired tear gas and used water cannons against the mothers in Istanbul. Some of those attacked were in their 80s.

Turkey likes to say it’s a democracy. But its treatment of the Saturday Mothers is yet another example of why president Recep Tayyip Erdoğan‘s government can’t be allowed to get away with this claim.

In Amed, the group meets at the offices of the Human Rights Association. As one person there told me, “it is too dangerous to meet on the streets”.

Armoured police cars wait outside the building. Police officers with cameras film everyone entering and leaving. I’m told that all the footage goes into the files the police hold on people; files that will be used to try and bring yet more terrorism charges against Kurdish people. 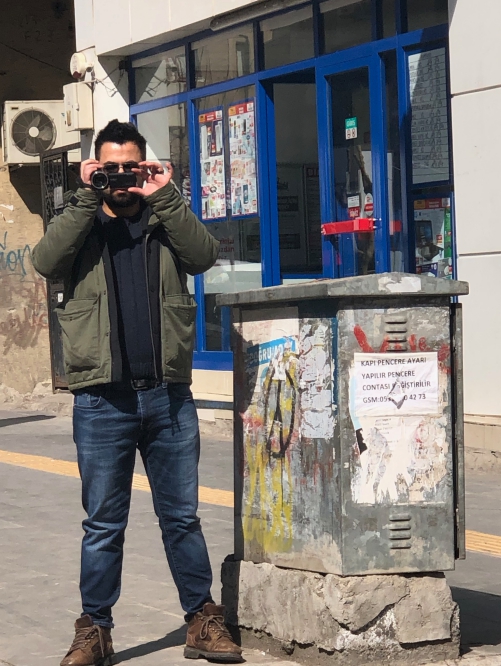 Inside, there’s a big banner on the floor with the names and photographs of those who’ve disappeared. Others hold posters of their loved ones and red carnations. 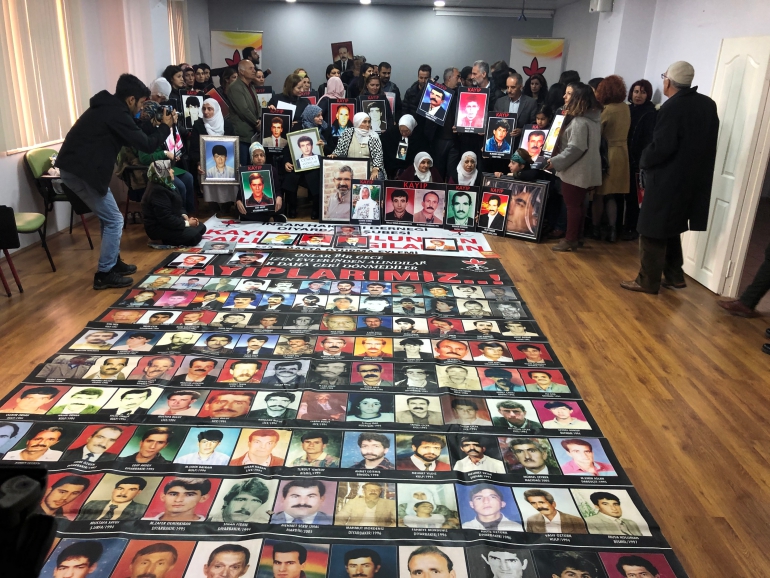 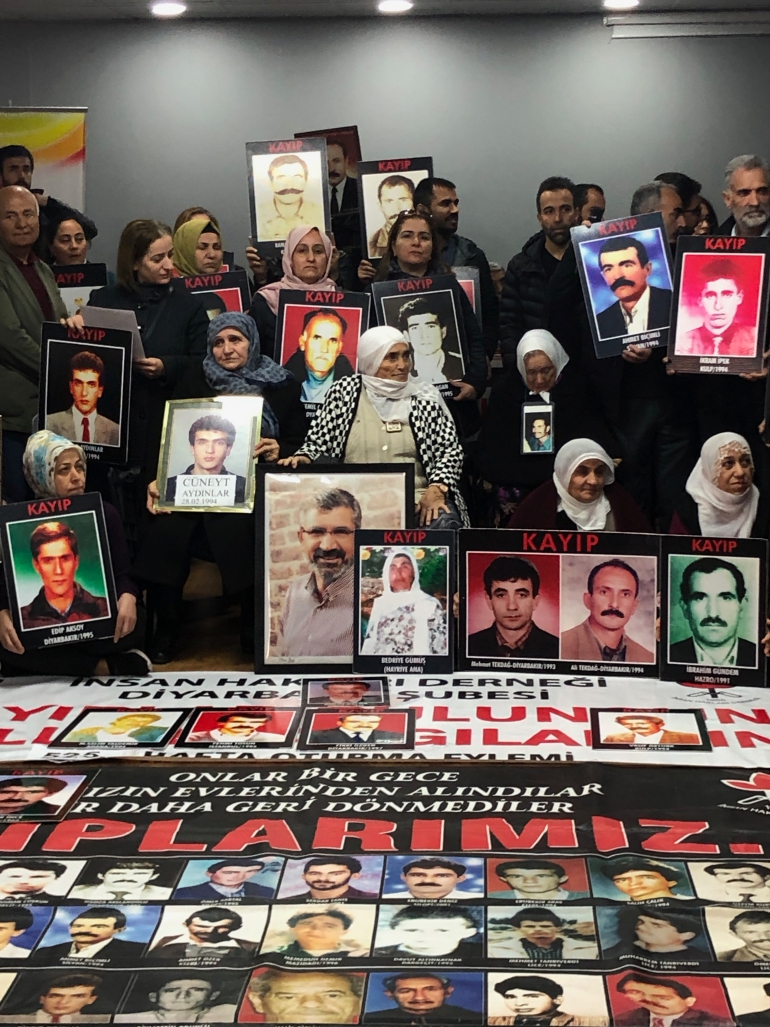 Have a good look at these pictures. Not only because these are the people who were disappeared. But at the relatives of these people; the people who the Turkish state is surveilling; the people it’s banned from meeting on the streets.

The Saturday Mothers’ protests in Turkey have been happening since 1995. The group takes its inspiration from a similar movement in Argentina, Mothers of the Plaza de Mayo. These women remember their children and demand answers over what happened to them when they were disappeared under Argentina’s right-wing dictatorship in the 1970s.

It’s therefore not surprising that 89-year-old Nora Cortiñas, who’d made the 30-hour trip from Argentina in solidarity with Kurdish women, was welcomed so warmly. Cortiñas’s own son, Carlos Gustavo Cortiñas, was ‘disappeared’ in 1977. He was 24. She still doesn’t know what happened to him.

Cortiñas sat in the centre of the room; a photograph of her son around her neck. She told the story of her son. Others spoke of what happened to their children and of their pain. Many people cried.

At the end of the gathering, we sat in silent vigil, remembering those lost; a powerful moment of solidarity and grief.

As this gathering was taking place, Kurdish MP for the HDP (Peoples’ Democratic Party), Leyla Güven was on day 115 of an indefinite hunger strike. And Kurdish lawyers told The Canary that, from 1 March, 5,500 political prisoners are on hunger strike.

Güven started the hunger strikes in November 2018 while in Diyarkbakır prison. She has since been released and is now (12 March) on day 125 of her indefinite hunger strike. She’s in a critical condition.

The hunger strikers are calling for an end to the isolation of imprisoned Kurdish leader Abdullah Öcalan. Öcalan is currently being held in solitary confinement on İmralı prison island where he is not allowed access to lawyers or family visits.

They are not asking for special treatment for Öcalan, but for him to receive the same rights as other prisoners in Turkey; rights that he should already be entitled to under existing Turkish law. They are just asking for Turkey to respect its own legislation.

The western media and western politicians also like to pretend that Turkey is a democracy – in large part because it has NATO’s second-largest army. But it’s time to stop pretending. It’s time to end the charade.

According to Reporters Without Borders, Turkey is “the world’s biggest jailer of media professionals“. The Permanent Peoples’ Tribunal (PPT) found Erdoğan and the Turkish state guilty of war crimes, as well as crimes against humanity, against the Kurdish people. Protests such as this one are banned.

Just days ago, the International Women’s Day march in Istanbul was brutally attacked by police. This is not what a democracy looks like.

Meanwhile, the UK continues arming Erdoğan. Since 2016, the UK has sold Turkey over $1bn worth of weapons. In May 2017, Theresa May and BAE Systems sealed a £100m contract to help Turkey develop fighter jets and improve trade relations. And Rolls Royce partnered with Turkish firm Kale in 2017 to build the engines for its fighter jets.

It’s down to all of us to show what’s going on in Turkey. Whether it’s writing to your MP, telling people about the hunger strike, boycotting Turkish products, or shutting down an arms company that is making money from selling Turkey weapons, there’s something we can all do to expose what’s really happening.

Featured image and all other images author’s own