'Our future depends on your solidarity.' A message from prisoners' families in Turkey to people in the UK. - Canary 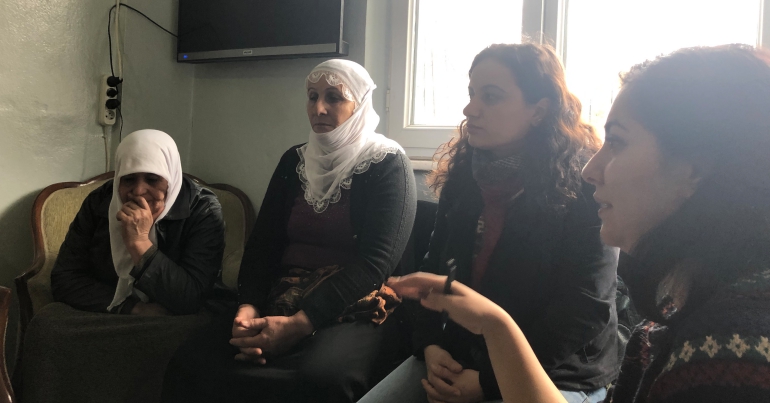 On 3 March, The Canary met the Solidarity Association with Families of Prisoners and Convicts (TUAY-DER) in Amed (Diyarkbakır), Turkey. According to the association, there are 15,000 political prisoners in the country. And Kurdish lawyers told The Canary that, from 1 March, 5,500 prisoners are on hunger strike.

The association gave a clear message to people in the UK. They know Turkish president Recep Tayyip Erdoğan will not listen to them; but they do think he’ll listen to pressure from European governments. So it’s down to all of us to put pressure on our government and draw attention to what’s happening in Turkey. Because as one member of the association put it:

Our future depends on your solidarity.

Kurdish MP Leyla Güven started the hunger strikes in November 2018 while in Diyarkbakır prison. She has since been released and is now (6 March) on day 119 of her indefinite hunger strike. She’s in critical condition.

The hunger strikers are calling for an end to the isolation of imprisoned Kurdish leader Abdullah Öcalan. Öcalan is currently being held solitary confinement on İmralı prison island where he is not allowed access to lawyers or family visits.

They are not asking for special treatment for Öcalan, but for him to receive the same rights as other prisoners in Turkey; rights that he should already be entitled to under existing Turkish law. They are just asking for Turkey to respect its own legislation.

Families spoke of their pain. One woman said she had three children, all in different prisons across Turkey. Some who had children in prison also had other children whom the Turkish state had killed.

They also spoke of the conditions their children were being held in; conditions that have deteriorated since starting the hunger strike. Those on hunger strike are being punished. Punishments include being moved to prisons further away from families, cell confinement, being denied access to visits and phone calls, and being refused access to newspapers.

One woman who had spoken to her son said she didn’t know how he really was; he always claims he’s fine but she can tell he can’t talk freely and that there are guards listening in.

One association member said the Turkish government has shut the organisation down five times since it began in the 1990s; the state claims Turkey is a democratic country and therefore such an association is not needed.

One man spoke about the complicity of European countries (via the arms trade) in this suffering, saying:

All European countries are responsible if people die. Because we know that the Turkish state buys guns and bombs from European countires. So it’s a very important point for us if we can stop Turkey from buying bombs. If you don’t sell this equipment, we know our country will be very weak.

And there was a plea to people in the UK to stop the arms trade:

If you want to do something, you can can stop it, if it is possible. It is a very important point.

Since 2016, the UK has sold Turkey over $1bn worth of weapons. In May 2017, Theresa May and BAE Systems sealed a £100m contract to help Turkey develop fighter jets and improve trade relations. And Rolls Royce partnered with Turkish firm Kale in 2017 to build the engines for its fighter jets.

Theresa May and those stupid Conservatives… after Brexit they just want to improve their bilateral relations with Turkey at a time when Turkey is having so many problems with [the] European Union so they think it’s an opportunity to sell Turkey weapons.

Özsoy continued by saying that the Conservatives:

It’s down to us

This “business as usual” is continuing despite the hunger strikes and the Permanent Peoples’ Tribunal (PPT) finding Erdoğan and the Turkish state guilty of war crimes, as well as crimes against humanity, against the Kurdish people.

The hunger strikes will not end without deaths unless action is taken. Kurdish people feel there is a lot we can do in the UK to support them. It may not feel like our government will listen, but we have to try.

Please get involved; whether it’s writing to your MP, telling people about the hunger strike, boycotting Turkish products, or shutting down an arms company that is making money from selling Turkey weapons. There is something each and every one of us can do to make sure the hunger strike is successful, and that these families do not end up grieving for their children.