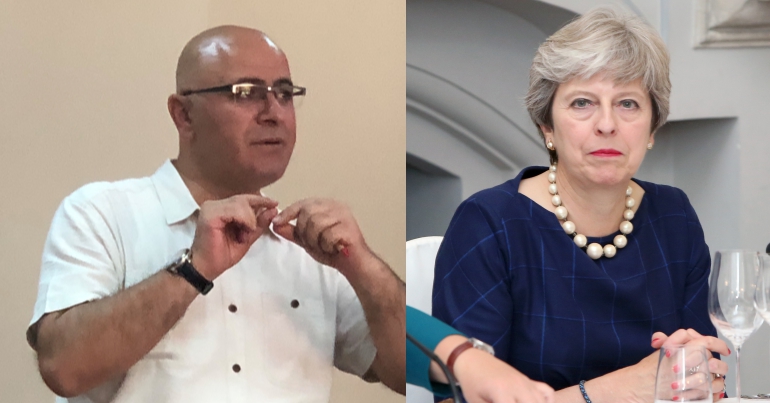 In May 2018, Theresa May welcomed Turkish president Recep Tayyip Erdoğan to the UK. She was accused of “racism” by Kurdish groups after a joint press conference she held with Erdoğan. In the conference, she stated:

It is important that in defense of democracy, which has been facing extraordinary pressures from the failed coup, instability across the border from Syria and from Kurdish terrorism, Turkey does not lose sight of the values it is seeking to defend.

But on the eve of what is widely considered the most important election in modern Turkish history, one Kurdish MP, Hişyar Özsoy spoke 12 words that should make May hang her head in shame. In response to a question from The Canary, Özsoy said:

UK is the most terrible, horrible country for us on the planet.

Özsoy, deputy chair for foreign affairs of the left-wing and pro-Kurdish Peoples’ Democratic Party (HDP) was clear about what he believed the UK government’s motivations to be:

The UK government recently said of its arms sales to Turkey:

This “business as usual” is continuing despite the Permanent Peoples’ Tribunal (PPT) finding Erdoğan and the Turkish state guilty of war crimes, as well as crimes against humanity, against the Kurdish people. The tribunal heard evidence of atrocities committed by the state between 1 June 2015 and 31 December 2017, including:

Speaking about solidarity from the UK, Özsoy said that while Jeremy Corbyn has long supported the Kurds, there is more he could do:

So Theresa May invites Erdoğan, Corbyn could have come to Turkey and say hi to the HDP, I’m here. It’s not a crime or anything. These are gestures that people are not alone here. They feel suffocated. They feel isolated.

It is therefore down to all of us who live in the UK to stand up to what our government is doing: to act in solidarity with people feeling “isolated” and “suffocated”. If the UK is regarded as the “most terrible, horrible country on the planet” for Kurdish people then we all must shout from the streets and the rooftops: this is not in my name.

Featured image via author’s own and Wikimedia/Annika Haas