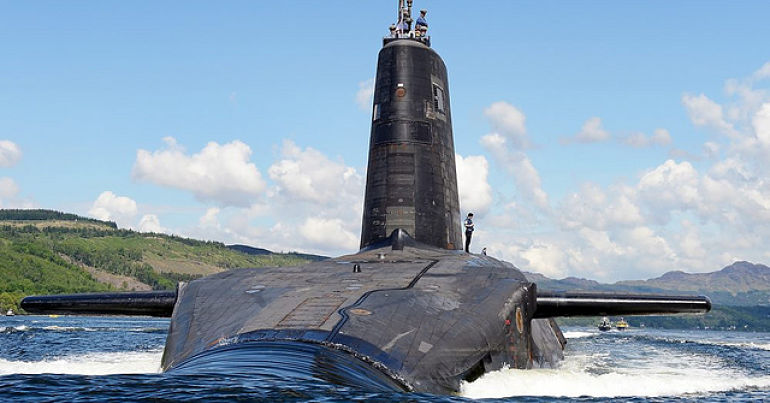 A former nuclear submarine commander is pleading with the government to scrap the trident nuclear missile programme. He said that getting rid of the subs from the river Clyde in Scotland would send a strong message at a time when humanity could tip “over the edge into a nuclear annihilation abyss”.

As the Sunday Herald reported:

Rob Forsyth, who commanded nuclear-armed and nuclear-powered submarines in the 1970s for the Royal Navy, now thinks that Westminster’s case for keeping Trident on the Clyde is practically, legally and morally indefensible.

Theresa May has previously suggested that anti-Trident MPs are “the first to defend the country’s enemies”. But Forsyth told the Sunday Herald:

This patriot – who has served at the coal face of the at-sea deterrent – is merely asking the UK’s leaders to start thinking hard about the nation’s strategic choices and introduce some bold moves. The UK would be showing true global leadership at a time when the whole of humanity could so easily topple over the edge into a nuclear annihilation abyss.

Speaking to the Sunday Herald, Forsyth also admitted concerns about the current government’s approach to the use of trident. He stated:

Trident is no longer a weapon of last resort to be used in extreme circumstances such as defence of the homeland. Present policy includes potential first use against rogue states if they ever used chemical or biological weapons against troops in the field. The general public are not aware of this.

there is no threat that justifies such an aggressive posture at present.

And he called on the government to:

trade in our nuclear weapons as our contribution to multilateral disarmament.

Responding to Forsyth’s claims, the Ministry of Defence stated:

Our nuclear deterrent is fully compliant and compatible with our international treaty and legal obligations. The use of nuclear weapons – like all weapons – would be subject to the requirements of international humanitarian law.

Forsyth is not alone in his opinion that trident is an outdated and unnecessary policy. On 20 June, 60 activists chained themselves to the railings outside parliament. They were calling on the government to sign the Treaty on the Prohibition of Nuclear Weapons.

Rob Forsyth is one of a growing number of former generals and commanders of the UK’s nuclear arsenal who are calling for an end to Trident and CASD as they are inherently dangerous, wasteful of huge sums of public money and completely useless in military terms.

The government shows no sign of relenting to these demands. In fact, defence secretary Gavin Williamson is calling on May to approve an extra £20bn in annual defence funding to match the proposed NHS increase.

The shadow defence secretary Nia Griffith has also stated that Labour supports having a nuclear deterrent. Speaking on The Andrew Marr Show, she said:

The struggle goes on.