Boris Johnson promised to 'lie in front of the bulldozers' at Heathrow. So where is he today? - Canary 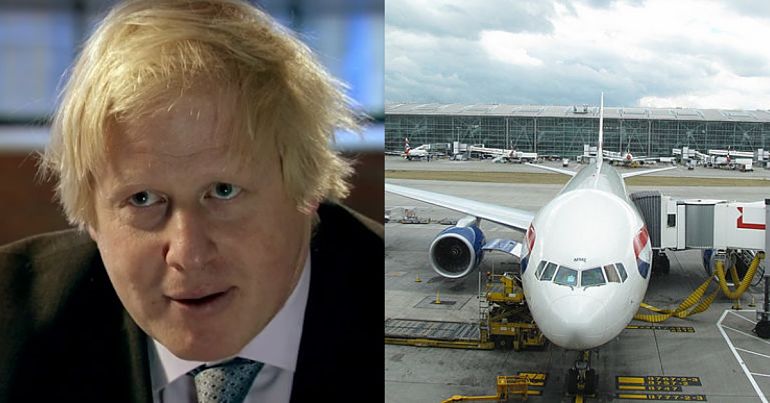 On 25 June, MPs will vote on whether to expand Heathrow Airport by building a third runway.

At this crucial time, it’s important to remember that, back in 2015, foreign secretary Boris Johnson made a bold and impressive pledge:

Yet today, he’s mysteriously absent*. So people are asking where the hell he could have got to?

Even high-ranking ministers don’t have the foggiest:

Chris Grayling on R4 this morning:

‘I have absolutely no idea where Boris Johnson is.’

He is the Foreign Secretary. he promised to lay down in front of a bulldozer if Heathrow ext went ahead.

Although there are also reports he’s hiding in plain sight:

While there is a chance that Johnson could be away on important official business, the government is imposing a three-line whip on Conservative MPs to vote in favour of expansion.

Therefore, if Johnson were to stick to his principles, he would almost certainly have to follow international trade minister Greg Hands in resigning from the front bench:

Greg Hands has resigned because he opposes the expansion of Heathrow Airport, fair enough, Boris Johnson also opposes it, but the spineless bastard won't resign, instead he's rather conveniently going to be out of the country during Monday's vote, fucking tory coward #ToriesOut

This seemingly convenient absence has led some to question Johnson’s motives:

The man who vowed to lie in front of #Heathrow's bulldozers, but can't even find the courage of his own convictions. to vote in the Commons? Yes, Brexit's own high priest of hypocrisy, his own pyramid of piffle, the invertebrate Boris Johnson.

Even Conservative MP Justine Greening has been getting in on the act:

Great you’re back Greg! I wouldn’t want any long term MP campaigners against #Heathrow expansion to miss their chance to represent their community. #commitment #bulldozer https://t.co/FP5h4lqrAg

Although some gave him the benefit of the doubt. Sort of:

Boris Johnson:
"I’ll lie down in front of the bulldozers to stop Heathrow expansion”
*flies out of the country*
“I didn’t say where the bulldozers would be"

Some see Johnson’s vanishing act as a new form of ironic protest:

In order to protest against the 3rd runway at Heathrow, Boris Johnson has flown out of the country.

People are asking where BORIS Johnson is……. he is flat out in a Field near Heathrow Airport waiting for a Bulldozer. #Heathrow

Yet others weren’t so forgiving:

So… Boris Johnson promised to ‘lie down in front of the bulldozers’ to prevent Heathrow’s 3rd runway. Today he’s conveniently out of the country. At least ‘lie’ was accurate 😡

It’s strange that Boris Johnson isn’t going to be lying in front of the bulldozers at Heathrow, given how frequently he lies about everything else.

Calls for his resignation are growing:

If Boris Johnson has a backbone, or a shred of credibility left, he will join Greg Hands in resigning. #Heathrow https://t.co/zcOUInt2fE

Yet as Johnson seems to have gone AWOL precisely to avoid resigning, some are saying:

BORIS JOHNSON is out of the country to avoid voting on Heathrow expansion against which he vowed to lie down in front of the bulldozers.A principled politician rather than break his election promise would leave the Government in such a situation. Boris Johnson does a bunk

Resigning now would be like a child faking illness then declaring themselves better just in time for triple maths.

Theresa May has bizarrely defended Johnson’s decision to be absent as he is:

the living embodiment of global Britain.

That must mean that either:

If May had any authority, given everything that Boris Johnson has done so far she would sack him for this disappearing act. This is absolute parody leadership.

Either way, Johnson’s decision to take flight rather than stick to his guns is at least consistent with a career defined by turbulent principles.

* Shortly before publication, Johnson turned up in Afghanistan.