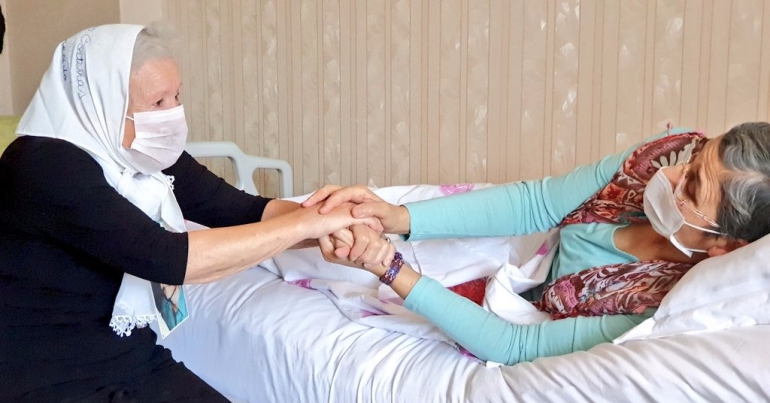 Occasionally, there are days that are so powerful you know they’ll stick with you forever. These are the days that make writing hard; they make it difficult to know what words to choose to convey an experience.

On 1 March, I met Leyla Güven at her home in Amed (Diyarkbakır), Turkey, on day 114 of an indefinite hunger strike calling for an end to Kurdish leader Abdullah Öcalan’s solitary confinement and to allow him access to lawyers and family visits. Güven is a Kurdish MP for the HDP (Peoples’ Democratic Party). She started her hunger strike whilst in prison and has continued since her release on 25 January.

There are now over 5,000 hunger strikers. They’re not asking for special treatment for Öcalan. They want to break his isolation. They want peace. And while Öcalan is held in conditions where he has no access to lawyers, to his family, to visits, there will not be peace. So the hunger strikers see their demands for Öcalan as a demand for peace. They want Öcalan to have the same rights as other prisoners in Turkey; rights that he should already be entitled to under existing Turkish law. They’re just asking for Turkey to respect its own legislation.

I knew meeting Güven would be a moving experience. But I had the privilege of doing so alongside 89-year-old Nora Cortiñas. Cortiñas made the 30-hour trip from Argentina because she wanted to show solidarity with Güven and Kurdish women. Cortiñas’s own son, Carlos Gustavo Cortiñas, was ‘disappeared’ in 1977 under Argentina’s right-wing dictatorship. He was 24. She still doesn’t know what happened to him.

Who are the Turkish police ‘protecting’?

Police guard the entrance to the car park outside Leyla’s apartment block. We drive past armoured cars to park. We’re told it’s for security – but whose security is unknown. It’s certainly not for Leyla’s benefit or that of the people who visit her. And a woman who can barely move from her bed on hunger strike can hardly be a security threat.

We’re warmly invited into Leyla’s immaculate flat by her daughter. The TV’s on, with the sound down. Iman Sis – a Kurdish activist in Wales – is on the news. Sis was on day 74 of his hunger strike.

Paper masks are handed out. Nora puts on her headscarf with the details of her son’s disappearance embroidered onto the white cotton. She wears a photo of her son round her neck. Nora wants to know if she can touch and embrace Leyla. But she’s told we can’t due to the fragile state of her health.

This ‘no touching’ protocol evaporates within moments of us entering Leyla’s room. She’s lying on her bed. But as soon as Nora enters, Leyla stretches out her hands. No health restrictions can stop the connection between these two mothers.

I stand at the end of her bed. The other woman, Beverly, who has also come from Argentina, stands behind Nora. She translates Nora’s Spanish into English. Our Turkish interpreter then relays her message of solidarity to Leyla.

I feel the emotion in my heart. It is the same struggle. It is very important for us.

“Dialogue on their lips and peace in their hearts”

Nora asks if she can read Leyla a poem. It is written by Alejandro Haddad, an Argentinian man who spent time in Kurdistan in 2011 making a documentary about the struggles of Kurdish and Argentinian mothers. It is in a book of poems about Kurdish women. Leyla recognises the picture on the front of the cover. It was drawn by a friend of hers; someone whom she’d spent time with in Diyarkbakır prison.

The poem insists that:

they do away with the flowers,

they cover the sky with smoke

and unravel the human landscape…

That is why [women] break through the military siege with

dialogue on their lips and

peace in their hearts.

The power of mothers

Leyla tells us how tired she is. And she says how important Nora’s visit is; that it’s important for all women and all mothers. She also speaks of the power of Nora’s presence, saying:

Nora tells her how proud she is of Leyla as a woman, as an activist.

Leyla gives us all traditional Kurdish scarves, and I think it might be one of the most precious things anyone has ever given me. She ties Nora’s around her neck.

A message to the UK

I ask Leyla what message she would like to send people in the UK. She tells me how important it is that I’ve come to her house as a journalist; that journalists aren’t interested in the hunger strikes.

Her voice is both fragile yet incredibly strong as she sets out the demands of the hunger strike. She speaks about Öcalan and explains that what the hunger strikers are demanding are just basic human rights. She stresses that the isolation needs to end. And she says:

“I will continue to struggle”

Leyla is getting tired. She reaches out to me and Beverly, drawing us close too, and I hold her hand despite the earlier instructions on not touching.

As we leave, Leyla’s final words to us resonate:

I will continue to struggle.

I will not cry

I hold back my tears. Because I am a witness. And these mothers are the ones truly struggling; the ones who have lost and the ones who have fought. My would-be tears are tears of empathy. But I feel I have no right to them.

Leyla is now on day 118 of her hunger strike. Sis is on day 78. According to Kurdish lawyers, as of 1 March, 5,500 political prisoners are on hunger strike. This is urgent. This will not end without deaths unless action is taken. Kurdish people feel there is a lot we can do in the UK to support them. For one, we can put pressure on our government, which has stood by Turkey even after it was found guilty of anti-Kurdish war crimes. It may not feel like our government will listen, but we have to try.

I don’t want those tears to be tears of grief.

Please get involved; whether it’s writing to your MP, telling people about the hunger strike, boycotting Turkish products, or shutting down an arms company that is making money from selling Turkey weapons. There is something each and every one of us can do to make sure the hunger strike is successful and it doesn’t end in tragedy.

Writing this, I try to hold back the tears. I’m unsuccessful, though. As the words come, the tears flow. But I know that it’s action that’s needed, not sadness.