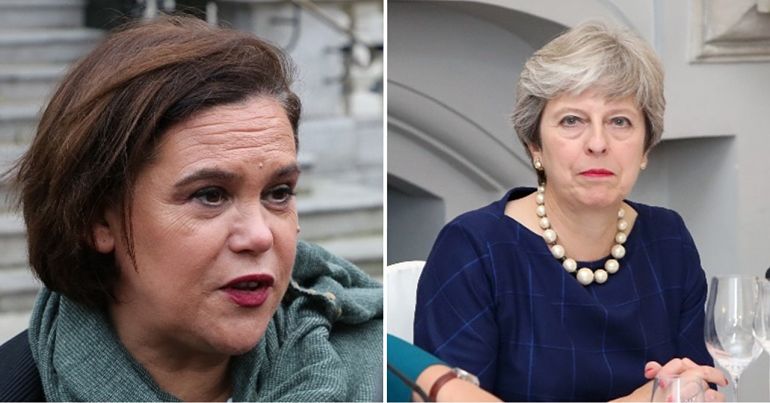 28 comments
Support us and go ad-free

The leader of Sinn Féin has said a hard Brexit means a united Ireland is now more likely. Mary Lou McDonald made the comments while appearing on CNN. She said Theresa May, encouraged by “hard-line Brexiteers”, chose a “high wire strategy”. This hasn’t worked out for May, though. And now, given the chances of a hard Brexit, McDonald believes Irish reunification is possible.

In the interview, McDonald said Brexit “has been a very long drawn-out process”. In her view, the Tories have shown “recklessness”. May, she said:

Hope[d] that somebody somewhere might blink and that they might get some leverage but that hasn’t happened.

And now a hard Brexit is possible because of this stubbornness:

I have always feared that that could happen, as much by accident as by design.

The future of Ireland

The issue of putting the question of the border on our island to the democratic will of the people will be unanswerable.

A referendum on Irish unity will I think be absolutely essential in the event of a crash out.

Given the effects of a hard Brexit on Ireland, she is calling for a referendum:

If for no other reason but to protect our economic and national interests.

Speaking Live from New York this evening on @cnni, Sinn Féin President @MaryLouMcDonald has said that a referendum on Irish Unity is inevitable in the event of a no-deal Brexit.#Time4Unity #BrexitVote #Tá32 pic.twitter.com/RIAWCj5Zsb

The Northern Secretary can decide to call a border poll on Irish reunification at any time. And recently, calls for Irish unity have increased. One example is the emergence of Trade Unionists for a New and United Ireland (TUNUI). It held its launch in Dublin on 25 February. It calls for “trade unionists across Ireland to begin engaging in the debate for Irish unity”.

The future of Brexit

McDonald had earlier also said that the Tories showed a “disregard” for Ireland. This, she argued, “is at the heart of the Tory Brexit agenda”. And now, because of the chances of a hard Brexit, it is “imperative to ensure no return to a hard border”.

But a hard Brexit seems to be a real possibility. The Democratic Unionist Party (DUP) voted against May’s new deal. DUP deputy leader Nigel Dodds has also said the threat of a hard Brexit should be kept as a bargaining tool. He said:

Once you take that threat off you are bound to be offered terms which are less advantageous in the sure and certain knowledge that the other side have that you’re not going to walk away.

MPs are due to vote on leaving the EU without a deal. If they vote no to this, they will then vote on whether to extend Article 50. The deadline for Brexit is currently 29 March.