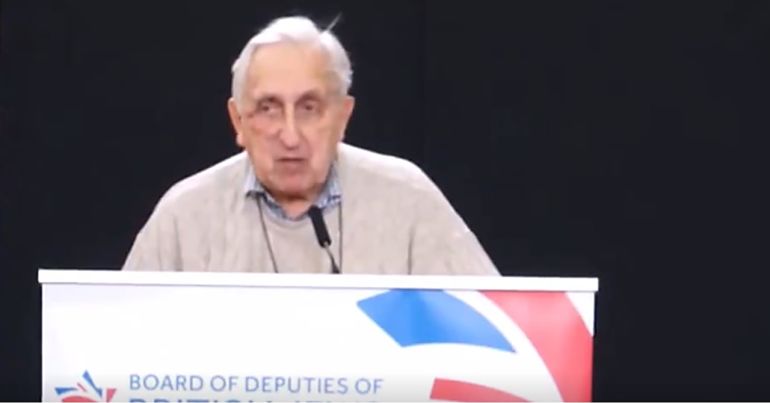 A former president of the Board of Deputies of British Jews (BoD) has called for Jeremy Corbyn to be ‘sacrificed’.

Speaking at the BoD meeting on 19 May, Lionel Kopelowitz said:

The word Corbyn is a very suitable one for him, after Corbyn in Hebrew is ‘korban’, which is a sacrifice. And I think we should sacrifice him for all the trouble that he has caused.

“Could incite hate against Jeremy Corbyn”

It is as if in some circles there is an open season for, even an almost gleeful enjoyment in, using threatening language that could incite hate against Jeremy Corbyn. At the extreme it could be dangerous: one thinks for example of the horrific murder of Jo Cox.

JVL will pass this on to the Leader’s office making the point that they may want to consider reporting the incident to the police.

Here is the former president of the Board of Deputies publicly calling for people to "sacrifice" Jeremy Corbyn "for the trouble that he has caused" pic.twitter.com/Ud8mGLmb7d

This speech by Lionel Kopelowitz is abhorrent and quite inappropriate for a Senior Past President of the BOD. The current President Marie Van Der Zyl thought it necessary to remind those present that the Board’s session was being live-streamed (she was clearly concerned about his intemperate comments). But neither she nor any other of the approaching 100 Deputies present apparently saw fit to distance themselves from these remarks. Nor did Mark Regev, Israeli Ambassador who was present and a member of the platform party.

Speaking to The Canary, the Emeritus Professor of Operational Research at the London School of Economics, Jonathan Rosenhead, added:

Human sacrifice is defined as ‘the act of killing one or more humans, usually as an offering to a deity, as part of a ritual.’ What sort of god does the BoD’s Senior Past President wish to appease?

The Canary contacted the Board of Deputies, but had received no response at the time of publication.