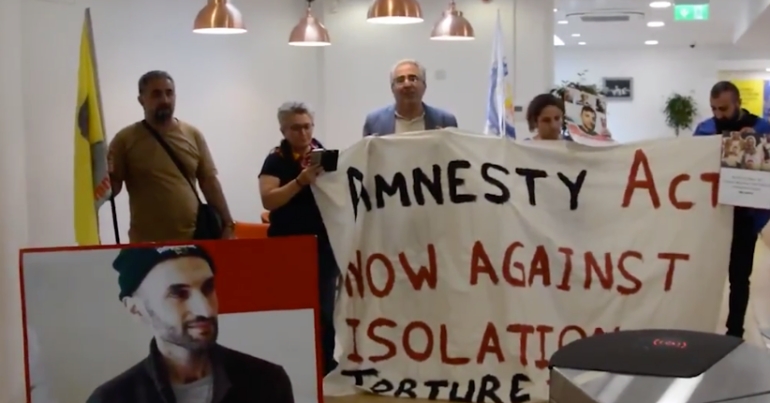 The UK offices of both Amnesty International and ITV have been occupied to protest the organisations’ silence over the prison conditions of Kurdish leader Abdullah Öcalan.

Thousands of people, many of whom are political prisoners in Turkey, are on indefinite hunger strike demanding the end of the isolation imposed on Öcalan. The Kurdish leader is currently being held in solitary confinement on İmralı prison island, where he is not allowed access to lawyers or family visits. His writings have been central to the progressive Rojava Revolution in northern Syria, which has put ecology and women’s liberation at the forefront of its struggle for communal democracy.

The act of civil disobedience since morning in the Amnesty International building in London to protest the isolation of Kurdish people's leader Abdullah Ocalan has turned into a hunger strike. pic.twitter.com/aZIKuznOOW

And they soon started a hunger strike in the building:

At this moment activists occupied @amnesty in #London and started a #HungerStrike!
Break the silence, #BreakTheIsolation and #SmashFascism!#LeylaGüven is not alone! 7000 hunger strikers in the prisons, in #Turkey, #Kurdistan, #Europe and #Canada are not alone! pic.twitter.com/xn7lBj5k7w

The protesters want Amnesty to speak out more clearly about what is happening in Turkey:

Kurdish & Turkish socialists at @AmnestyUK HQ in London who refuse to leave until Amnesty take up the case of torture in Turkish prisons which so far they are ignoring, despite evidence. They even denied evidence of the hunger strike – here is Leyla Güven visited by Leila Khaled! pic.twitter.com/sy667vsT7J

By the evening, people announced they were staying the night and that Amnesty had agreed to meet them in the morning:

Amnesty International staff have just left many activists who occupied their offices today, to stay the night in their building. Amnesty staff left telling them were the toilets were etc and said 'See you in the morning.' Kurdish activists want @AmnestyUK to help #EndIsolation

The group of protesters stated:

Meanwhile, other people occupied the offices of ITV:

BREAKING: KURDS AND FRIENDS ARE NOW OCCUPYING ITV OFFICES IN LONDON. IF YOU ARE LOCAL PLEASE TRY TO VISIT EITHER OF THE SITES BEING OCCUPIED. pic.twitter.com/OnALhjzWot

The silence on Öcalan and the Kurdish hunger strikers must end. And Öcalan’s isolation must stop. The hunger strikers aren’t asking for special treatment for Öcalan. They want him to receive the same rights as other prisoners in Turkey; rights that he should already be entitled to under existing Turkish law. They are just asking for Turkey to respect its own legislation.

Amnesty urgently needs to speak out about Öcalan and the anti-Kurdish war crimes committed by the Turkish state in recent years. And we all need to raise our voices to support the hunger strikers’ demands.