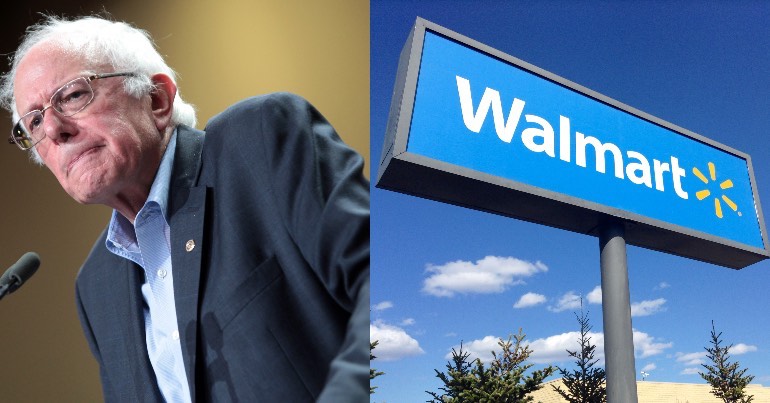 Presidential hopeful Bernie Sanders has taken on corporate giant Walmart, in the middle of a shareholders’ meeting. He accused it of paying its employees “starvation wages” which are so low that workers have to rely on welfare to survive.

Walmart is reportedly the world’s biggest company. For many years, it has also ranked regularly as the largest in the US. And critics accuse it of avoiding billions of dollars in tax.

At the meeting, Sanders pointed out that Walmart’s owners, the Walton family, is “the wealthiest family in the United States”. He revealed that the family is worth $175bn. Yet he argued that the company pays its employees very little. In fact, he asserted that it pays many of them “starvation wages” which are:

so low that many of these employees are forced to rely on government programmes like food stamps, Medicaid, and public housing in order to survive.

Sanders went further though. He asserted that:

the American people are sick and tired of subsidising the greed of some of the largest and most profitable corporations in this country.

He also stated that people are “outraged by the grotesque level of income and wealth inequality” in the US. Using Walmart as an example of this inequality, he revealed that its CEO makes “a thousand times more than the average Walmart employee”.

Last year, Walmart made nearly $10bn dollars in profit. It paid its CEO over $20m in compensation. And it has authorised $20bn in stock buy-backs which will benefit its wealthiest stockholders.

Given this, he maintained that Walmart paying its workers “a living wage” of at least $15 per hour is very doable. He also stressed that it’s “not a radical idea”. He therefore called on Walmart to:

strike a blow against corporate greed and a grotesque level of income and wealth inequality that exists in our country.

Sanders also shared the experiences of a Walmart worker. She explained that, at one stage, she couldn’t afford her rent or food:

There is no justice when the owners of Walmart are worth $175 billion while their employees are unable to afford rent or put food on the table. @forrespect pic.twitter.com/45NPn9F9oY

Sanders spoke to other Walmart employees too, who recognised that he was there to help them:

A company owned by the richest family in America shouldn't have workers living in poverty.

That is why I went directly to @Walmart's owners to demand they pay a living wage. We will not stop fighting until that is a reality for every worker in America. @forrespect pic.twitter.com/leEQoExRl0

Many people praised Sanders for standing alongside Walmart workers:

Name another US presidential candidate on either side of the aisle that has stood beside employees at a stockholder meeting like this. You can’t because it hasn’t happened. This is the literal definition of speaking truth to power #Bernie @Walmart pic.twitter.com/GZhVyV3zeR

This man is too good. There aren’t many elected officials that are as compassionate as he is. ♥️ #BernieAtWalmart https://t.co/pLDachcDsI

One of the issues facing many US citizens these days is their lack of access to healthcare. It’s been reported that half of them “delay getting the care they need or put it off completely”. This is because they simply can’t afford it. Not helping matters is that Walmart is the largest private employer in the US and pays most of its workers very little. When you add this to the countless others who work in even lower paying jobs, is it any surprise that many people can’t afford healthcare?

Congresswoman Alexandria Ocasio-Cortez is now also challenging the terrible pay that many people earn in the US. So perhaps change is on its way. And maybe one day soon workers won’t have to decide between paying rent or going to the doctor.

But the fact that millions of Americans do have to ask themselves this question every day means that change has to happen. And it has to come soon. People can’t continue to allow corporate giants like Walmart to profit at their expense.