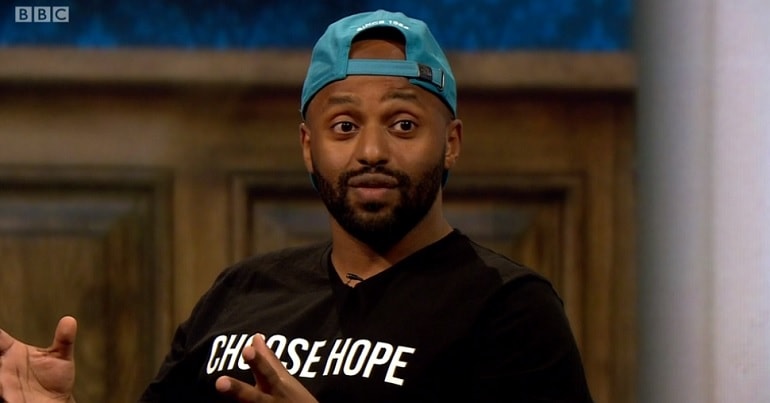 The Green Party’s Magid Magid has been making waves again. The former lord mayor of Sheffield and newly elected MEP appeared on BBC Newsnight and summed up the Conservative Party leadership race like no one else could.

On the show, he branded the contest “Britain’s next top bigot”. He also laid into Boris Johnson’s long-running history of making racist comments. Magid said:

I think honestly what the worrying thing is having someone like Boris Johnson who could potentially be the prime minister of this country with all his views… whether that be calling people “piccaninnies” … is this the sort of person we want to literally be the author of our future? And I genuinely don’t think it is.

Especially, even like, other contenders that are part of what do you call the leadership, like – honestly, you might as well call the Tory leadership contest Britain’s next top bigot.

When challenged by the former deputy chair of UKIP Suzanne Evans, who denied Johnson’s racism, he explained further:

Calling Black people more stupid than other people is not racist? He said that in the Spectator when he wrote that. It’s on paper. So if you don’t find that racist, I don’t know what you’ll find racist.

Racism in the Conservative Party

Magid’s not the first person to call out Johnson’s racist comments. In fact, they’ve been well documented for some time.

Johnson was forced to apologise for using the racist term ‘piccaninnies’ in a Telegraph article when he first stood for mayor of London in 2008. Two years earlier, he was also forced to apologise for associating Papua New Guinea with cannibalism. And in 2018, even Theresa May called him out after he referred to women who wear the niqab as “letter boxes”.

But racism in the Conservative Party doesn’t start and end with Johnson. In May 2019, Britain’s largest Muslim organisation – the Muslim Council of Britain – called for the Equalities and Human Rights Commission to formally investigate the party for Islamophobia. This followed the Conservative peer Baroness Warsi alleging that the party is “institutionally Islamophobic”.

This was one of many things contributing to Magid’s reputation as an outspoken politician with a unique approach to politics. In July 2018, while lord mayor of Sheffield, he declared Donald Trump a “wasteman” and ceremonially banned him from the city. And a month later he gave his backing to the Orgreave Truth and Justice Campaign – writing a letter to Sajid Javid written in phonetic Yorkshire dialect.

With Magid around, you can be sure that the Tories won’t be let off the hook for their racism in the future.