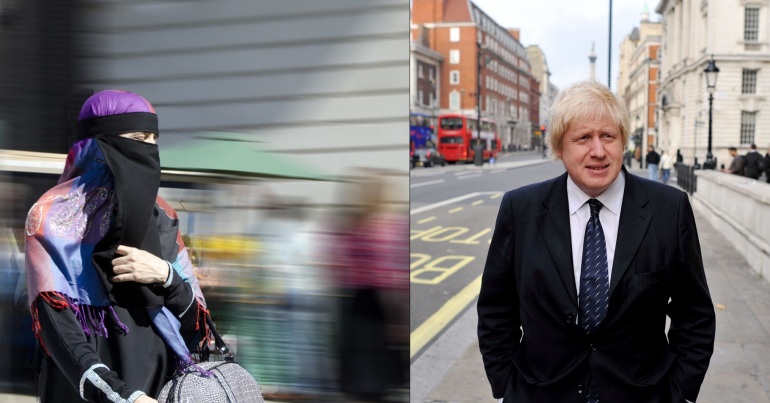 As the ‘debate’ on Boris Johnson’s comments about Muslim women who choose to wear the face veil rages on, one group of people is conspicuously absent from British media: Muslim women.

It’s a perfectly legitimate debate for people to have.

What is the ‘debate’?

I would like to ask here: what is the debate?

Is it that women who choose to cover their face should show it to authorities when their identity needs to be confirmed? Because this already happens. There is no debate here. Or is it about the UK banning face coverings in public, a position that both Pickles and Johnson have already professed to be against?

In reality, the only reason white men are so keen to debate the burqa or niqab is so that they can impose their views on Muslim women. Men wanting to exercise their authority and control over women by policing how they dress is nothing new. White men in power publicly describing Muslim women as “bank robbers” and “letter boxes” is both misogynistic and racist. It is boldfaced hate.

Humphrys, perhaps in an attempt to be edgy, asked Pickles:

He [Johnson] called the burqa ‘oppressive and ridiculous’, now is that acceptable language?

To this, Pickles responded that we should “avoid giving offence if we can”.

By couching the discussion in terms of “debate” and “offence”, both Pickles and Humphrys are guilty of justifying and enabling Johnson’s racism. Being referred to as ‘oppressed’, ‘ridiculous’, a ‘bank robber’, or a ‘letterbox’ is not merely offensive; it is traumatising and humiliating. And to humiliate a group of minority women in this way is a calculated move which sends a message to Johnson’s right-wing followers, making it clear whose side he’s on.

Later on, ITV‘s daytime show Loose Women decided to carry on the trend, by discussing the ‘issue’ of Muslim women’s face veil without the presence of a single Muslim woman. False comparisons were drawn with women travelling to Muslim countries being expected to follow a dress code. Yet no one cared to mention that in a supposedly liberal society, stopping women from dressing as they choose is as oppressive as forcing women to dress a certain way.

Moreover, some people have got the misguided impression that they have the right to tell Muslims what is and isn’t ‘a requirement’ in the Islamic faith.

@loosewomen ladies re @BorisJohnson the Burka full face coverings are NOT a requirement in the Koran. Dress modestly it says. Its a geographical culture thing and face coverings regardless of religion should be banned from public places. Ten years ago one of the London Bombers

The theme of everyone except Muslim women speaking on behalf of Muslim women, therefore, seems to be a persistent one. In his Radio 4 interview, Pickles declared: “The position that I have laid out is one that most people would agree with… particularly those who wear the burqa themselves” [emphasis added].

I would love to ask Pickles how many burqa-wearing women he consulted with before making such a confident statement. Either way, it’s clear that both ITV and the BBC find it acceptable to discuss Johnson’s comments without the presence of the very group that was his target: Muslim women.

What now of Tory Islamophobia?

Many senior officials in the Conservative Party, including PM Theresa May and Baroness Sayeeda Warsi, have called on Johnson to apologise for his comments.

These calls, however, have fallen on deaf ears, as no apology seems forthcoming. Meanwhile, the elephant in the room of Islamophobia in the Tory party continues to be ignored.

In all honesty, I can’t say that I’m surprised – or that I know many others who are surprised – at the level of Islamophobia in the Conservative Party. I don’t need an official inquiry to confirm what I already know, from this latest incident as well as many similar instances in recent years.

David Cameron, in his time as prime minister, called [paywall] Muslim women ‘traditionally submissive’. He singled out “Islamist extremism” as the problem while the EDL marched unobstructed in Luton, and later said [paywall] Muslims were not doing enough to tackle extremism. Conservative MPs Sarah Wollaston [paywall] and Nadine Dorries have regularly undermined the agency of Muslim women by calling the Muslim face veil oppressive and anti-feminist. Pickles’ letter to the Muslim community in his time as communities secretary was widely criticised for being condescending and “unhelpful”.

For years, Islamophobia from the highest levels of the Conservative Party has been unabashed and persistent. How much more evidence do we really need? If Baroness Warsi was truly perturbed by the situation, the right thing to do – for her and other Muslim Conservatives – would be to dissociate from a party that has built its foundations on attacking the most marginalised and vulnerable people in our society.