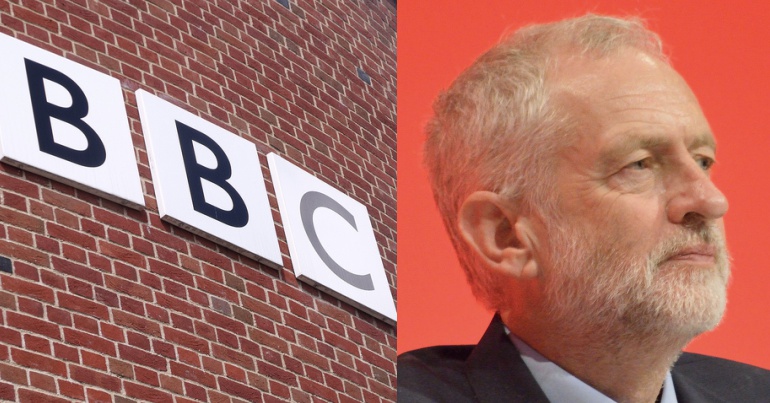 At 6pm on 9 August, thousands of people plan to switch off the BBC. This is to protest against what many feel is biased reporting from the broadcaster.

Using the hashtag #BBCswitchoff, people on Twitter aim to show solidarity across social media to support Jeremy Corbyn and other Labour members amid the latest accusations of antisemitism engulfing the Labour Party.

Many people are critical of the BBC‘s political coverage:

For one night let’s switch off all BBC channels. If you’re tired of the propaganda, bias & contempt held against the opposition while the corrupt government gets a free pass on #marr #bbcqt #bbctw & all political programming, tired of complaints going nowhere; then #bbcswitchoff pic.twitter.com/BM7EiBWSFU

Attacks on the Labour leader have been constant from within the party and the mainstream media. But social media has become a powerful tool of resistance.

On 2 August, thousands shared #WeAreCorbyn images, comments and memes. On 5 August, thousands stood in solidarity with Corbyn again as #ResignWatson went viral after Labour deputy Tom Watson broke ranks to criticise Jeremy Corbyn in the Observer. Both of these went viral in the UK and globally:

And ‘BBCswitchoff’ looks set to do the same, as momentum has been gathering for days.

For many, there is a common reason to participate:

For all Socialists with/without TV .
For too long now the BBC has smeared Labour and Corbyn with despicable, atrocious; scathing lies. It's time for us to join together, in solidarity this Thursday and "Shut Them Down" Switch off the BBC at 6pm and join the storm.#BBCswitchoff pic.twitter.com/3AqGsppE04

I shall be in the Twitterstorm tonight from 6pm because I'm sickened by BBC News' blatant bias against Corbyn and their readiness to interview his PLP opponents who seek to bring him down. #BBCSwitchoff

Others are critical of the BBC‘s reporting of Boris Johnson’s offensive comments about Muslim women:

There's something wrong in our country when a man, who has stood up against racism all his life is vilified by the MSM/BBC (wrongly) as an Anti Semite. Then Boris Johnson comes along with a blatantly racist comment, and treated like a comedian. #BBCSwitchOff . Sickening 😡🌹🌹

Meanwhile, some have questioned the impartiality of influential staff who work there:

#BBCSwitchOff This Thursday
Switch off all has-BeeB channels and join the storm 6pm here on Twitter this Thursday. pic.twitter.com/cnLGFNRffk

The revolution will not be televised

Unfortunately, antisemitism does exist. And it’s only fair that Corbyn and his supporters, including many Jewish people, are given adequate coverage when they speak out against it.

As The Canary reported on 8 August, Jewish Voice for Labour (JVL) organised a protest outside the BBC. Protesters challenged what they also see as the BBC‘s role in perpetuating the Labour antisemitism row, and delivered a letter of complaint. Because many in pro-Corbyn Jewish communities feel excluded. As JVL secretary Glyn Secker explained: “They really don’t want us on the media”.

But social media is changing that. In the 2017 general election, Corbyn “increased Labour’s share of the vote by more than any other of the party’s election leaders since 1945”. And subsequent analysis and research showed that Labour’s grassroots support and use of social media was key to this success.

Although editors or owners might control the output of the BBC and most mainstream media outlets, they don’t (yet) control ordinary people’s voices on social media. Recent events have shown just how important this is.

The BBC ignores movements like this Twitterstorm at its peril. Because although the current revolution isn’t televised, that certainly doesn’t mean it’s not happening.

– Find out about the work done by the Media Reform Coalition.