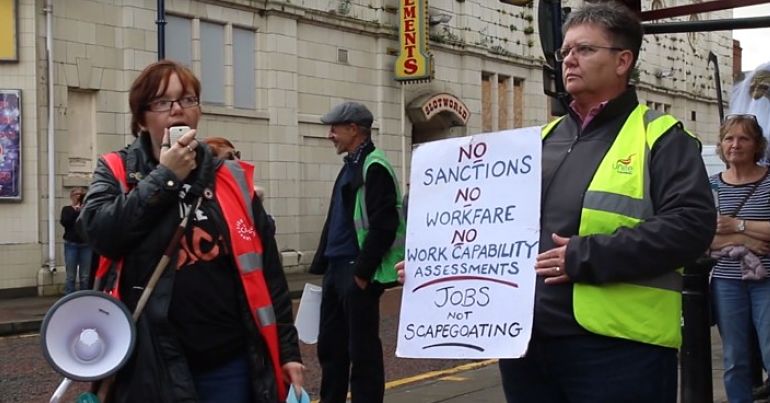 An inspiring activist says the Labour Party has deselected her from being a council candidate in Greater Manchester, due to an unpaid council tax bill:

However I owe council tax, a big NO NO. I’m not ashamed of being poor. It’s a fact. I’m working class and proud of it. However to cut along story short I have been deselected because of this.

Charlotte Hughes is an activist/blogger who champions the experiences of people forced to negotiate Britain’s cruel benefits system. Her blog, The Poor Side of Life, details the weekly demonstration she organises outside Ashton-under-Lyne job centre in Greater Manchester.

Hughes’s work not only brings the realities of being on benefits in Britain alive. She and her fellow volunteers’ continued presence offers support to those forced towards the job centre. In Hughes’s own words:

That space outside the jobcentre is a safe place. Because they’ve not got one inside.

The Labour Party selected Hughes as a council candidate for the Ashton Waterloo Ward in the upcoming Ashton-under-Lyne by-election:

Congratulations to anti poverty campaigner @charlotteh71 who has tonight been selected as our Labour Party candidate for Ashton Waterloo Ward in my constituency in the upcoming council by election. I look forward to campaigning hard with Charlotte and our Labour Party team 🌹 pic.twitter.com/fBPVGKh81W

However, she says it has now deselected her due to an unpaid council tax bill:

However I owe council tax, a big NO NO. I’m not ashamed of being poor. It’s a fact. I’m working class and proud of it. However to cut along story short I have been deselected because of this.

As the Independent reported, research by the Equality Trust found that:

Low earners pay an average of seven per cent of their income in council tax while the wealthiest households pay just 1.5 per cent.

But Hughes says the Labour Party believes that owing council tax brings it into disrepute:

Having a council tax debt is seen by the Labour Party as bringing the party into disrepute.

However, Hughes has appealed the decision:

“The poorest shouldn’t be disenfranchised”

Despite the setback, Hughes remains upbeat. She told The Canary she sees this:

as an opportunity for change within the Labour Party. Being poor and in debt isn’t a crime. However, it is still regarded as such by some. The whole rhetoric surrounding debt needs to change. Most debt has been created by the government’s austerity methods.

Whilst I accept that having a council tax debt could cause problems whilst standing as a councillor, it shouldn’t prevent you from being one either. Labour councils need to support local communities and Labour Party members as much as possible and make ambitions such as mine possible. The poorest shouldn’t be disenfranchised and prevented from being councillors and MPs because of this.

And support for Hughes’s cause is growing on social media. Guardian columnist Frances Ryan called the decision “a terrible shame”:

This is a terrible shame – Charlotte has been deselected because of council tax debt. I’m not 100% on the rules on this but it seems like a result is working class people can’t afford to represent their communities. https://t.co/AMUIDv9lVJ

This councillor and true activist won vote of local people but was deselected by her party because she has council tax debt. This is the LABOUR party which is supposedly the voice of the working class. Has it forgotten that? #shame https://t.co/V4u0FMwJuH

Something wrong with selection procedures here… Council Tax Arrears a precluding factor for holding elected office? Seems disciminatory against people who happen to be poor. https://t.co/Y9R1HpRhhZ

Do read. Poverty shouldn't be a reason for exclusion, in my ever so 'umble opinion. https://t.co/8rMc4bB3SP

In July 2018, Labour announced it was bringing in changes to “radically diversify the party”. The party won’t pass these changes until its September conference. However, blocking an inspiring activist from standing for election simply because of her financial status flies in the face of this message.

Hughes has consistently demonstrated that she is driven by opposing this government’s cruel policies and giving a voice to marginalised communities. At a time when the Labour Party is dominated by career politicians fighting amongst themselves, she would be a breath of fresh air.

It’s time for the party to set both the record and its priorities straight.

The Canary contacted the Labour Party for comment but received no response by the time of publication.

– Read Hughes’s blog, The Poor Side of Life.