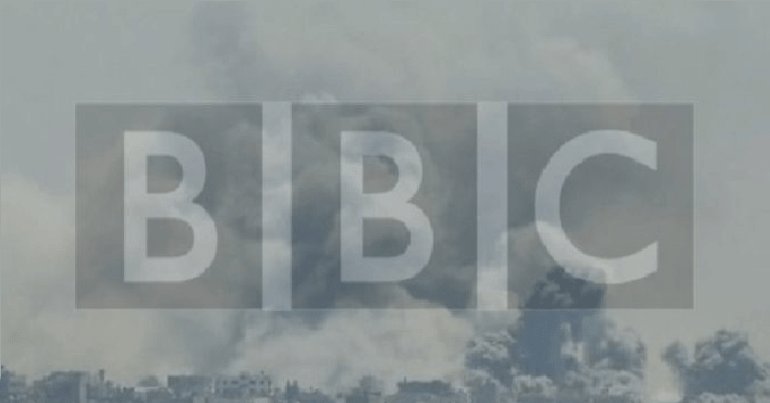 The BBC has bowed to Israel’s foreign office and changed a headline on the occupation. And the public service broadcaster’s new headline risks whitewashing the Israeli military’s most recent killings.

On 8 August, Israeli airstrikes killed at least three people in Gaza, including a toddler and a pregnant woman.

Israel blames Hamas, which had launched 150 rockets at Israel from Gaza, for the escalation. There were no deaths as a result of this rocket fire.

Israeli pressure on the BBC

The BBC initially covered the fatalities with the straightforward headline Israeli air strikes ‘kill pregnant woman and a baby’.

.@BBCWorld this is a formal complaint by @IsraelMFA .This title is a deliberate misrepresentation of reality ( that’s the polite equivalent of “ this is a LIE”, if you don’t get it). Israelis were targeted by Hamas and IDF acts to protect them.Change it IMMEDIATELY!!! @IsraelMFA pic.twitter.com/pqjXuopXgO

The Board of Deputies of British Jews also complained.

And shortly after, the BBC complied:

So, @BBCNews capitulated to @BoardofDeputies, thus:
1. Obfuscating the fact that *Israel* had killed a woman and toddler
2. Implying that Israel was merely 'retaliating' in response to attacks from Gaza (the standard Israeli narrative)
Shame on the BBC.https://t.co/OnwKwrwmyX pic.twitter.com/p5URIpST9M

Media Lens accused the BBC of “obfuscating” the killings. In fact, there may be a greater danger if a reader sees the BBC‘s new headline – Gaza airstrikes ‘kill woman and child’ after rockets hit Israel. Without reading the article, someone could think that ‘Gaza airstrikes’ means Palestinian airstrikes killed Israelis, while the opposite is true.

When confronted on this, the BBC told The Canary:

Although the original headline was not factually incorrect, we updated it to add more context.

For months, Palestinians have been protesting the conditions in occupied Gaza, where less than 4% of water is drinkable. Israel has responded with force, killing at least 154 Palestinians and wounding over 16,000 since 30 March.

Reaction to the BBC‘s headline change

Some expressed concern over the influence Israel has over the BBC:

The influence Israel has over the BBC is alarming… pic.twitter.com/cvdPQEvCwg

A former BBC evening news editor once said that:

We wait in fear for the telephone call from the Israelis

There are well-documented allegations about the influence of the Israeli lobby over the BBC. These include other instances where the BBC has apparently bowed under pressure to change headlines to make them less accusing of the state of Israel.

Now, the BBC risks going further than downplaying the violence. People could interpret the new headline to mean Palestinians have killed Israelis rather than the other way around. If that’s not breaking the BBC‘s editorial guidelines, nothing is.

– Find out more about the BDS movement here.