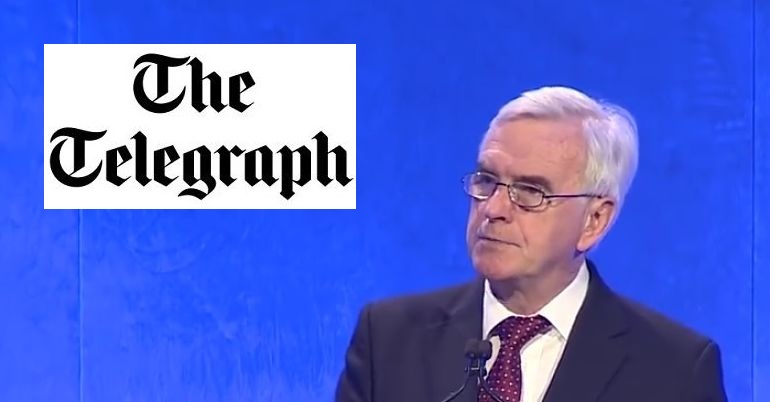 The Telegraph attacked [paywall] John McDonnell on 8 August for describing an Israeli assault on Gaza as an attempted “genocide”. Labour’s shadow chancellor made the comment during a speech in 2012.

But the Telegraph chose an unfortunate week to dredge up this particular characterisation of Israel’s actions from McDonnell’s past. Because the country is currently blocking the United Nations (UN) from providing emergency fuel to Gaza.

The UN says the fuel provides “a minimum level of life-saving services” to Gazans and that:

The well-being of two million people, half of whom are children, is at stake.

That’s the entire population of Gaza – including around one million children – which Israel is putting at risk of “a disease outbreak or other major public health concern”, among other things.

No wonder McDonnell stands by his words:

Telegraph doing number on me about 2012 speech.Our response:”John takes pride in & stands by his track record of forcefully & justifiably condemning brutal attacks on the Palestinian men,women &children of Gaza &will always stand up for victims of such disproportionate violence.”

The UN distributes approximately 950,000 litres of fuel a month to Gaza. It powers backup generators at hospitals, water and sewage treatment sites, and waste collection services. Gazans depend on the UN’s supply because they currently only get four hours of electricity [paywall] each day.

Since 2 August, however, Israel has blocked entry of the fuel. It also restricted entry from 16 to 24 July. The United Nations Office for the Coordination of Humanitarian Affairs (OCHA) is urging it to reconsider. Its humanitarian coordinator, Jamie McGoldrick, said:

Restricting the entry of emergency fuel to Gaza is a dangerous practice, with grave consequences on the rights of people in Gaza… It is unacceptable that Palestinians in Gaza are repeatedly deprived of the most basic elements of a dignified life.

The UN says that it needs to deliver 60,000 litres of fuel immediately to ensure even “the basic functioning” of 46 “critical facilities” in Gaza. It also points out that over 2,000 hospital patients are at the “highest risk” because they’re dependent on electrical devices.

Israel’s fuel blockage, which it says is in response to ‘incendiary kites’, comes at an already dire time for Gazans. Israel has maintained a brutal blockage of the strip for 11 years. As renowned academic Noam Chomsky has explained, Israel has effectively put Gaza on a “diet” whereby it allows people there “just enough calories… so they don’t all die”.

Jewish intellectual Norman Finklestein summed up [0.28] the situation for people in Gaza in an interview earlier this year:

70% of the people of Gaza are refugees. More than half are children. They’re trapped. There’s no way out. And the UN reports, and even Israel is saying, the situation there is ‘unliveable’. Now you use your own semantical imagination – how would you describe a situation where people are caged into conditions which are literally unliveable? What word would you use?

A devastating description of the grave situation in Gaza by Norman Finkelstein. pic.twitter.com/0siv2mB9MK

Meanwhile, Israel has carried out a number of crushing military campaigns in Gaza, costing thousands of lives. As The Canary reported previously:

rocket and mortar attacks from Gaza reportedly killed 30 civilians in Israel between 2001 and August 2014. But during the 2014 Israeli assault on Gaza alone, Israel killed at least 1,483 Palestinian civilians. Five civilians died in Israel during that same conflict.

On 8 August 2018, Israel killed a pregnant woman and her 18-month-old child during its military retaliation to non-fatal rocket fire from the strip.

The UN includes a number of examples of what constitutes genocide in its definition of the crime. One reads:

The blockade, the diet, the bombing, the caging of Gazans in “the world’s largest open-air prison”, and now the fuel restriction – which is putting “the well-being” of all Gaza’s citizens “at stake” – certainly appears to fit that description.

So it’s no wonder McDonnell won’t retract his comments. And the Telegraph truly picked an unfortunate time to point them out.

– Help to spread support for Palestinians’ basic human rights by joining the #MeTooGaza campaign. And see The Canary‘s interview with a Jewish activist from #MeTooGaza here.