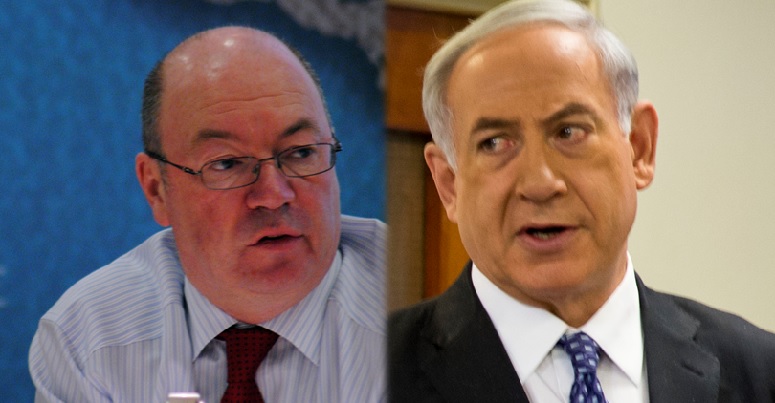 On 29 May, tensions between Israel and Gaza reached levels unseen since the deadly Israeli offensive on the territory in 2014. And just two weeks after Israel murdered dozens of Palestinian protesters, the hypocritical responses from the West – and one UK Foreign Office minister in particular – have drawn criticism.

Israel’s army has reportedly killed 112 Palestinian citizens – and shot 502 in the head or neck – since 30 March. And it murdered more than 60 protesters in just one day on 14 May. These killings sparked international condemnation.

Some militants in Gaza responded to escalating tensions on 29 May by firing approximately 28 mortar rounds and rockets towards Israel. Haaretz later updated this figure to “over 70 rockets”. There were reportedly no resulting deaths.

The UN Human Rights Council (UNHRC) voted to investigate Israeli violations of international law in Gaza after the massacre of 14 May, suggesting that the occupying state’s actions were “wholly disproportionate”. But the UK abstained, and the US voted against.

Now, however, UK and US officials are up in arms – despite there being no apparent loss of life on 29 May.

The UK’s minister of state for the Middle East, Alistair Burt, tweeted:

I condemn the rocket fire from #Gaza into Israel today. Indiscriminate attacks against civilians, especially those that risk killing or injuring children, are completely unacceptable under any circumstances.

And some people were quick to notice just how different this was from his response to Israel’s massacre of Palestinian protesters just two weeks earlier (in which he didn’t even mention Israel, and essentially shifted blame away from Israeli forces):

Extremely saddened by loss of life in Gaza today. Concerned peaceful protests are being exploited by extremist elements. Urge restraint in use of live fire. Violence is destructive to peace efforts. UK remains committed to a two-state solution with Jerusalem as a shared capital.

When Israel is the target, the FCO *condemns* attacks unreservedly and says they are “completely unacceptable”.

When Palestinians are *actually killed* the FCO just “urges restraint” on Israel and part-blames protesters.

The US, meanwhile, essentially defended Israel’s violence on 14 May. But on 29 May, the US mission to the UN called for an emergency Security Council session, insisting that “the Security Council should be outraged and respond to this latest bout of violence directed at innocent Israeli civilians, and the Palestinian leadership needs to be held accountable for what they’re allowing to happen in Gaza”.

Israeli officials have insisted that their country has launched “the largest retaliatory attack” and is “at the closest point to the threshold of war” since 2014. And indeed, rockets from Gaza are unlikely to have any positive impact. Because Israel’s government clearly cares very little about Palestinian lives. And while occupied Palestine depends mostly on low-tech tools, the Israeli occupiers have state-of-the-art weapons. So there is little wonder that the conflict is so lopsided. As a case in point, rocket and mortar attacks from Gaza reportedly killed 30 civilians in Israel between 2001 and August 2014. But during the 2014 Israeli assault on Gaza alone, Israel killed at least 1,483 Palestinian civilians. Five civilians died in Israel during that same conflict.

Other commentators have insisted that the ongoing and devastating blockade that Israel has imposed on Gaza makes Palestinian desperation and resistance inevitable. As the UN has previously said, “a full lifting [of the Israeli blockade] is paramount to stopping further deterioration of the living conditions and preventing new cycles of violence”.

Some members of Israel’s parliament (MKs) have also highlighted the importance of context to the current escalation in hostilities. MK Jamal Zahalka said:

The Israeli government is being pushed into a corner by the non-violent demonstrations in Gaza and is initiating a military confrontation to stop them.

The vast majority of those killed and injured in Gaza in recent weeks were Palestinian civilians, and therefore the Israeli government bears responsibility for the escalation.

Tibi also stressed that the “siege” (i.e. the blockade) “is the root of all evil and is what is driving the tension, friction and confrontation”.

When propaganda runs ahead of the facts

Israeli prime minister Benjamin Netanyahu was also quick to react on 29 May. So quick, in fact, that he apparently forgot to check the facts.

As Haaretz reported, however, his account deleted the meme “less than an hour later” – probably after realising that his ‘truth’ was inaccurate. 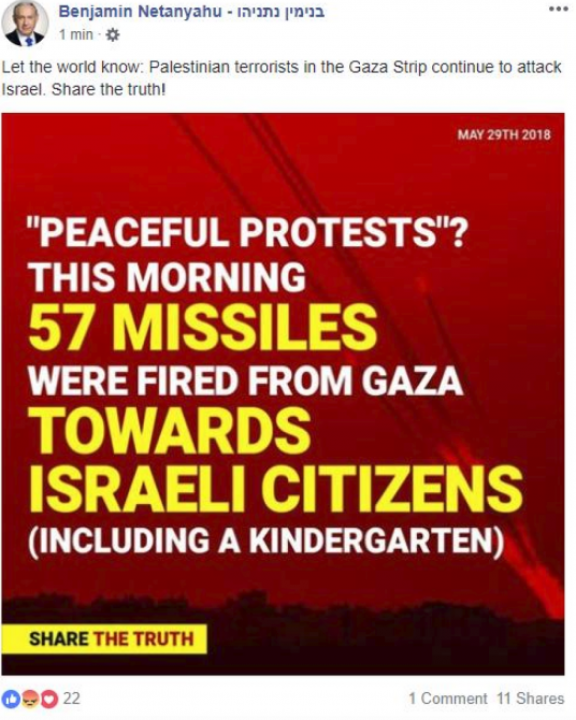 An edited version of the image above – mentioning “dozens of missiles” rather than a specific number – appeared on Netanyahu’s social media soon afterwards. And Haaretz later appeared to delete its reference to this.

@netanyahu corrected his tweet from earlier. It's not "57 missiles" but "dozens of missiles". News reports talk about almost 30 mortars fired towards Israeli-held territory. Most intercepted pic.twitter.com/hddS9ycGOD

The Netanyahu family is currently embroiled in corruption and fraud investigations. And amid this environment, the prime minister has called major media outlets “fake news”. So the apparent inaccuracy of his own social media posts must be embarrassing.

Several fronts in a battle on truth

So first of all, we have utter hypocrisy from Western governments – which treat Palestinian deaths as ‘sad’ but non-fatal attacks on Israel as “completely unacceptable under any circumstances”. Secondly, we have a response to Gazan rockets devoid of the context behind them. And thirdly, we have Israel’s prime minister spreading dodgy information.

There isn’t just a battle going on between Israeli occupiers and occupied Palestinians. There’s also a battle on truth, on context, and on political consistency. And in that battle, we’re all on the frontline.

– Always question the information you read. And if in doubt, search for alternate sources.