Just when you thought things couldn't get worse for the Brexit secretary, Jeremy Corbyn scores a massive coup - Canary 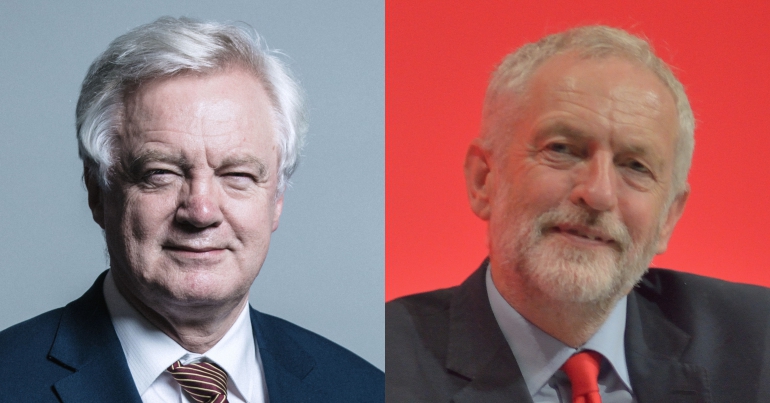 Jeremy Corbyn has just scored a coup over Brexit secretary David Davis. One of his Brexit officials, Mike Hatchett, has left the Brexit office to work for Labour. And Whitehall is reportedly very unhappy about the move.

Hatchett’s departure comes just as it seemed that things couldn’t get worse for the government’s Brexit plans. On 16 May, the EU withdrawal bill suffered its 15th defeat in the House of Lords. Meanwhile, Theresa May’s cabinet is close to splitting over varying competing Brexit agendas. And then there’s the thorny issue of May’s fragile alliance with the DUP and the issue of a hard border in Northern Ireland.

Hatchett worked for Jeremy Corbyn as his head of economic policy until six months ago. But he left the job to work for the Conservative Party’s Department for Exiting the European Union (DExEU). According to Politico, his departure was described by a senior Labour official as “a big blow to Corbyn”.

Now, he has returned to the Labour Party as director of policy and research. A Whitehall source accused him of playing “hokey cokey”. And another stated:

It has gone down pretty badly to have someone walking out of the door and straight back to the opposition.

This view was echoed by Sun journalist Harry Cole:

According to Huffpost, a Labour Party source stated:

Getting Mike back is a real coup for the party. He brings a calm head and a huge weight of knowledge.

And Huffpost executive editor Paul Waugh summed up the situation:

Not so much exiting the EU as exiting the Govt.
Whitehall man Mike Hatchett is Labour's new Director of Policy and Research, HuffPost told.https://t.co/MlhCsM4CD6

Hatchett is known as an expert in European policy. But a spokesperson for DExEU downplayed his role:

Mike Hatchett works for DExEU as a middle-ranking civil servant. In line with policy, he has informed us that he wishes to take up a new role outside of Government.

Under the Government Business Appointment rules we have reached an agreement with Mr Hatchett and placed a series of conditions regarding this appointment, which he and his future employer are aware of, as per the usual protocols of this policy.

One thing, however, is clear. With Brexit negotiations at a critical time both domestically and internationally, Hatchett’s defection back to Labour couldn’t have come at a worse time for the government.