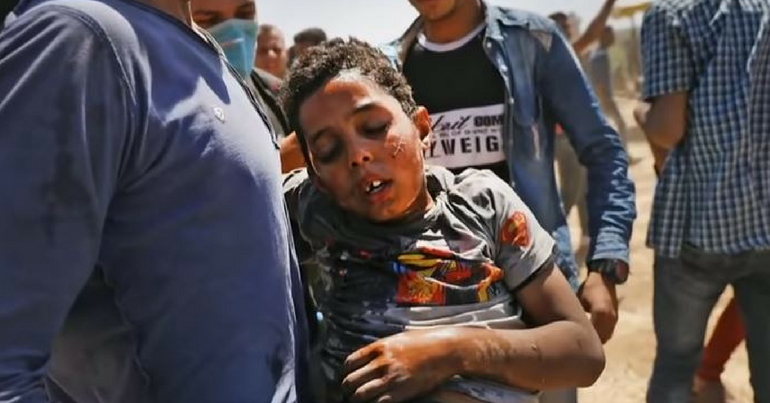 Two Foreign Office ministers have tweeted their ‘concern’ about the recent Israeli killings of protesters in Gaza. But both managed to do so without even mentioning Israel.

On 14 May, the Israeli military killed at least 60 Palestinians who were protesting on the same day as the highly controversial relocation of the US embassy to Jerusalem. Shortly afterwards, minister of state for the Middle East Alistair Burt tweeted:

Extremely saddened by loss of life in Gaza today. Concerned peaceful protests are being exploited by extremist elements. Urge restraint in use of live fire. Violence is destructive to peace efforts. UK remains committed to a two-state solution with Jerusalem as a shared capital.

He utterly failed to mention Israel, instead blaming “extremist elements” for exploiting peaceful protests. His weasel words sparked quite a reaction:

“Loss of life” … as if this was some inexplicable natural phenomena

Not long afterwards, minister of state for the Commonwealth and UN Lord Ahmad weighed in:

UK support for Israel is off the scale extreme. Look at this statement from Foreign Minister ‘Lord’ Ahmad – he’s actually blaming the Palestinians. This apologist for mass murder is the UK’s ‘Human Rights Minister’. pic.twitter.com/m5kUq841ba

He, too, failed to mention Israel. And like Burt, he blamed “extremist elements” for “exploiting” the situation. He was retweeted by Mark Curtis, but appears to have since deleted his tweet – sending out a new one instead which did mention Israel.

A third Foreign Office minister, Harriett Baldwin, could only manage to retweet a statement from the UK ambassador to the UN – again, utterly failing to mention Israel and blaming “extremist elements”:

We are appalled by the loss of life in Gaza.

It is concerning that the peaceful protests have been exploited by extremists elements.

We urge restraint in the use of live fire.

Any further escalation is in no-one’s interest.

Meanwhile – and uncharacteristically – foreign secretary Boris Johnson had little to say on Twitter. However, the Foreign Office put out a statement on his behalf:

In a statement made by Foreign Secretary ⁦@BorisJohnson⁩ after meeting his French counterpart ⁦@JY_LeDrian⁩, he expressed concern over the violence and casualties ⁧in Gaza pic.twitter.com/ksgiqJpjZ1

There was “concern” and “sadness” about the “loss of life” but, once again, no mention of Israel. In fact, Johnson appears to want to avoid the whole situation. The day after the massacre, he made a rapid exit from the House of Commons rather than face a question on Gaza from shadow foreign secretary Emily Thornberry.

A common thread runs through all the statements from Foreign Office ministers. They’re “saddened” and “concerned”. They all mention, or reference, “extremist elements”. But they avoid using the word ‘Israel’ as much as possible. And far from condemning the murders, the most they can do is to “urge restraint” from the murderers.

The government’s sycophancy and determination to support a murderous apartheid state at all costs is utterly shameful.