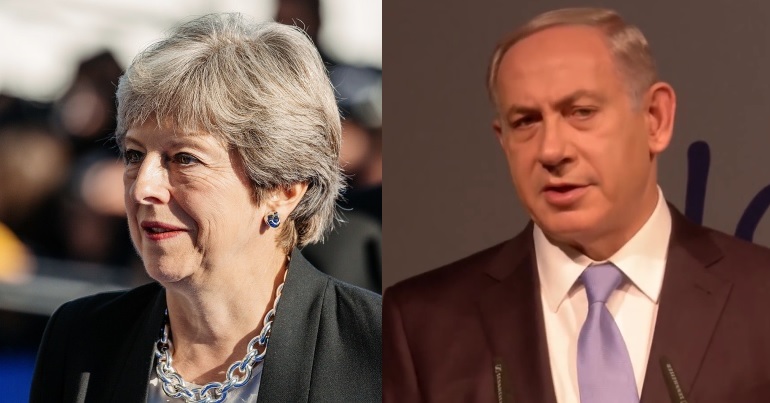 On 14 May, at least 60 Palestinians were killed by Israeli troops. On 18 May, the UN Human Rights Council (UNHRC) voted to investigate violations of international law in Gaza, where the massacre happened. It said Israel’s actions were potentially “wholly disproportionate”.

But the UK abstained in the vote, a move which has disgusted many.

On 16 May, Theresa May called for an independent investigation and said these events were “tragic and extremely concerning”. Foreign secretary Boris Johnson claimed to be “extremely saddened by the loss of life”.

The UNHRC called an emergency session to decide whether to investigate “human rights violations” during the massacre. 29 countries voted for the investigation. And the council condemned “the disproportionate and indiscriminate use of force by the Israeli occupying forces against Palestinian civilians”.

The UK was one of 14 countries to abstain. Australia and the US voted against.

29 votes in favor, 14 Abstain, 2 against • UN #HRC adopts resolution to establish an independent, international commission of inquiry, to investigate all alleged violations and abuses of international humanitarian and human rights law in OPT, particularly in occupied #Gaza #SS28 pic.twitter.com/s5bbQ85TBi

Many questioned the sheer hypocrisy of the UK government after the vote:

I'm delighted by the UN's Human Rights Council resolution calling for an urgent independent investigation of Monday's massacre in Gaza, but disgusted that the UK government abstained.

I welcome the UN Human Rights Council resolution calling for an urgent independent investigation of Monday's massacre in #Gaza. I'm disgusted, however, that the UK Government abstained – an act of profound cowardice that shames our country on the world stage.

Today:
FO Minister Harriet Baldwin gave a speech saying "International Law is the very foundation of peace and security"
AND
The UK representative at the UN abstained on a vote to use International Law to hold an inquiry into the Gaza massacre.

Honesty, the Tories are scum.

Others have gone further and accused the UK of “supporting Israeli mass murder”.

UK abstains on UN vote to investigate Gaza killings because it will not also investigate Hamas! Instead, UK calls on Israel to carry out its own enquiry. Words fail. No one can now be in any doubt – the UK is supporting Israeli mass murder. https://t.co/HmWVrRL90w pic.twitter.com/dogEWZXiRo

Ryvka Barnard, senior campaigner for War on Want, said the abstention made “a mockery of the UK’s stated commitment to international law, human rights, and accountability”. War on Want called the vote “disgraceful”:

Disgraceful decision by the UK to abstain from Human Rights Council vote for a commission of inquiry into Israel's killing of unarmed protesters in Gaza. Trusting that Israel will sincerely investigate its own war crimes is an insult to any common sense definition of justice. https://t.co/91BUzGVbdR

But while the UN human rights chief Zeid Ra’ad Al-Hussein’s condemnation of the violence has been fairly widely reported, very few outlets have highlighted the UK vote:

Can anyone find any UK 'mainstream' media outlet that has even reported the UK abstention on the UN vote on Gaza? (I've only seen this reported in the Independent).

In a BBC article on the vote, for example, there is no mention of the UK abstention:

Here's how the BBC reported on the #UNHRC's vote to investigate #Israel's human rights violations in #Gaza.
"The UN's Human Rights Council voted to set up an independent investigation."
No mention of the UK abstaining from the vote at all!https://t.co/9VGXrn9Ylr

I'm delighted by the UN's Human Rights Council resolution calling for an urgent independent investigation of Monday's massacre in Gaza, Maybe they need to start with our BBC & right wing journalist & the UK government as they always seem to know everything they want to protect???

But, as people have pointed out, this is only the latest criticism of the BBC‘s ‘impartial‘ coverage of the massacre:

'Why did Israel use murderous force at Gaza protests?'

Over 2,400 people were injured as the Israel Defense Forces (IDF) opened fire. Children and a baby are among the dead and injured. Israel and the US have defended the violence.

But the UK is complicit in this violence. As Caroline Lucas said:

A small selection of the weapons sold by the UK to Israel last year:

We are complicit in the slaughter – and must stop these sales immediately.

Important News: UK Labour Party leader @jeremycorbyn described Israel's killings as an "outrage" & called for the review of UK arms sales to Israel. An #ArmsEmbargo is the most effective response to Israel's horrific massacre in #Gaza. #StopArmingIsrael #Nakba70 #GreatReturnMarch pic.twitter.com/qVBaAylYAd

But the government appears to be washing its hands of these sales once the deal has gone through:

Everything you need to know about UK arms exports in a single sentence:

“We do not collect data on the use of equipment after sale.” https://t.co/hdZZeAGEHM pic.twitter.com/L0A7gtCrlu

Gazans are under siege in an open air prison. As Haidar Eid, a professor at Al-Aqsa University said:

When Israel is not sniping us down or bombing us, it exerts great effort to ensure that we live in subhuman conditions under siege in Gaza. We get electricity for only 4 hours a day, 95 percent of our water is undrinkable, and our seriously ill wither away as they wait for months for a permit to get treatment in the West Bank.

Through arms sales, our government is complicit in this tragedy. And its vote after the recent “mass murder” has made that complicity abundantly clear.

–  Read more stories about Gaza from The Canary