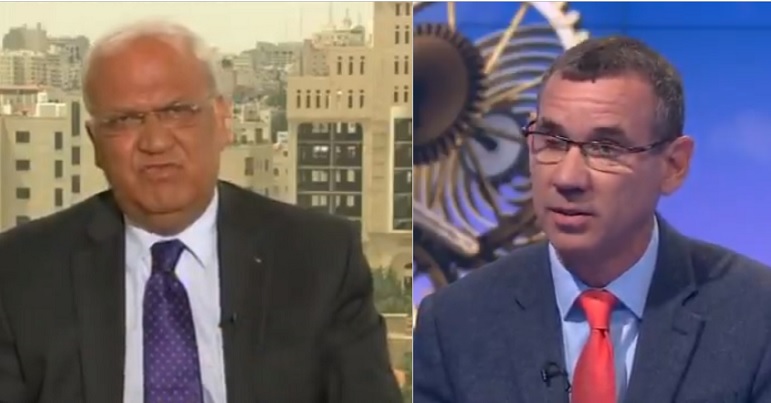 On May 14, Israeli forces opened fire on protesters in Gaza, killing at least 60 people. This brought the number of Palestinians killed during recent demonstrations to 104, including 12 children.

The Israeli ambassador tried to justify these killings on the BBC. But his argument was shut down by Palestine’s chief negotiator.

Israel’s ambassador to the UK, Mark Regev, was challenged on the killings in an interview on the BBC’s Sunday Politics. In response, Regev suggested Israel’s use of force was due to a violent threat from Hamas:

The Hamas leader in Gaza, Sinwar, himself said what the goal [of the protests] was. He said the goal is to breach the border, infiltrate into Israel, and kill our civilians.

Presenter Sarah Smith pressed Regev on the proportionality of the violence. She drew attention to reports of killings which happened up to half a kilometre from Israel’s apartheid wall. Regev was once again dismissive. He suggested such reports could not be verified because of the Hamas government in Gaza:

there are reports about all sorts of things. And the trouble is, when you’re dealing with a Hamas regime in Gaza, there is no independent way to check exactly what happened.

And asked whether he would support an independent investigation into the killings, Regev suggested an inquiry by the UN would be untrustworthy. Instead he implied those responsible for the murders should investigate them:

I would welcome and I would urge people to look at our own system, internally, of checks and balances.

You can watch a segment of his interview here:

Speaking to @BBCsarahsmith on an independent inquiry on the Gaza violence @MarkRegev says: “I would urge people to look at Israel’s own system internally of checks and balances.” #bbcsp pic.twitter.com/1ECTI7nrOq

“That really scares me”

Immediately after the interview with Mark Regev, Palestine’s chief negotiator Saeb Erekat spoke on the programme. Responding to claims of violent intent behind the protests, he said:

Well, that really scares me, you know, when you have 64 Palestinians killed and 2,500 wounded. Not a single Israeli was wounded… And then you have spokesperson like Mr Regev, and Mr Netanyahu, and Mr Lieberman, the Defence Minister, who said there are no innocent people in Gaza. So he’s giving his soldiers the… green light to kill as many as possible. And instead of Mark Regev standing tall to say: ‘I give my condolences to these Palestinians, we should make peace, and so on’, he’s justifying the killing and murders.

When asked again on violence behind the protests, and specifically the role of Hamas, Erekat rebutted claims made earlier by Regev:

Mark Regev knows that in 2014, 2011, when there were clashes between Hamas and Israel, Hamas uses missiles, tunnels, guns and so on. But not one single demonstrator was involved in this. There were people from Hamas participating… but mainly from the civil society.

He finished the interview with a statement on the wider context of the demonstrations and the killings in Gaza:

This is the absence of peace. This is the results of Netanyahu’s policies of settlements, dictations. This the results of Trump’s administration moving the embassy and dictating on Palestinians …  we in the PLO have recognised the State of Israel’s right to exist in peace and security on the 67 line. I want any of your Israeli guests, I want anyone, anyone, anyone to say that they are willing to recognise the state of Palestine to live in peace and security on the 67 lines. They don’t do that. They do settlements, dictations, siege, enclosure, killing, murdering, massacres. And they want to get away with it.

You can watch Erekat’s close here:

“We welcome an independent inquiry,” says Sec. Gen. of the Palestine Liberation Organisation Saeb Erekat and asks the Israeli government, “what are you afraid of?” #bbcsp pic.twitter.com/QxsanyaNbc

Israel’s actions have drawn international condemnation, and the cracks are showing in its propaganda. The more people see interviews like this, the more they’re becoming alerted to the reality in Palestine.