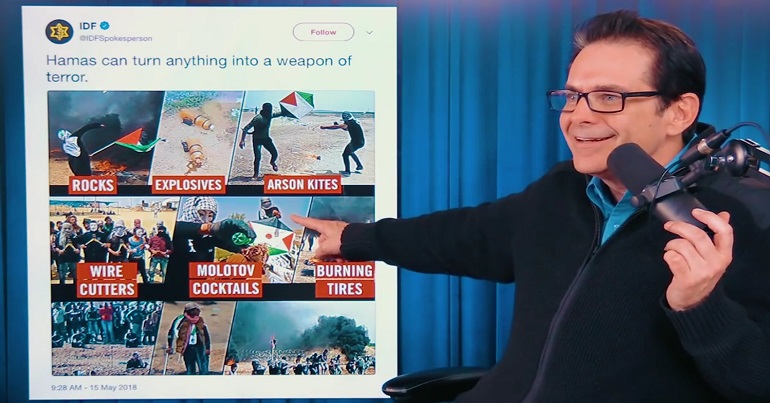 The UN says that, between 30 March and 18 May, the Israeli military killed 87 Palestinian demonstrators, including 12 children, with “over 12,000 people” injured and “more than 3,500 of them by live ammunition”. The Israel Defence Forces (IDF) say the fault lies with Hamas and the Palestinians. But comedian Jimmy Dore has now joined the list of people who have destroyed this ridiculous argument.

On 15 May, the IDF tweeted out “Hamas can turn anything into a weapon of terror”, with an infographic that displays Palestinian demonstrators in different scenarios.

The infographic is a montage of nine different pictures of Palestinians, inside Gaza, with different labels of ‘weapons of terror’, such as “rocks”, “children”, “explosives”, “wire cutters”, “burning tires”, and “arson kites”.

Hamas can turn anything into a weapon of terror. pic.twitter.com/7v8RmGfN4o

Comedian Jimmy Dore dissects the infographic in a spot-on manner:

Do you know how many Israelis killed by all of this Hamas violence? Including… today? Zero. Zero.

So when you have people in a prison and you remove all hope, what do you think they’re going to do? Well some of them are going to try and protest and riot and… they’re going to use their ‘weapons’ – you know, their ‘ARSON kites’ against… an Israeli military tank, and sharp shooters…

And then, of course, when you have a ‘burning tire’ – you know how hard those are to fix? …

Hey, do they also have boomerangs? And slingshots?

On 18 May, UN high commissioner for human rights Zeid Ra’ad Al Hussein testified before a specially convened session of the UN Human Rights Council (UNHRC) “on the deteriorating human rights situation in the Occupied Palestinian Territory, including East Jerusalem”.

The most damning part of Al Hussein’s testimony took 80 seconds to deliver:

All of the 1.9 million people who live in #Gaza are, in essence, caged in a toxic slum from birth to death; deprived of dignity; de-humanized by the Israeli authorities to such a point it appears officials do not even consider that these men & women have every reason, to protest pic.twitter.com/beRSQQWh5k

1.3 million (nearly 70% of the population of Gaza) are themselves refugees, forced to live in Gaza by the state of Israel.

Israel controls the air, land and sea surrounding Gaza. Israel is therefore widely accepted as the occupying power of the Gaza Strip by major international organisations, such as the International Committee of the Red Cross – which is recognised as the “guardian” of international humanitarian law.

On 18 May, the UNHRC voted to investigate Israel for human rights violations stemming from the “military assaults on the large-scale civilian protests that began on 30 March 2018”, though the UK abstained.

The 28th Special Session of the Council "Violations of international law in the context of large-scale civilian protests in the #OPT, including East Jerusalem" has concluded.
The draft Resolution has been adopted by 29 votes in favor, 2 against, 14 abstentions. pic.twitter.com/C1MOS6aTPn

It is worth noting, meanwhile, that the UK is not a bystander to Israeli violence. Campaign group War on Want reports [pdf] that:

The UK government has approved over £490million worth of arms exports to Israel since 2014 (military and dual use), consisting of large items (components for fighter jets, gunboats, etc.) and smaller items used for policing protests.

You can see the full list of weapons the UK sold to Israel in 2017 here.

A spokesperson for the Department for International Trade told The Canary that:

The UK government takes its export control responsibilities very seriously and operates one of the most robust export control regimes in the world. We rigorously examine every application on a case-by-case basis against the Consolidated EU and National Arms Export Licensing Criteria, with risks around human rights abuses being a key part of that process.

We will not grant a license if doing so would be inconsistent with these Criteria and will suspend or revoke licences when the level of risk changes.

After recent events, anything other than a suspension of arms licences to Israel would be totally unacceptable.

– Write to your MP and demand that they stop the government from sending weapons to Israel.