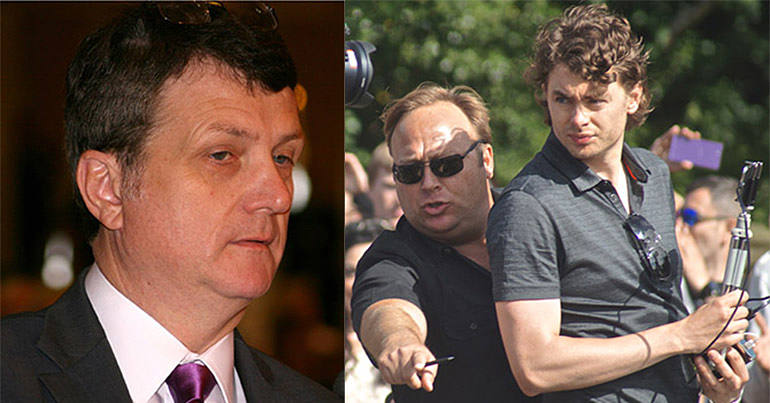 Don’t be complacent about UKIP. Its current leader Gerard Batten is a very dangerous man.

In fact, since he took over the party in February 2018, UKIP has moved so far right that even Nigel Farage is accusing Batten of extremism.

Batten’s violently Islamophobic remarks and support for far-right activist Steve Yaxley-Lennon (aka ‘Tommy Robinson’) have put him in league with reactionary populists like the Dutch firebrand Geert Wilders. And copying his extremist counterparts around the world, the new UKIP leader has a favourite weapon of choice: freedom of speech.

He’s recently been using it to defend one of America’s most famous conspiracy theorists, Alex Jones.

Anyone who’s seen the InfoWars host in action might think Batten is making a quack mistake. But his support for Jones shows the growing dangers of a resurgent [paywall] UKIP. And we should all be worried.

Batten was quick to come to his defence:

Whatever you think of Alex Jones’ Info Wars, YouTube closing it down is part of a programme to shut down alternative media. Yesterday on the BBC it was said, ‘he hasn’t broken the law he has broken their (YouTube’s) laws’. Only the criminal law or the laws of libel should apply.

But his argument falls to pieces under scrutiny.

First of all, YouTube is a private company and it can delete any account it wants if the user doesn’t follow its Community Guidelines. Jones received several warnings from the video platform for promoting racist tropes and fake news before the ban came into place.

He is also currently being sued for defamation. The parents of Noah Pozner, a six-year-old killed in the Sandy Hook massacre, are heading the case against InfoWars. They brought legal action after Jones said the shooting, which left 26 people dead, was a left-wing “false flag attack” and that the parents were “crisis actors”, although he has since said he believes “Sandy Hook happened”.

But Jones’s comments haven’t fazed Batten. He even retweeted a highly questionable petition accusing Twitter of “political terrorism”. Set up on August 1, the document demands that US Congress “stop Twitter censorship and violation of First Amendment rights”.

This is despite the fact that Twitter CEO Jack Dorsey said that it will not block the Infowars Twitter account because, as yet, it hasn’t broken its code of conduct. 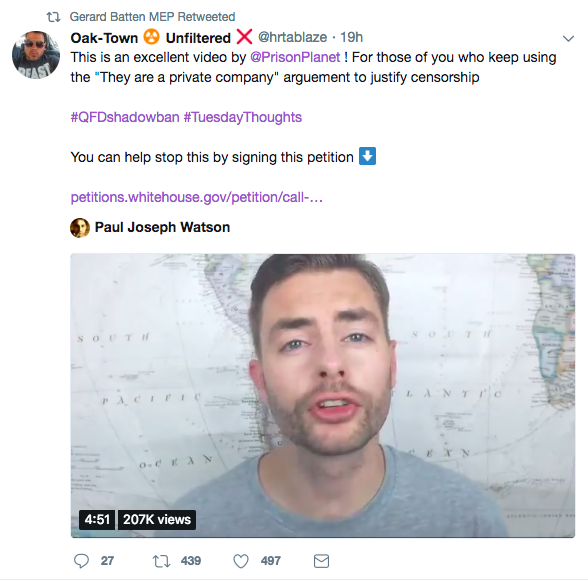 But the case does raise wider concerns about free speech.

Batten isn’t alone in defending Jones. There are critics – including those on the left – who are also guarding InfoWars’ right to publish whatever it likes. Blogger Caitlin Johnstone is one of many to argue that the crackdown on Jones sets a dangerous precedent for Silicon Valley mega-startups to mute dissenting opinions.

While such concerns are valid, we have to draw a line between freedom of expression and hate speech.

In the United States, the 1st Amendment does little to curb the incitement of racial hatred. In the UK and the EU, there is legislation against hate speech, and so there should be. It’s a disgrace that more news outlets aren’t properly penalised for printing racist lies more often.

Wherever you stand on tech giants muting dissenting voices, social media platforms should be working to stop the spread of racism and conspiracy theories. But oddly enough, the UKIP leader doesn’t agree with this.

And it’s because it’s in his direct interest to defend people like Alex Jones.

It’s no secret that Batten and Jones have similarly disgusting opinions, especially on Islam. And if social media platforms can ban Jones for hate speech, they can also ban Batten. The fact that both men enjoy pedalling debunked conspiracy theories is just the icing on the cake.

Here’s the UKIP leader in 2013 saying that the creation of the EU was probably a Nazi plot. And guess who’s interviewing him…

It’s already worrying that the representative of a British party that’s only 4% behind the Lib Dems in the polls is spreading Nazi conspiracy theories. But the reason for UKIP’s recent success is even more chilling.

Since the beginning of Summer 2018, Batten has been posting InfoWars articles on a regular basis, and it’s easy to find out why. One of his new media advisors, Paul Joseph Watson, is the UK editor-at-large for Jones’s media outlet.

Had a great meeting today with UKIP’s leadership team, Paul J Watson & Sargon of Akkad planning our joint strategy. It’s going to be a lot of fun. https://t.co/cOHqtYCxWc

Watson, who started writing for InfoWars in 2002, joined UKIP in June alongside other hard-right YouTube personalities Sargon of Akkad, Count Dankula and former Breitbart darling Milo Yiannopoulos. They all claim to be die-hard defenders of free speech.

Following the arrival of the high-profile, self-styled ‘classic liberals’ (almost everyone else calls them ‘alt-right’ or ‘far right’), UKIP’s membership increased by at least 15%. Batten achieved this mainly by capitalising on the Tories’ failed Chequer’s Brexit deal, ramping up attacks on Islam, and using his new recruits’ social media skills to get the message out.

Also, by bringing InfoWars and Breitbart personnel into the fold, UKIP has struck up an informal alliance with far-right groups in the US.

Ally of Yiannopoulos and former editor of Breitbart Steve Bannon championed UKIP’s favourite martyr Yaxley-Lennon during a softball interview with Farage on LBC. Bannon’s colleagues in the US are, coincidentally, providing Yaxley-Lennon with financial support. And now UKIP has pledged to work directly with Bannon’s new project, ‘the Movement‘, to send Europe ever farther right.

And so by working with the dark figures of the US ‘alt-right’ and appealing to Yaxley-Lennon’s supporters, UKIP has provided a sophisticated political platform for far-right thugs to rally around.

Batten and his supporters don’t really care about free speech. In fact, the UKIP leader commissioned a report that calls for all Muslims in the UK to sign a document disowning sections of the Koran. As is often the case with the far right, some people’s speech is freer than others.

But his defence of Jones sheds light on how UKIP are weaponising freedom of expression to build a dangerous political movement, a National Front for the 21st century.

As Boris Johnson is busy legitimising racism in the mainstream, we need to also be aware of what is happening on the fringes of British politics in the name of free speech. UKIP is no longer a joke. They’re a dangerous movement.

The fact that Alex Jones lost this particular ‘info-war’ is something to celebrate. But in these times, there can be no space for complacency.