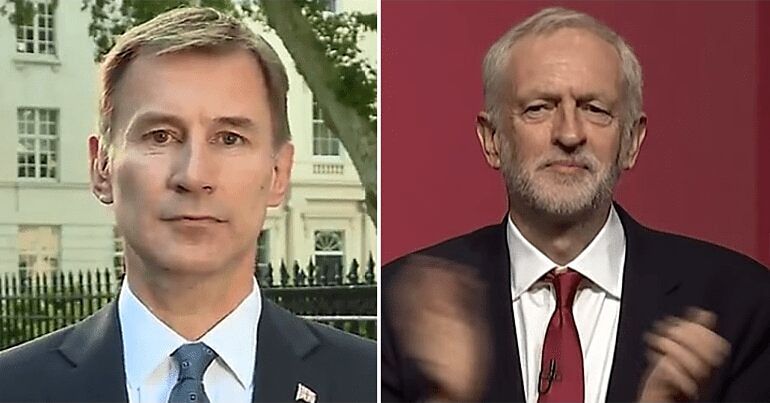 Jeremy Hunt has admitted that Jeremy Corbyn would trounce him in a general election.

is he going to have an election in order to get a majority in parliament for a no-deal Brexit? Because I think Conservative Party members need to know the answer to those questions. I personally think that an election would be disastrous, I think we’d let Corbyn into Number 10

"Sometimes in politics you can fudge, but on #Brexit you can't."@Jeremy_Hunt blasts "disrespectful" @BorisJohnson on #Sunrise after the former foreign secretary declines a Sky News debate.

Hunt openly admitting that Corbyn would bring about a disastrous result for the Conservative Party is quite the change. This is the man that former prime minister David Cameron once attacked as being “unelectable”.

But, in June 2019, Corbyn’s Labour is ahead in the most recent polls, and enjoyed a ten point lead only a month ago in one poll.

Instead, Conservative members alone will decide the next prime minister. Yet this is a government that has presided over:

According to Sky Data, the public isn’t too happy about having no say. Its polling found that 54% want a general election when there’s a new prime minister, while 36% thought there shouldn’t be one.

Frankly, the idea that the Conservatives can simply impose another prime minister on the country is absurd. Yet Hunt is openly admitting that the main reason for doing so is because they’re worried they’ll lose an election. It’s an indictment of UK democracy that there isn’t more pressure from the media to do what’s right.