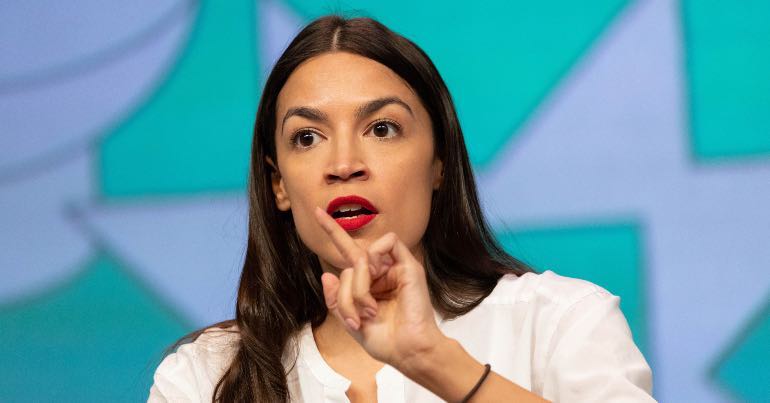 US member of congress Alexandria Ocasio-Cortez has been consistently calling out the horrific conditions in concentration camps on the US-Mexico border. Now, despite what she calls a “violent culture” among border officers, she and a number of colleagues have visited one of these camps. And the stories they’ve shared are shocking.

‘Officers told women to drink out of toilets’

Speaking after the visit on 1 July, Ocasio-Cortez called what she’d witnessed “unconscionable”.

She explained that there was just one toilet in a cell, “and the sink portion was not functioning… so the women were told they could drink out of the bowl”. She also noted that “this is CBP [Customs and Border Protection] on their best behaviour”:

Here’s @AOC outside the CBP station in Hondo Pass. She says the women detained inside are being forced to drink out of toilets. pic.twitter.com/0XerZe2AmB

Her colleague Ayanna Pressley soon backed this up:

Rep. @AyannaPressley backed up @AOC here, saying she’d also learned that detainees were forced to drink from toilets. She also described the “iceboxes” in which detainees are kept to ensure they’re uncomfortable. “It’s cruelty and racism,” she said. pic.twitter.com/iqf5cNZbib

As did congress member Madeleine Dean:

Every single word of this is true. I am horrified by what I just saw. This should not be a partisan issue — it’s a human rights issue. https://t.co/uRYUsIQGhG

The women these politicians met on the visit, meanwhile, feared “retribution” for speaking out about these conditions:

What’s haunting is that the women I met with today told me in no uncertain terms that they would experience retribution for telling us what they shared.

They all began sobbing – out of fear of being punished, out of sickness, out of desperation, lack of sleep, trauma, despair.

Congress member Joaquin Castro backed this up. And he also shared his experience of the visit, saying:

This moment captures what it’s like for women in CBP custody to share a cramped cell—some held for 50 days—for them to be denied showers for up to 15 days and life-saving medication. For some, it also means being separated from their children. This is El Paso Border Station #1. pic.twitter.com/OmCAlGxDt8

He said “all Americans must help to change this system”.

The congressional visit happened just as news broke that thousands of current and former border agents had been joking about people dying and targeting Ocasio-Cortez for abuse:

EXCLUSIVE: Members of a secret Facebook group for current and former Border Patrol agents joked about the deaths of migrants and posted a vulgar illustration depicting @AOC engaged in oral sex with a detained migrant https://t.co/ArddKcsllQ

There are 20,000 TOTAL Customs & Border Patrol agents in the US.

9,500 – almost HALF that number – are in a racist & sexually violent secret CBP Facebook group.

They’re threatening violence on members of Congress. How do you think they’re treating caged children+families?

This isn’t about “a few bad eggs.” This is a violent culture.

And congress members noted that they experienced similar bad behaviour on the ground:

We were met with hostility from the guards, but this is nothing compared to their treatment of the people being held.

The detainees are constantly abused and verbally harassed with no cause. Deprived physically and dehumanized mentally – everyday.

This is a human rights issue.

I can’t understate how disturbing it was that CBP officers were openly disrespectful of the Congressional tour.

If officers felt comfortable violating agreements in front of their *own* management & superiors, that tells us the agency has lost all control of their own officers. https://t.co/zZjNaodplr

I see why CBP officers were being so physically &sexually threatening towards me.

Officers were keeping women in cells w/ no water & had told them to drink out of the toilets.

This was them on their GOOD behavior in front of members of Congress.

And to these CBP officers saying they felt “threatened” by me –

They were literally discussing making a GoFundMe for an officer who attacked my on my tour.

They confiscated my phone, and they were all armed. I’m 5’4”.

Since taking office, Ocasio-Cortez has become a prime target for the US right – in both political and media circles. But she always seems to have the perfect response. After the visit on 1 July, for example, she slammed a Fox News commentator for suggesting the concentration camps were like a ‘house party’:

What was the last “party” you went to where you:
– Were locked in a cage under armed guard
– Drank out of a toilet
– & given food of such poor nutritional value, for so long, that it gave you mouth sores? https://t.co/UfO8EQzRbI

She also denounced Trump ally Kellyanne Conway for calling her a liar:

How many migrant women has Kellyanne Conway touched? Hugged? Sat on a concrete floor with? Actually listened to?

The answer is none. Her actions show she doesn’t believe all human beings are worthy of basic dignity.

That‘s why she defends & muddies the clear and indefensible. https://t.co/NHMeI6Bx5r

And she called the CBP out for lying about her:

And to think this week the GOP & Dem “Problem Solvers Caucus” fought to eliminate ALL accountability amendments from funding.

In short, border authorities and right-wing elites are clearly annoyed that they have such a powerful opponent in Ocasio-Cortez. And so they should be. Because tens of thousands of people are reading and sharing her revelations – and she is clearly a person who will not stop until the inhumane treatment of refugees ends.