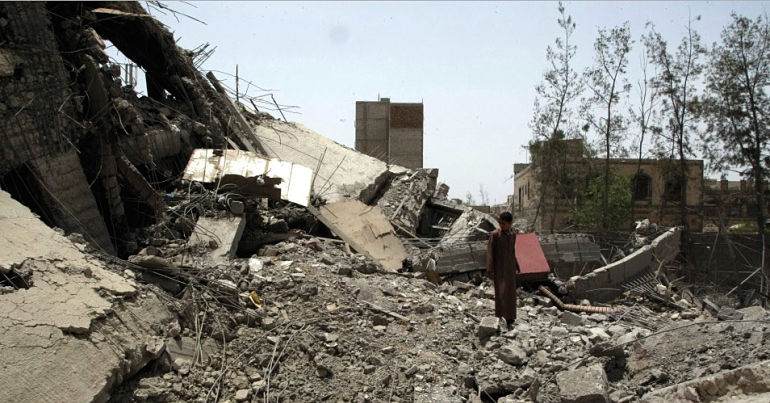 Armed Forces Day sunk to new depths on 28 June 2019 when a British soldier encouraged children to wear military gear in a nursery school in Lincolnshire. The nursery celebrated the event on Facebook and published 18 photos of very young children wearing body armour and helmets.

But what may seem to some as harmless fun is actually part of the government’s “militarisation offensive” which seeks to condition the public to accept perpetual war.

Symon Hill of the PPU said:

I thought I had got used to seeing pictures of children being militarised, but never before have I seen such young children being treated in this way in Britain. Even by the standards of everyday militarism, this is extreme.

“Cheering on our fellow soldiers”

The nursery published the photos on Facebook with a statement that read:

Soldier Dale came in to show and tell us all about what he does in the British Army. The children were fascinated with the items which Dale brought in to show us and loved trying things on, even the heavy body armour.

As you can see, the staff had lots of fun too!!

We finished the morning with an obstacle course, going under, over and through…and of course cheering on our fellow soldiers!

The Canary verified these images but has chosen not to identify the nursery or republish the photos to ensure anonymity for the children.

A day with the family, sponsored by merchants of death

Other sponsors include the Royal British Legion, Help for Heroes, and Wadworth brewery.

The official Armed Forces Day website encourages civilians to salute members of the military and says that Armed Forces Day “provides a much valued moral boost for the troops and their families”. It also describes the role of the British military:

The UK Armed Forces defend the UK and its interests. They are busy working around the world, promoting peace, delivering aid, tackling drug smugglers, providing security and fighting terrorism.

The website makes no mention of the hundreds of thousands of civilians killed by overt and covert wars initiated or inflamed by the British state. For example, one very conservative estimate of those killed by the UK-armed war in Yemen is over 90,000 human beings. The Canary also found no mention of the millions of men, women, and children that UK militarism has turned into refugees from Iraq, Afghanistan, Syria, Libya, Somalia, Yemen or Mali.

Children are being given an image of armed force as fun and exciting before they are even old enough to attend school. Children and young people have a right to hear a range of views on war and peace as they grow up, so that they can form their own opinions as they get older. We urgently need procedures in place to protect children from this sort of behaviour.

Not only do these military visits condition the public into accepting a state of perpetual war, they also seek to condition future military recruits. Targeting children in their first years on this earth is merely the latest proof of this perverse programme. It is therefore crucial that those who oppose perpetual war speak out now – while the right to dissent still exists.