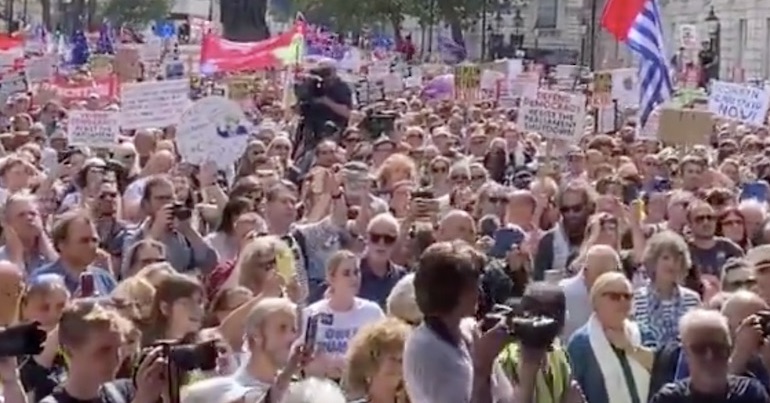 Thousands of people have taken to the streets across the UK to protest against Boris Johnson and his right-wing government’s attack on democracy.

On 28 August, Johnson asked the queen to suspend parliament. Now, as we hurtle towards the Brexit deadline on 31 October, MPs only have two short windows to either secure a Brexit deal or to pass a new one. The process of ending a parliamentary session is formally called proroguing parliament.

Critics, including Labour leader Jeremy Corbyn, believe it’s an attempt to force through a no-deal Brexit. Shadow chancellor John McDonnell has described it as a “coup”.

So on 31 August, thousands of people gathered in London:

LOOK AT THIS 😍@BorisJohnson, you can't claim to represent the will of the people. We didn't vote for you and you don't speak for us.

“What we are seeing is naked aggression by a ‘Brexit Elite’ against the people of this country” @BarryGardiner “I am getting a new sleeping bag” @DawnButlerBrent on parliament Bring Prorogued and occupying the green benches pic.twitter.com/MXazACvjp2

With an aim to cause as much disruption as possible, some people also blocked Westminster Bridge:

“Smash and grab raid on our democracy”

Corbyn, meanwhile, thanked those who protested in Glasgow and criticised Johnson’s “smash and grab raid on our democracy”:

I thank everyone who has taken to the streets here in Glasgow and across the whole country to oppose Boris Johnson's smash and grab raid on our democracy.

We'll do everything possible to stop a disastrous No Deal for which this Tory government has no mandate. #DefendOurDemocracy pic.twitter.com/5tgRT4EjHw

And protests took place around the country:

Plymouth, Glasgow, Bristol, Leeds, not necessarily in that order.. Just a few of the protests today. #DefendOurDemocracy #ThePeopleVJohnson pic.twitter.com/GyifPogUth

Hey #SkyNews #bbcnews we have protest in our country to #DefendOurDemocracy why don’t you show some balls and cover it instead of covering up for a tinpot dictator Johnson pic.twitter.com/BqLahZ4chf

We’re not even a week into Johnson’s disgusting attack on democracy, but the people are rising, revolting, and long may that continue. One thing’s for sure if we want to stop Johnson, these protests need to be louder and more disruptive than ever before.